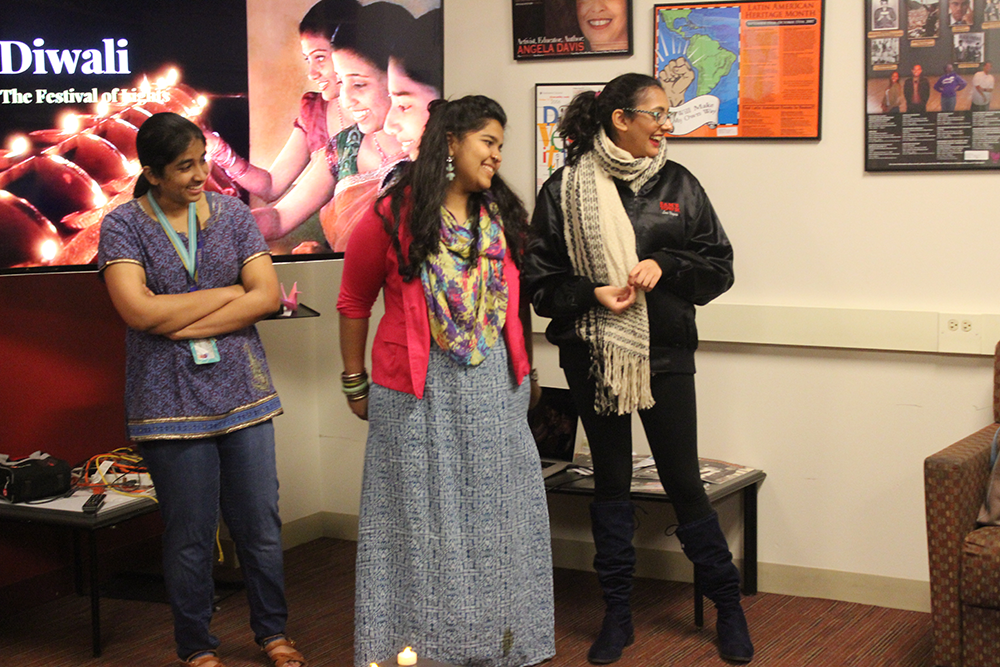 Emerson students have the chance to interact with South Asian cultures a little more every Tuesday night.

Desi is the first org of its kind on Emerson’s campus. Aparupa Balasubramanyam, a junior visual and media arts major, is one of the co-founders of this group. She said she got the idea to start the club after working as an orientation leader, during which she found out that the incoming class of international students was of a South Asian majority.

“I thought about how there was still no org for us,” Balasubramanyam said. “A lot of Americans I had talked to of South Asian origin talked about how they felt disconnected to their culture growing up, or they tried to reject it, or they weren’t really met with positive attitudes when they tried to embrace it. No one should be feeling like that.”

Balasubramanyam said that those factors motivated her to start the club. She said she felt that everyone should have a place where they feel comfortable talking about their culture. It also gives an opportunity for anyone of any background or culture to learn more.

Balasubramanyam, the president; along with Vice President Devika Syal, a junior journalism major; and junior journalism Treasurer Brihathi Cherukuri started the club with bi-weekly events ranging from movie nights to discussions. As the club looks to expand, they have had events every week this semester.

The meetings range in topic and activity. Syal said they usually start with a powerpoint explaining the topic, then either perform an activity or open the floor to questions and discussion. Some meetings  showcase a style of art, or a cultural aspect.

Each meeting features a variety of South Asian food ranging from idli, spongy breakfast cakes served with sweet mango and flavored with garlic and spices acher on top, to samosas, a fried snack.

“It’s a club for anyone to go and learn about another culture by experiencing it through stories and great food,” explained Olivia Kelliher, a freshman visual and media arts major, at the meeting last Tuesday.

Desi hopes to host nights in the near future where people will be able to try woodblock printing, the Eastern Asian technique of using a carved wooden stamp dipped in ink to create patterns on textiles and fabrics.

These events are made to help people learn new things about their own culture and the culture of others.

“We are trying to make it fun because I know that a lot of people who come to our events want to learn,” Balasubramanyam said. “While we want them to do that we don’t want to make it too lecture-like where it’s like, ‘Oh it’s another class that I have to go to.’ Instead of just coming and listening at our events, they have something to do.”

In October, Desi held an event based on the ins and outs of Indian culture, which showcased the fashion, traditional dance, culture, and food.

“Everyone has heard of this country, but they don’t really know a lot about our culture,” Balasubramanyam said.

Syal, whose family is from Northern India, said this is apparent even within the Indian culture.

“I didn’t know anything about South India,” Syal said with a laugh. “If I’m Indian and I don’t know that, how would we expect other people to?”

The organization is also making sure to focus on specific areas of these countries and their traditions—acknowledging and dismantling the stereotypes that these massive countries are the same throughout.

Sydney Rae Chin, a sophomore visual and media arts major originally from East Asia, has attended multiple meetings and said she was satisfied to see new orgs about this culture emerging.

“It is a good way for other people to find home,” Rae Chin said. “I think it’s growing and it’s going to continue to get better. It’s nice to see multicultural groups grow.”

All of these events are currently being paid for out-of-pocket, as Balasubramanyam looks forward to applying for Student Government Association recognition, which comes with funding.

They meet every Tuesdays from 6 p.m. to 8 p.m. in the Cultural Center.

“I feel like at Emerson it’s hard to find a connection in South Asian culture,” Syal said. “We can get together and talk about issues, or even just joke about things in our culture.”