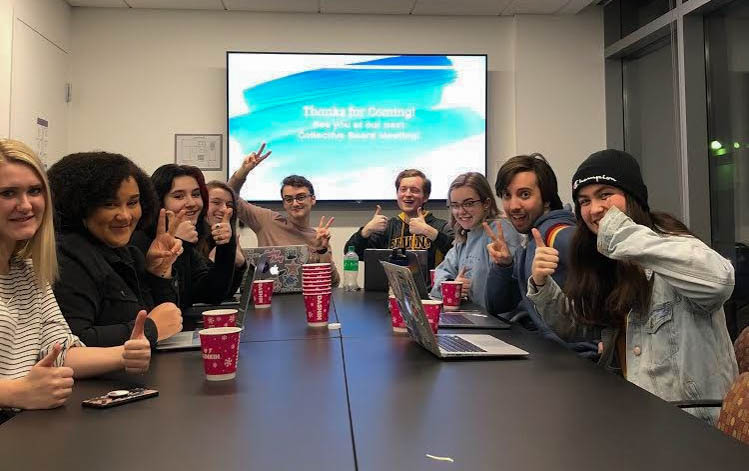 Late one night in October 2019, freshman Garrett Traer sat in his dorm room writing a pitch for the Musical Theatre Society of Emerson College, a student-run organization that produces fall and spring musicals.

Traer said he began questioning whether his pitch fit the contemporary pop-rock genre that Emerson theater groups tend to focus on, sparking a conversation with his roommate Anthony Allocca about how they could address the lack of attention given to other genres.

Traer and Allocca, both performing arts majors, created Musical Theatre Against the Grain in mid-November 2019. MTAG is an organization focused on furthering musical theater opportunities on campus and shedding light on less mainstream genres.

“It’s almost like we’re all being focused on one genre of theatre, but there are other avenues that people should be ready for in their professional careers as well,” Allocca said in an interview. “Quite literally, we [want to go] against the grain and do all these contemporary shows that aren’t pop-rock, anything golden age, jazz standards, you name it.”

Traer said the group’s name came easily to him and Allocca on the same night they decided to create the group.

“We were trying to figure out [a name] that was short and to the point but that didn’t lock us in, because ‘against the grain’ is a very broad term, so we wanted to find that happy medium,” Traer said in an interview. “We like MTAG as an acronym and it worked really well so that’s what solidified that idea.”

MTAG’s first performance debuts on March 11 at 9 p.m. at the Cabaret. Traer said the show consists of 20 acts, which include a combination of duets, trios, and solos that directors Traer and Allocca assigned to cast members. The performances include musical theatre genres such as golden age, contemporary bluegrass, folk, jazz, and broadway standards.

“With cabaret’s on campus, they usually have a theme,” Allocca said. “We’re calling [ours] the MTAG Debut Cabaret [and] we basically just want to show [that] this is our brand, so it doesn’t have a specific theme, it’s just showing the people what we are and what we can do with the future.”

MTAG started out with an executive board of nine members, including Traer and Allocca. On Feb. 10 and 11, they held common auditions. The group has since expanded to include 13 board members and faculty advisor SiouxSanna Ramirez-Cruz, as well as 14 cast members who will perform at the “MTAG Debut Cabaret!”

“The thing that made [the creation of the group] so smooth was the fact that there really isn’t anything like it and people would so easily hop on because they agree,” Traer said, “It was very easy to get people involved, so we never really had a personnel issue because a lot of people feel the same way.”

Freshman Kandyce Whittingham said that MTAG’s focus on non-contemporary musical theatre genres will allow students to explore classical pieces while looking at them through a modern lens.

“I think there are misconceptions about ideas in golden age musicals or more classical pieces [that] are outdated or [that] don’t align with beliefs that we have now,” Whittingham said in an interview. “There’s the huge misconception that we’re not allowed to take a look at older [pieces] that are problematic, but I think there’s something really cool about being artists who are able to look at what’s wrong with it and enter into something that’s radical and revolutionary.”

Whittingham is the treasurer of MTAG and a member of the cast. She said she is excited about the opportunities that this group will open up for her and others within the Emerson community.

“As a person of color and as a woman, it’s hard to see yourself on stage if the content is a lot older, so I hope that Emerson audiences and cast members find something that they never thought they’d be cast in, they actually get to see themselves in,” Whittingham said.

Allocca said they chose the Cabaret for their first performance so they can set their footprint and show the Emerson community who they are. In the future, Traer said the goal for the group is to put on at least one musical each semester, similar to the format of other group’s on-campus such as Kidding Around and MTS, with an annual Cabaret performance as well.

“For me, the long term goal is to fill the gap that wasn’t full so people in the future don’t need to make their own outlet to perform these works,” Traer said. “We’re really happy about it and it just shows that people out there want to perform [these genres] as well, so it’s leading to a bright future.”