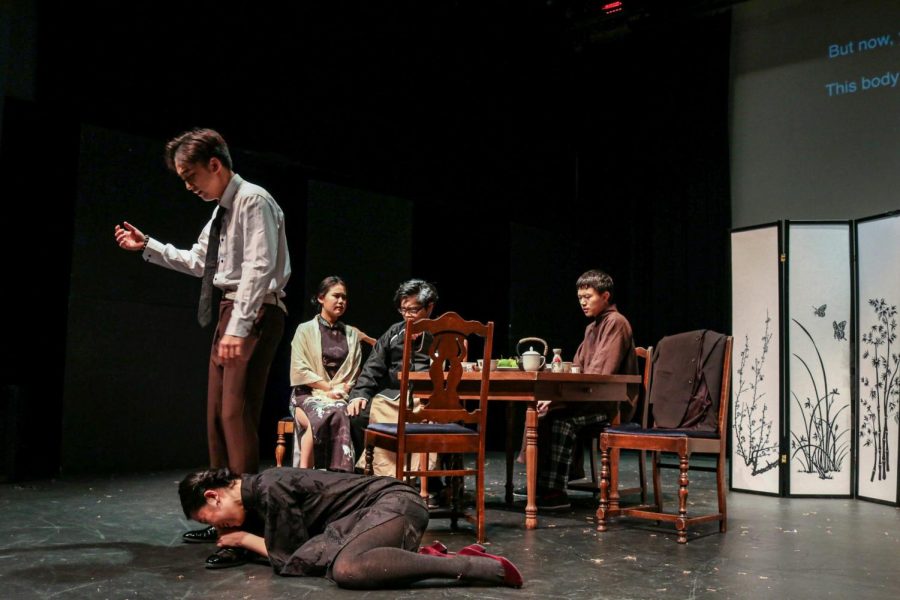 Two students dressed in traditional Chinese clothing faced the audience and spoke indirectly to each other in Mandarin from opposite ends of the stage at the Greene Theater as they rehearsed the first scene of Chuang Stage’s fall production.

At the beginning of July, senior Alison Qu and graduate students Qianru Wang and Shuyu Zheng, the founders of Chuang Stage, discussed ideas over the phone and compiled reading reports for Chuang Stage’s next play. Having studied Chinese classical literature as an undergraduate at the National Academy of Chinese Theatre Arts, Zheng proposed an exploration of the complexity of Chinese women, which resonated with the other two founders.

By the end of August, they selected and combined excerpts from four 20th-century classical Chinese plays to create an original that focuses on Chinese women from a contemporary perspective. The play, which is Chuang Stage’s second production, is called A Tale of Four Women – The Reimagined Chinese Classics. The show was performed on Dec. 3 and 4 at 7:30 p.m. in the Greene Theater.

Founded last semester, the theater group performs plays in Mandarin. Sophomore and director of Chuang Stage Devina Fan said the group is not Emerson exclusive and includes Mandarin-speaking college students from other schools in Boston.

The production comprises 18 actors and 22 production members, according to Qu. Each day, the group practices a different excerpt, and the rehearsals can go for four hours on weekdays to eight hours on weekends.

The selected excerpts in the play are called The Wilderness, The Family, The Thunderstorm, and The Golden Cangue. Each excerpt reflects societal issues of the 20th century, including arranged marriages, gender power dynamics, and contradicting mindsets due to generational differences.

“We wanted to center [the play] around female characters,” Qu said. “Not just a plain beautiful woman, [but] a woman with some sort of desire and will, and her experience has to reflect the society and the social constructs of that time.”

Upon reading the play at the beginning of the semester, Fan said she chose to incorporate a narrator that introduces each scene to the audience. In China, many stories are performed in tea shops and incorporate a storyteller, which Fan said inspired her creation of the narrator.

“I didn’t want to present the play directly to the audience because I don’t feel like they could get the message of it,” Fan said. “Having a narrator to explain each scene would help the audience understand the big picture.”

Qu said all the plays put on by Chuang Stage are performed in Mandarin because she feels she has a duty to keep the Chinese classics authentic and in their original language. These plays wouldn’t be the same if they were performed in English, as they would lose certain meanings and nuances that native speakers understand, she said.

Qu recognizes that for non-Mandarin speaking audience members, there is often a limitation to how much they can understand, so the actors rely on theatrical language as a form of translation. She said she hopes that the theatrical language will translate to the audience effectively.

“There’s a certain beauty and a certain art in not understanding,” Qu said. “When you realize that you just don’t understand the language, you start to look at the form, the acting, the staging—you look at the overall impact on you. You’re shifting the focus away from language and [toward] the form of art.”

Freshman Jared Guo co-starred with Qu in The Golden Cangue. Guo said that he got to develop and practice his theatrical skills during rehearsals.

“We broke down into parts and smaller groups … We sat in a circle to talk about our characters, and we did our rehearsal [line by line],” Guo said. “There’s a member who didn’t have much experience … so we helped him a lot with the body movement and volume, and this kind of helped me to build my character.”

Fan said there were subtitles incorporated for the Dec. 3 performance; however, the theatrical language was still a focus area for the group.

“Every actor is very dedicated to our play, but [some] didn’t have professional training of their language, voice, and bodies, so we did put a lot of time on making [sure] their volume was up and … exaggerating their expressions,” Fan said.

Fan said that the actors also derive the emotions of their characters from their personal lives, which helps drive the story’s message and translates it to the audience.

“I would probably want [the audience] to understand not only the Chinese culture or family rules or traditions, but also the feelings of these characters,” Guo said. “I want them to be put in the shoes of every character. I want to express the feeling of my character, and I hope others can get [that] feeling.”