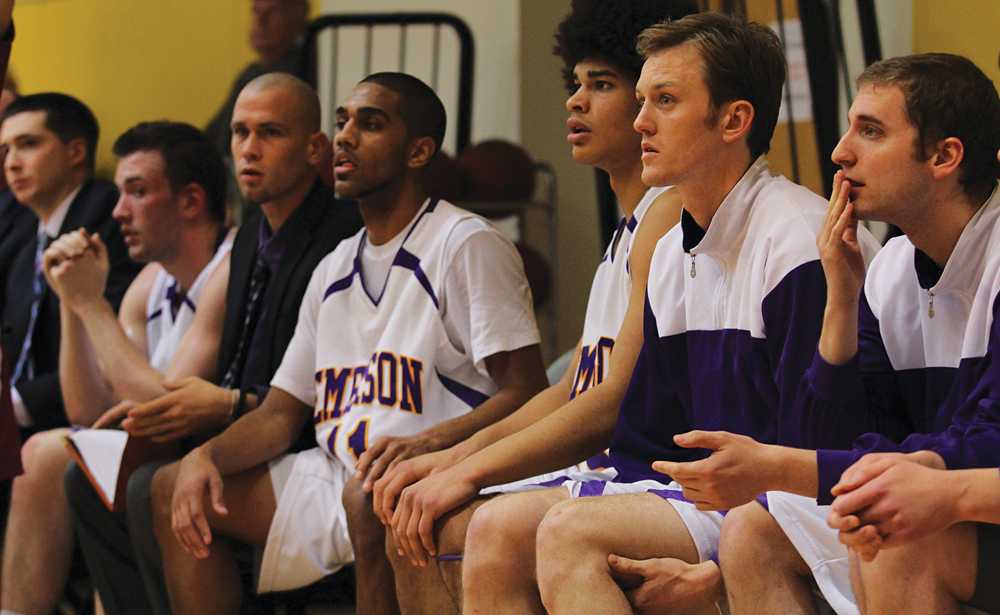 It’s rarely a seamless transition becoming a new coach at a new school, even in the best of circumstances.

When Jim O’Brien took the reins as the head coach for the Emerson men’s basketball team this summer, he took over a team that had not only graduated two of its most experienced starters in Kabir Moss and Tom Messinger, but one that changed coaches three times over the course of the final month of last season.

Now, over halfway through the Lions’ first campaign under O’Brien’s coaching system, new additions to the roster have jumbled things even more.

Emerson’s starting lineup has seen multiple incarnations, with 10 of the team’s 16 players having started at least one game. The Lions have experimented with different players at center, with Dan Bisaccio and Alex Yoh seeing time. O’Brien has also occasionally used four guard sets or started freshman Patrick Lowndes at forward in lieu of using a pure center. Emerson lacks the height at center compared to other teams in the conference.

The Lions have struggled to win games so far this year, with their lone win coming against Suffolk University. Emerson is now 1-16 overall.

O’Brien said that while having an abundance of players adds depth to the team, it can be challenging to bring them up to speed with the new coaching style.

“It would even be hard if it was the same system they were accustomed to, so not only are they behind, but they’re behind on a completely new way of doing things,” O’Brien said. O’Brien’s system differs from the old in a variety of aspects, including the shift from man-to-man to zone defense.

O’Brien added that he thinks 16 players is too many, and it becomes hard to find playing time for every athlete. Yoh and Eric Wahl, who both had started during earlier stretches in the season, are now seeing more sporadic minutes.

Seniors Carlos Negrete and Alex Dempsey rejoined the team after both spending a semester away from basketball. Negrete missed the first half of the 2011-2012 season while studying at Emerson’s Los Angeles program ; Dempsey sat out the first half of the season for undisclosed reasons. Dempsey and Negrete’s return has come in the midst of an 11-game losing streak.

Senior captain Brett Smyth is also back in action after missing eight games with a hip injury sustained before the season began, while sophomore Nick Welch has seen playing time after transferring into Emerson for the spring semester. Welch played basketball for Springfield College as a freshman before taking time off from school this past fall.

O’Brien said Smyth’s return to the court has helped boost morale, adding that the guard is a great teammate.

“His motor is always going,” the coach said. “Just the fact that he’s out here giving it a shot is a testament to him. I love his intensity. Even if he’s not playing, you can hear him supporting everybody.”

Dempsey said he is glad to have Smyth back and that the team captain is a vocal leader on the court.

“Brett’s an awesome energy guy,” Dempsey said. “He really picks us up and gets us going and a lot of times you need that.”

O’Brien described Dempsey as a “physical specimen” and a strong defender.

“I just want to help wherever I can, whether it’s penetrating and shooting or helping on defense,” Dempsey said. The visual and media arts major added that the competition for playing time has helped further motivate the team.

“There’s so many players and only so many minutes, and people are really fighting for them, so we’ve had some intense practices,” he said.

While Smyth and Dempsey typically play guard or forward, Welch’s arrival gives the Lions a pure post player down low.

“Nick brings a little bit of toughness and the ability to score and rebound in and around the basket, which is something we definitely need,” O’Brien said.

Welch, who came to Emerson to study marketing communication, has seen a steady rise in minutes. Welch said that it was challenging getting back into basketball form.

“I jumped in in December. I did as much as I could back home, but it’s definitely a different feeling getting onto the court,” said Welch. “It’s been difficult, but slowly but surely I’ve been getting back into shape.”

With leading scorer Nathan Firn out with a foot injury, and the players continuing to find their roles within the team dynamic, O’Brien said stabilizing the rotation is one of the biggest keys to finding consistent success.

“I don’t think that we have someone who can give us what Firn was giving us every night, but if we can do it by committee, that would work also…We’re always tweaking who we’re going to play,” O’Brien said. “It’s open for anybody. We’re just waiting for guys to break out of ruts. I think it would go along way towards helping if we’re able to settle into a set routine.”