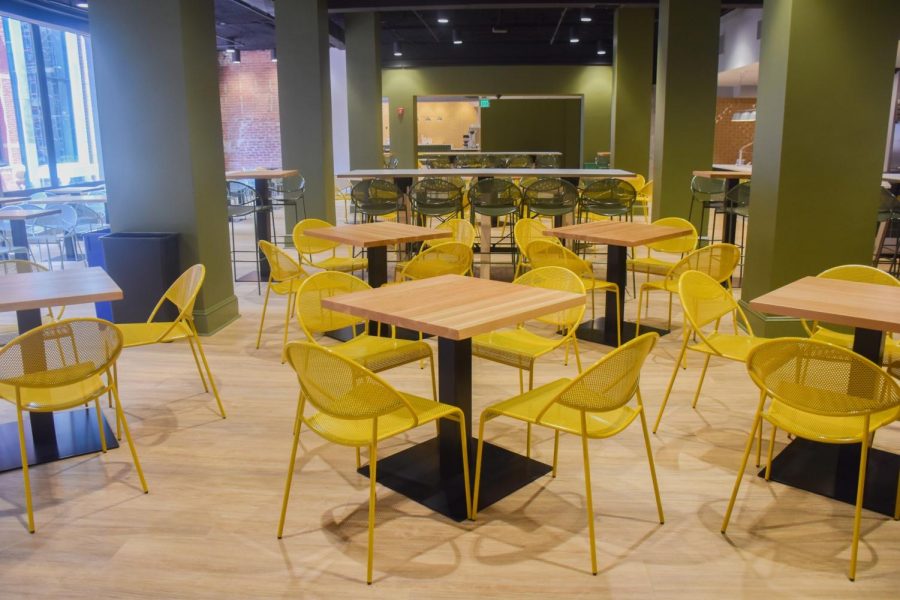 President M. Lee Pelton called for defeating bigotry and racism in a speech Wednesday at the college’s first Creative Expression Against Hate series in the Lion’s Den.

Provost and Vice President of Academic Affairs Michaele Whelan organized the event along with members from other college departments to combat the recent hate graffiti that appeared on campus earlier this semester and as an outlet for students to express their feelings and concerns.

“To take a stand, to make a stand and our various responses today are deeply rooted in the college and understanding that the diversity of our community is one of the greatest things about being a community,” Pelton said. “Emerson is and will continue to be a welcoming place for all of us and not only in theory but in tactics.”

This event followed the two incidents of graffiti that were found on campus in January. The first was anti-semitic graffiti found in a stairwell in Piano Row on Jan. 22, and the second was offensive graffiti found two days later in the living areas of the Little Building on Jan 24.

Pelton asked Vice President and Dean of Campus Life Jim Hoppe and Vice President for Equity & Social Justice Sylvia Spears along with Whelan to work with Emerson College’s Hillel student organization and other groups around campus to determine how the community should respond to the two instances of hate graffiti.

“I think the point of today is a starting point for our community,” Hoppe said in an interview with The Beacon.

The event featured a light lunch for those who attended and a photo station, a poster station, and a suggestion box for students to give feedback about what the college can do to combat hate on campus.

Assistant Dean for Campus Life Chris Daly helped stock the event with art supplies for students to create drawings that will be hung up around campus.

“This specific event was to give people an outlet early on to express some of what they might be feeling either about the hate graffiti incidents themselves or about how we as a community respond to that or how we can move forward from that,” Daly said. “It does seem to me to be a very Emersonian way. It can’t be the only response but as part of an overall response it does seem to be very in line with arts and communication.”

Pelton and Spears gave brief speeches at the launch, encouraging the college community to embrace diversity and inclusion.

Junior Carolina Donoso attended the event and drew pictures depicting her concerns about the graffiti.

“My drawings have been, kind of like, [statements] to not be complacent on the things that are happening,” Donoso said. “Especially if it’s happening on a campus that is supposed to be safe for everyone.”

Junior Michelle Campos said that it was hard to ignore how people have been affected.

“There have just been so many emails about this topic on campus and it’s just so surprising because of all places, of all schools, Emerson to be the place?” Campos said. “It’s supposedly an inclusive place, it’s just sad. I’m really happy that this is the first of many [events]. I came because this is all very upsetting and although I don’t feel personally targeted it’s just still upsetting.”

Students and staff created artwork at the event bearing messages like “this generation is going to change the world,” “our voice is louder than you think” and “create love.”

Caitlin Dimartino, director of learning and development, sat with a group of other staff members from the Human Resources Department as they all drew pictures and chatted.

“I think the approach that they took of engaging people creatively goes a long way toward making people feel empowered and invested in helping make that change,” Dimartino said. “So, I think that was a really good approach for an event like this.”

The series will continue throughout the semester and into next year. Hoppe said they are plans in the works to have speakers and panels at the college.

The Center for Spiritual Life hosted lunch for Jewish faculty and staff to come together and talk about the recent anti-semitic graffiti on Friday, Feb. 4 as part of the new series.

The Intercultural Center is also planning a response to the anti-Asian graffiti, Daly said to The Beacon. The date is still to be determined.

“This is an opportunity to engage. There is no one way to make a change we need to make a variety of ways to do that,” Hoppe said.