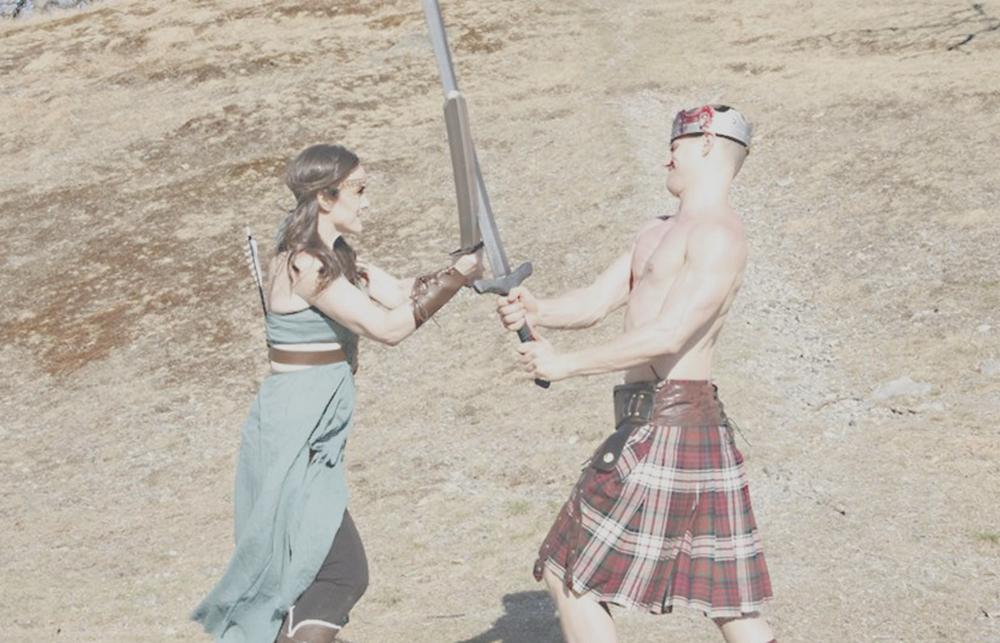 MALDEN — The scene is tense. The Archer Queen stands poised at the bottom of a hill with a large bow in hand. The Barbarian King stands atop the mountain, bare-chested and wielding a sword. A battle and explosions are imminent. Suddenly a radio set crackles, and the voice of sophomore Scott Louthan, founder of Emerson Professional Shots, Stunts and Safety, is heard asking if the Archer Queen is ready and if all safety precautions have been taken.

This is exactly how Emerson’s new film group wants to operate, according to its founder and board of directors — producing fun, ambitious content while learning how to execute them according to Hollywood safety and professional standards.

This core belief was applied to every aspect of the group’s film, The Hand of War, set to be released to its Facebook page in summer 2014. Bethany Spreadborough, a freshman visual and media arts major who was the production designer during the film shoot April 12, said she learned there were many aspects of the process that had to be well thought-out to make sure no one got hurt. For instance, the crew had to build an eight-foot wall that would be blown apart by four air cannons that applied 270 pounds of pressure. Spreadborough was taught to make sure the wall was constructed out of material that wouldn’t create dangerous projectiles when blasted apart.

Each member of EPSSS is guided in the same way as Spreadborough. The roughly 20 members learn the basics of safety procedures, practical effects, and special effects during workshops and meetings. Elizabeth Reid, director of marketing and public relations for EPSSS, said the group tried to have meetings every few weeks throughout the semester to prepare for filming. On the morning of filming, they held two meetings before they began shooting.

Louthan, a visual and media arts major, said he knows other noted film schools like the University of California Los Angeles and the University of Southern California, have Hollywood right in their backyards, meaning easy access to hands-on internships and other luxuries.

Louthan thought he would try to bring the Hollywood experience to Emerson by creating a club that is nothing short of professional. He said EPSSS was founded to provide greater opportunities and freedom to “do the projects you want to do” as film students who want to churn out high-quality work.

The club was also founded to provide a better understanding of production safety procedures, keeping in mind the nearing three-year anniversary of the death of an Emerson junior who fell off a five-story building while filming a project.

“That event kind of changed the school, in terms of being on set,” Louthan said.

After the incident, Emerson hired Leonard Manzo to be director of production and safety for the film department. He is now the advisor for EPSSS.

At first, Manzo said he was unsure of how the student body would receive his position.

“Students really embrace it,” Manzo said. “They want to know how to do it right.”

Benjamin Garmise, a junior visual and media arts major and co-director of EPSSS, said tragedies like the death a few years ago are the reason why a club like this needs to exist.

“The passion and desire at Emerson are high,” Garmise said. “If we can harness that passion and be safe at the same time, that’s good.”

According to Reid, EPSSS hopes the experience of harnessing that passion doesn’t end with The Hand of War.

“The next step is getting SGA approval,” said Reid.

Until then, the organization plans to launch another crowdsourcing campaign that will run over the summer. The end goal is $10,000, enough to fund a yearlong film project for next year. The money will be raised through Go Fund Me, with 10 percent of the total given back to the site and another 10 percent going to charity, according to treasurer Ryan Shaw, a freshman visual and media arts major.

The charity of choice is undecided at the moment, according to Shaw, but will probably be selected by a vote. This was something stressed by members of EPSSS—that all decisions and discussions, about safety or otherwise, are to be made as a collective group.

“We’re all working together to do this; they take everyone’s input into consideration,” said Spreadborough.

This means everyone, from the Archer Queen to the peasant, has an opinion in the EPSSS kingdom.

Later on, the scene is once again tense. Actors stand in front of the camera decked in fierce war costumes, poised for battle. A sword is lifted with menace. All of a sudden, the scene is halted. “Scott’s telling them to move the swords away from the camera, to be safe,” Reid explains. It turns out The Hand of War is pretty gentle.