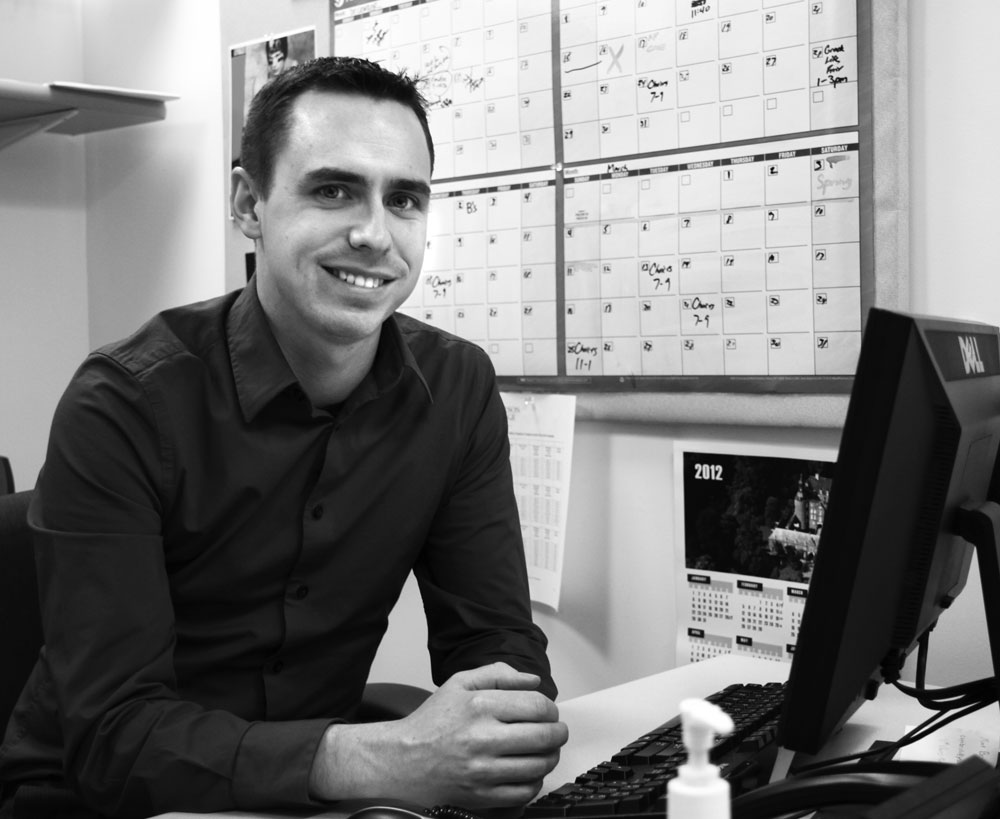 Chris Chernicki entered his office in the Center for Health and Wellness wearing a vibrant blue dress shirt that contrasted the outdated furniture and décor of the room. His youthful personality was evident as he sat down at the small table in the corner of his office.

Chernicki, a 27-year-old from Quincy, Mass., filled the postion of coordinator for health and wellness education in December after interim head Gregg Clapham left.

One of Chernicki’s goals for the college is to bring LGBTQ health issues to light.

“For the most part, the disparities lie within communication,” Chernicki said. “It has been shown that it is difficult at times for members of the [LGBTQ] community, and health care providers to begin an open dialogue about certain health/wellness topics.”

LGBTQ health has been a prominent part of Chernicki’s career. He said one of his goals in the position is to reform LGBTQ medical care, as the college has not focused much on that area of health before.

“It’s a focus I had going through, with a concentration on youth 20 and under,” he said.

After being an EMT for almost five years and working at Fenway Health, Chernicki said he is excited to focus on LGBTQ health issues at Emerson.

With Emerson ranking as the number three LGBTQ friendly school according to the Princeton Review, the Center for Health and Wellness accommodates the LGBTQ community by welcoming all types of students and their problems to the center, according to Chernicki.

Regina Lutskiy, the LGBTQ commissioner for the Student Government Association said the health center has always been amenable.

“They can really help a student who is struggling emotionally with their sexuality. There is a lot of information available for students. Overall, Health and Wellness are very accommodating,” Lutskiy said.

Along with LGBTQ-related issues, Chernicki said he deals with nutrition, stress, sexual health, and substance abuse.

“I feel that our overall goal is to keep the student body safe and healthy,” he said.

Chernicki said he believes all colleges have a need to educate students about substance abuse, and Emerson is not any different.

As the coordinator of wellness education, Chernicki also teaches students through social media and graphic arts. He oversees the centers Twitter account and a Facebook page to provide students with health advice.

“These are subtle educational opportunities that can be found around campus and the web,” Chernicki said.

He also said the center plans to have a bigger presence at on-campus activities, in the fitness center, and in the residence halls. Ultimately, he said he plans to change the image of his position.

“I want students to be comfortable when they have a question and to build the overall wellness picture at Emerson,” Chernicki said.

As a new member in the Emerson community, Chernicki said he hopes to inspire students to make the right choices for their future.

“If people have had access to proper education around issues pertaining to their health, they can then make educated choices for themselves,” Chernicki said. “Our goal is to purely educate in a nonjudgmental form and allow the students to make their own decisions.”