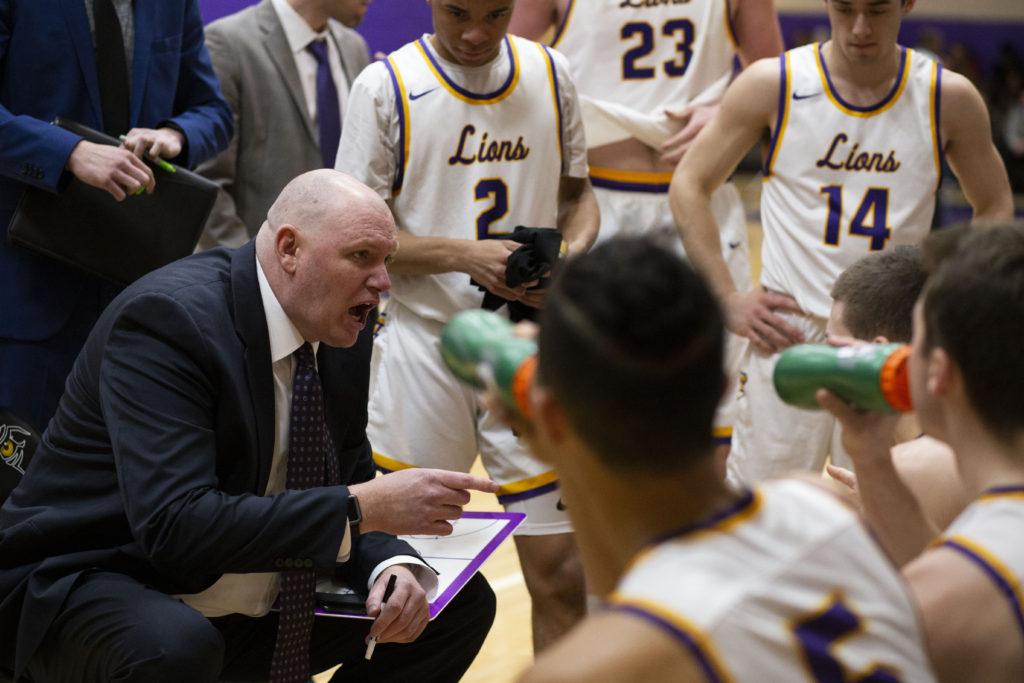 Head coach Bill Curley and the men's basketball team during a timeout.

By Christopher Williams and Domenic Conte

Two of the three winter sports teams at Emerson, the men’s and women’s basketball teams, play in the NEWMAC and will not be able to compete in the conference this winter. The men’s volleyball team, which plays under the Great Northeast Athletic Conference, has not yet received word on whether or not their conference will hold a season.

“The decision was a difficult one, because we all understand the disappointment and frustration that our student athletes and coaches and staff feel, but it was made to ensure the health and safety of the entire campus community for all of our NEWMAC institutions,” Athletic Director Pat Nicol said in an interview.

The basketball teams are in their third week of practices and are able to compete against out of conference programs as they please in accordance with NCAA Division III regulations and institutional, state, and local health and safety guidelines.

According to the statement posted on their website and shared on Instagram, the decision largely came down to the shift in academic calendars, as well as the restrictions on campuses that limit the exposure of COVID-19. Nicol said some NEWMAC schools are starting as late as the last week of February.

“With such a wide range of return dates, it was difficult to put together a NEWMAC schedule,” Nicol said. “Due to the resocialization guidelines, it only left a few weeks for actual competitive play. And the other consideration was, as well, respect for each institution’s protocols.”

Nicol told The Beacon in September that the council was initially targeting a decision towards the second week of November.

“An answer needed to be rendered sooner rather than later,” Nicol said. “Everybody just wanted an answer so they could plan to move forward.”

Local schools which compete in the eleven-team conference include Babson College, the Massachusetts Institute of Technology, and Wellesley College.

The Council, which consists of the presidents of each of the colleges that participate in the NEWMAC, including President Lee Pelton, will now turn towards discussing the fate of the 2021 spring sports season.

Senior student athletes affected by the cancellation are able to receive an additional year of eligibility, Nicol said.

“I feel so badly, so badly for our student athletes,” Nicol said. “As a former student athlete, I can’t imagine what it’s like to have a season taken away, especially for a senior. I just hope they understand that these tough decisions are made to make sure they stay safe and healthy.”