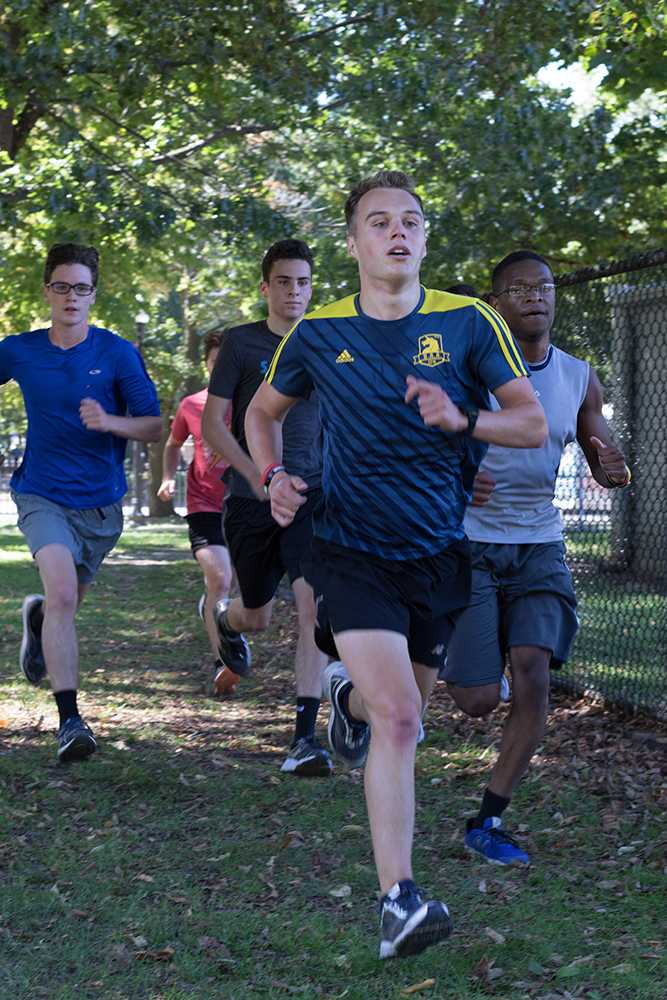 Both Emerson’s men’s and women’s cross country teams are four meets into their season, and are predominantly young. Despite some finishes in the bottom half of the field so far, head coach John Furey said he still has a positive outlook for the NEWMAC championships.

“For NEWMAC championships, which is really competitive, we could beat two or three teams on each side for the men and women,” Furey said. “Then, at the end of the year in the NCAA meet—which there is about 55 teams there—the goal is usually to be in the top 35 or 40.”

In its first meet, the UMass Dartmouth Invitational on Sept. 23rd, the women’s team finished 30th out of 40 teams in what Furey described as a very competitive meet. The squad was led by freshman Madison Lynch (106th), senior Nina DeSilva (167th), and sophomore Jeannette Mooney (170th). The men finished 31st out of 40 teams, and were led by freshman Joseph MacNeil (141st), junior Ethan Michaud (192nd), and senior Anthony Zambito (198th).

The second meet of the season was the Pop Crowell Invitational at Gordon College, and the women finished fourth out of 12 teams, while the men finished fifth out of 13 teams. The women’s group was led by Lynch, Mooney, and senior Cristina Ashbaugh. On the men’s side, the top three finishers were MacNeil, Michaud, and freshman Owen Murray.

The fourth meet of the season, the Saints Invitational, came on Oct. 13th at Franklin Park. The women were lead by Lynch (18th), DeSilva (52nd), and Mooney (62nd) on their way to an 11th place finish. The men finished 13th behind performances from MacNeil (63rd), Serrano (78th) and Michaud (89th).

Joseph MacNeil has been the squad’s top performer for the first four meets.

Captain Ethan Michaud said the team has only two returning runners from last season, and is largely full of freshman. While a season so heavily dominated by underclassmen would often be considered a rebuilding year, Michaud sees this squad growing quickly.

“It’s tough coming from high school to college. You switch from the 5K to the 8K, so that’s two extra miles you have to run in the middle of your race,” Michaud said. “They all adapted really well in that first race, got a feel for it, and then in that second race we had a lot of [personal records].”

Michaud also said he has high hopes for the rest of the season, despite the inexperienced roster.

Women’s team close to best ever

Maddie Lynch has been the team’s top runner, leading the way in the first four meets.

Coach Furey had high praise for this year’s women’s squad.

“Last year was the best women’s team we ever had in my 20 years of coaching,” Furey said. “This women’s team is close to that team, so I think it’s a really good women’s team.”

Captain Cristina Ashbaugh credits this success to a change in culture that the freshmen have been critical in helping develop.

“This year, we’ve gotten a few freshmen who take this seriously, and that helps when the freshmen set the tone, too, for the rest of the team,” Ashbaugh said. “We want to set a good example for them, but we don’t want to make them feel very intimidated. We are also doing more serious workouts, which is awesome and going to be helpful.”