Newton, Patriots lose on final play in another classic vs. Seahawks 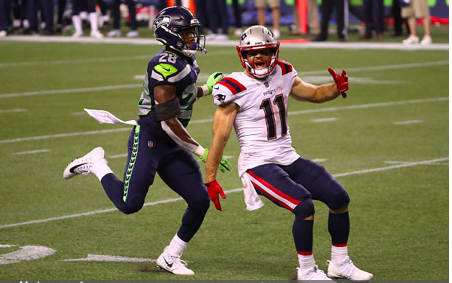 Cam Newton just nearly capped off his own version of a memorable New England Patriots comeback win much similar to how a certain former Patriots quarterback would have done it. But a goal-line stand in the closing seconds by the Seattle Seahawks on Newton thwarted the Patriots as they fell to Seattle 35-30 Sunday night in another heavyweight battle between the two franchises.

“I could have bounced it (outside),” Newton said when discussing the final play postgame. “I’ve just got to be better.”

Just an FYI, Newton had a really good game, like really good. The Patriots quarterback went 30 of 44 for 397 passing yards, 1 passing touchdown, ran for 47 yards and 2 rushing touchdowns, had the lone blemish of one interception, but almost completed the come from behind victory after being down as many as 12 points. Of the Patriots 464 total offensive yards, Newton contributed 444 yards, or almost 96% of the offense.

Talking more about the offense, Patriots star receiver and Mr. “I love getting hit” Julian Edelman had a solid game, no matter how many times he slowly recovered from tackle after tackle. Edelman snagged 8 catches for 179 yards and had some “How the heck he catch that?” grabs with one incredible 49-yard lunging catch against top Seahawk defender Jamal Adams in the third quarter.

Along with Edelman, young Patriots wideout N’Keal Harry also had a great game. Catching 8 balls for 72 yards. Harry made some big boy catches—one came during a bang-bang play early on in the game and another a contested ball to get New England to Seattle’s one-yard line in the last drive of the game.

One last point regarding New England’s offense, they were without star running-back James White, who was inactive after hearing his parents were in a car crash Sunday in Florida that saw White’s father killed in the crash and his mother in critical condition. When Patriots safety Devin McCourty returned an interception for a touchdown on the opening drive of the game, McCourty ran up to the cameras and said, “28! We love you bro!” referencing White’s number 28 on the team.

Moving forward with talking about McCourty and New England’s defensive performance, they had their hands full with Seattle superstar quarterback Russell Wilson. Wilson threw 21 of 28 for 288 yards, 5 touchdown passes, the lone pick-six by McCourty, and added 39 rushing yards to the Seahawks offense. How Wilson has never gotten a single MVP vote during his stellar NFL career so far boggles the mind, especially after last night’s performance.

Seattle’s receivers played exceptionally well with speedy wideout Tyler Lockett—who had 8 catches for 67 yards and a touchdown—and  the walking muscle mass, aka D.K. Metcalf, who secured 4 catches for 92 yards, including one jaw-dropping 54-yard touchdown catch over Patriots star cornerback and reigning NFL Defensive Player of the year Stephon Gilmore.

It always stings when the Patriots lose a close game where they were one yard away from starting 2-0. Instead, they stand at 1-1 going into next week’s matchup vs the Las Vegas Raiders Sunday afternoon in Foxboro.

Give Seattle a lot of credit, they’re a well-coached and overall very good football team led by a should-be MVP in Wilson. They have always battled New England to the final whistle with the last four meetings between the two all coming down to one-score games. Hats off to them.

There are positives to build off of for the Patriots however. New England reminded the NFL that they still wield a tough football team, even despite the quarterback change during the offseason. Cam Newton has been borderline excellent in his first two games as a Patriot, adding different elements to the offense Patriots fans haven’t seen in the last 20 years with running out of the pocket to extend plays, option formations, and more designed quarterback runs. You just didn’t really see that type of offense with the last Patriots starting quarterback. And to be honest, it’s refreshing.

If New England can complement the exciting offense with getting back to their usual sound defensive play, the Patriots are going to be a problem for the league folks, it’s simple as that. On to Las Vegas.