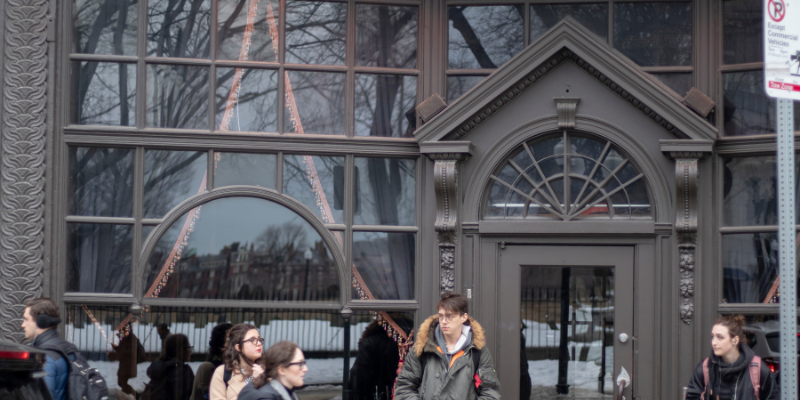 The college purchased the Walker Building adn 116 Boylston St. in 1998. Whisky Saigon moved into the space in 2013. Photo by William Bloxham / Beacon Correspondent

Whisky Saigon, a nightclub that neighbors the Emerson campus, will vacate 116 Boylston St. by June 30. The college accepted an offer earlier this year to end the nightclub’s lease before it expires in 2022, according to a college official.

The college will repossess the Emerson-owned building on July 1, President M. Lee Pelton said in an interview. The space will be used to expand the Dining Center in anticipation of Little Building opening in August 2019 and an influx of 800 students living on campus.

Pelton declined to provide specifications for the price the college paid to Whisky Saigon to end their lease agreement early. He said the college and the nightclub came to an agreement sometime between late-January and mid-February.

Whisky Saigon management did not immediately respond to a request for comment before the publication of this article.

The primarily freshman residence hall will add 1,030 beds to campus and increase pressure on dining services.

“[This] is, obviously, closer to our core mission than being a landlord for a bar,” Shapiro said in a phone interview.

The contract between Whisky Saigon and the college provided the owners of the nightclub the right to extend their lease for another 10 years. Prior to the early termination agreement, the college could not legally deny the nightclub a lease renewal until 2032.

Pelton said the college declined a previous offer from Whisky Saigon to end the lease agreement.

“It was just extraordinarily and ridiculously high,” he said. “I thought if we just wait they’re going to want to leave at some point. So, they came back to us and made an offer to get out of their lease at a price that we thought was reasonable.”

The college purchased the building at the same time they did the Walker Building in 1998. The college first leased the space to Whisky Saigon in 2013 after the owner of another former nightclub transferred ownership

March 18 Update: The article has been updated to include “Whisky Saigon management did not immediately respond to a request for comment before the publication of this article.”