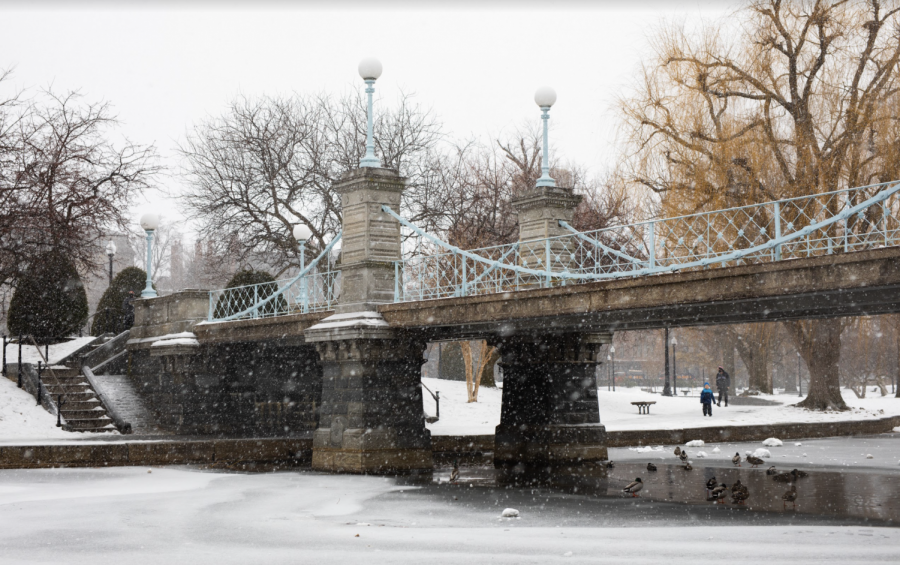 A nor’easter pummeling Massachusetts is estimated to engulf some areas of the state in up to 18 inches of snow, accompanied by upward of 45 miles per hour winds and coastal flooding.

Snow began to envelop the city Monday afternoon and is projected to continue into Tuesday. A winter storm warning remains in effect in Boston until Tuesday at 5 a.m., according to the National Weather Service.

Emerson canceled the first day of in-person classes in preparation for the storm, moving the classes to online. The cancelation of in-person classes followed Boston Mayor Marty Walsh urging city residents to stay off the roads until Tuesday. The college announced the closure of all campus buildings and the Tufts Medical Center testing center in emails sent out Sunday evening and Monday morning. 172 Tremont, residence halls and the dining center, remained open.

Jack Scott, a first-year visual and media arts major, said he was shocked to see the college cancel classes given the mild fall of flurries hitting the deserted sidewalks at the intersection of Tremont and Boylston streets at one o’clock. Since then, the snow has accumulated significantly.

“From what I can see right now, it seems pretty lame,” Scott said. “I was a little surprised classes were canceled, but I’m not complaining because we got to wake up late. I didn’t leave my dorm until noon, so I guess I didn’t see the brunt of it.”

Sophomore VMA major Jacob Wasserman said he is excited to get the chance to relax inside for another day.

“I’m pretty happy about it,” Wasserman said. “Nothing’s really changed so far. It’s just Zoom classes for me. I’m just gonna be chilling—gives me more opportunity to catch up on work and on Netflix.”