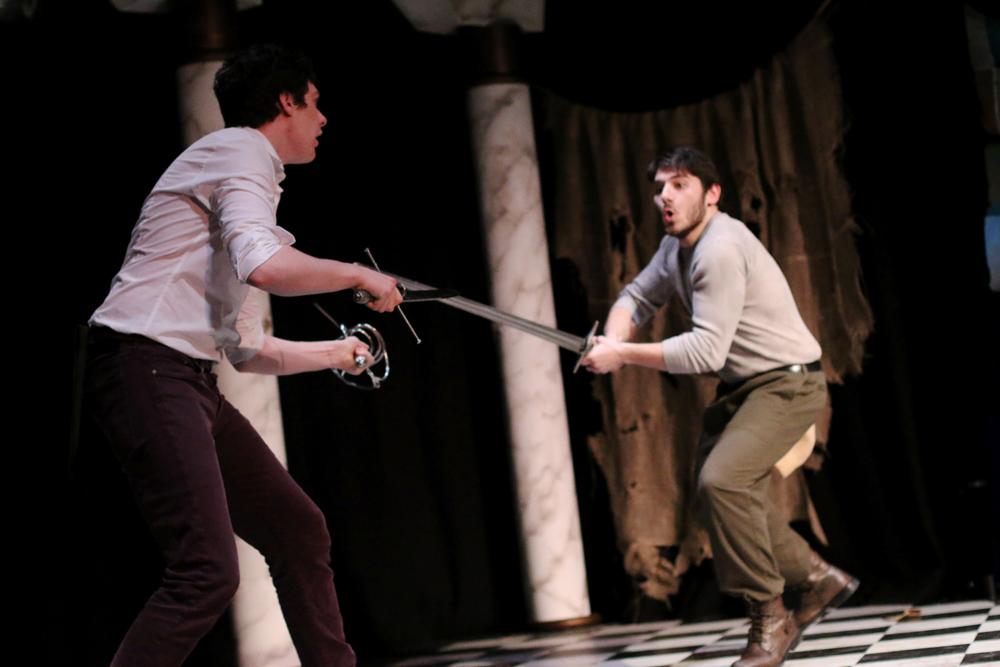 Against the backdrop of a black curtain and atop a black and white tiled floor, motionless bodies lay with fake blood across their faces, slain from an intricately choreographed battle. As Kanye West’s “Power” echoed through the theater and swords clashed from either side of the stage, audiences were exposed to the gritty, shocking climax of their first show of the spring semester.

Emerson Shakespeare Society presented the Bard’s Cymbeline on both Friday, Feb. 14 and Saturday, Feb. 15 in the Cabaret. The play illustrates the dynamics of power and love amidst the turmoil of the war between the Celtics and the Romans, at the time of the Roman Empire. With a complex plot and multi-layered characters, the show features elements like a cross-dressing heroine, dream sequences, an a cappella number, and an epic fight scene.

The director, Devin Fletcher, a sophomore acting and directing major, said she chose to stage the piece primarily due to its lack of fame in contrast to Shakespeare’s more highly revered works.

“When you go to see Romeo and Juliet, you know how it ends,” said Fletcher. “Cymbeline is less familiar and, looking at the rest of Shakespeare’s plays, it’s sort of lost in the canon.”

Kai Tshikoshi, a junior theater studies and acting major who played Cymbeline, explained that Shakespeare Society focuses on shows that are not often performed; staging this show was a way of performing a classic and still bringing something fresh to Emerson.

“I like to consider myself a Shakespeare aficionado but even I hadn’t heard of this,” said Tshikoshi. “When you perform a classic, people know the story already, and the real challenge is trying to create stylistic differences. Here, we had the exciting challenge of telling the story for the first time to an audience.”

Though Shakespeare’s works generally fall into the categories of romance, comedy, or tragedy, Shakespeare never outwardly defined Cymbeline’s genre; because of this, Fletcher said it is often filed under different categories and is relevant to audiences with varying literary interests. The play is typically performed as a comedy, but Fletcher said she chose instead to focus on the darker elements.

“There’s a romantic subplot, but also tragedy and loss,” said Tshikoshi. “It’s a hair’s breadth away from being a tragedy, but in the end the lovers are reunited and it’s essentially a romance again. A dark romance.”

The play addresses themes of revenge, reconciliation, betrayal, and redemption. Fletcher explained that much of the content in Cymbeline is relatable to the war, destruction, and terrorism prevalent in today’s global society.

“People have a tendency to look at Shakespeare and think, ‘Oh, this’ll be boring,’ but Cymbeline speaks to a lot of fear and insecurities that are still relevant today,” she said.

In an attempt to modernize the play’s cast and further emphasize the show’s relevance, Fletcher made the decision to gender-flip several roles in the play. All women cast in the play, save for the Queen, Helen, and Princess Imogen, were originally written as men. Fletcher said the changes not only reflect modern gender dynamics but also embrace the idea of the Celtic woman. A dramaturgical note was added into the show’s program explaining the vitality of Celtic women warriors during the war against the Romans.

“Our characters are not stereotypes by any means, and the princess is not a stereotypical princess,” said freshman performing arts major Abbey May, who played Princess Imogen. “A normal princess falls in love with the husband and lives happily ever after. Imogen shows courage deeper than what you see in fairytales.”

Imogen’s character cross-dresses and adopts the name “Fidele” partway through the show, entering a town in Wales to find employment, even though she knows of a murder plot against her in the same town. Rather than seek the help of a male’s protection or magic, as in traditional fairy tales, Imogen braves the journey alone, showing boldness and bravery in her character.

Every member of the cast handles a sword at some point, emphasizing the portrayal of women warriors as equal to men.

“For any audience looking for accessibility, Shakespeare is a daunting prospect,” said sophomore theater studies major Blake Vesey, cast as Belarius. “He has this amazing way of writing details of humanity, though. The play shows an expression of man or an expression of a woman in strong circumstances, and it makes it easy for the audience to connect with the characters.”

Belarius’ character has caused King Cymbeline grief but has also been wronged by him, leading to a persistent internal conflict throughout the course of the play. Twenty years prior to where the show begins, he was banished from the kingdom for being a traitor against the Romans and, out of spite, stole the king’s children. His struggle between forgiveness and confession explores the idea of choosing humility over pride.

The play culminates in a battle scene, the most detail-oriented and time-consuming scene of the play, said Fletcher. Each character’s internal conflict coupled with the pre-existing tensions between characters took on a tangible form through choreographed violence in the second act.

“A lot of times, in the media, we see violence without fully seeing the consequences and how they affect those involved,” said Fletcher. In the director’s note, she added, “Cymbeline shows that we live in a destructive world, and so we created it truly. Within, we found its beauty.”

Fletcher said the process of creating the fight scene involved making the fights, teaching them to the cast, and also integrating the storyline that added the emotional drive behind the physical actions.

“The characters are most deeply in this world in this moment,” said Fletcher. “When I watch them perform it, they’re not actors playing a role anymore. It’s like you’ve been transported. It’s chills.”

Fletcher said that, overall, the action of the play boils down to characters facing classic choices to make including war, murder, love, and hate. The thematic content helped relate the characters to the show and, in turn, the audience to the characters.

“When you fight with someone, there’s this expectation that you must hate them,” she said. “In this show, they choose not to do that. These characters choose to sacrifice out of love, and what that leads to is a complete and total reconciliation. That is powerful.”