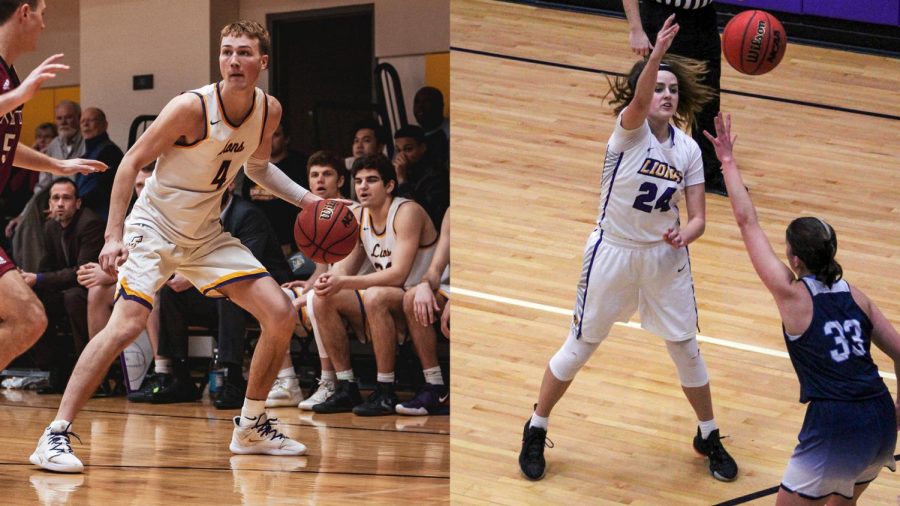 Although the men’s and women’s basketball teams both closed out their seasons with losses in the quarterfinals of the NEWMAC playoffs, two key players received postseason recognition from the conference.

O’Connor finished his senior season with 433 points on 44 percent shooting and 790 minutes played, tying him for seventh in the New England Women’s and Men’s Athletic Conference in scoring. He totaled 1,308 points in 76 games played over four years as a Lion.

“Jack is a guy that has had to lead by example,” men’s basketball head coach Bill Curley said in an interview with The Beacon. “We asked him to do a lot, and he handled the ball and made passes. He shot the ball, he was the closer. It’s hard when you’re the main guy. Since Geoff [Gray ‘19] was gone, most of the pressure fell on Jack because of his skill set. It wasn’t an easy task, and he was still able to score and get his teammates involved.”

O’Connor said he knew someone needed to fill Gray’s presence on the court but never let the pressure get to him, which he proved with his significant increase in assists given this season. In his senior season alone, O’Connor tallied 93 assists—four more than he recorded in the previous three seasons combined.

“When I play, I play hard,” O’Connor said in an interview with The Beacon. “I like to share the ball and play together with my teammates. We were at our best when we did that. I definitely worked on my skills, but the entire team was also working on skills.”

Boyle tallied a team-high 11.5 points per game and started in 77 of the team’s 78 games in her freshman, sophomore, and junior seasons.

Women’s basketball head coach Bill Gould said Boyle’s presence on the court this season stemmed from a conversation the two had after the previous season when Boyle’s sister, Charlie Boyle ‘19, graduated.

“I give a ton of credit to Sam for the kind of year she had,” Gould said in an interview with The Beacon. “We talked to her at the end of last season about how much we were going to need her to be a fantastic player, which she already was, but to take it to another level by accepting her role as a go-to [player].”

Gould said Boyle played with a relaxed yet confident play style that encouraged her teammates to follow in her footsteps, which he said he hopes will carry into her senior season.

“I don’t expect her to be Michael Jordan,” Gould said. “She’s a unique talent, and her versatility is great. I think that’s the next stage for her, is to play with that calmness and confidence. That doesn’t mean perfection, [she] doesn’t have to be perfect, but [she] has to play like [she] thinks [she’s] perfect.”

Boyle did not respond to multiple requests for comment.