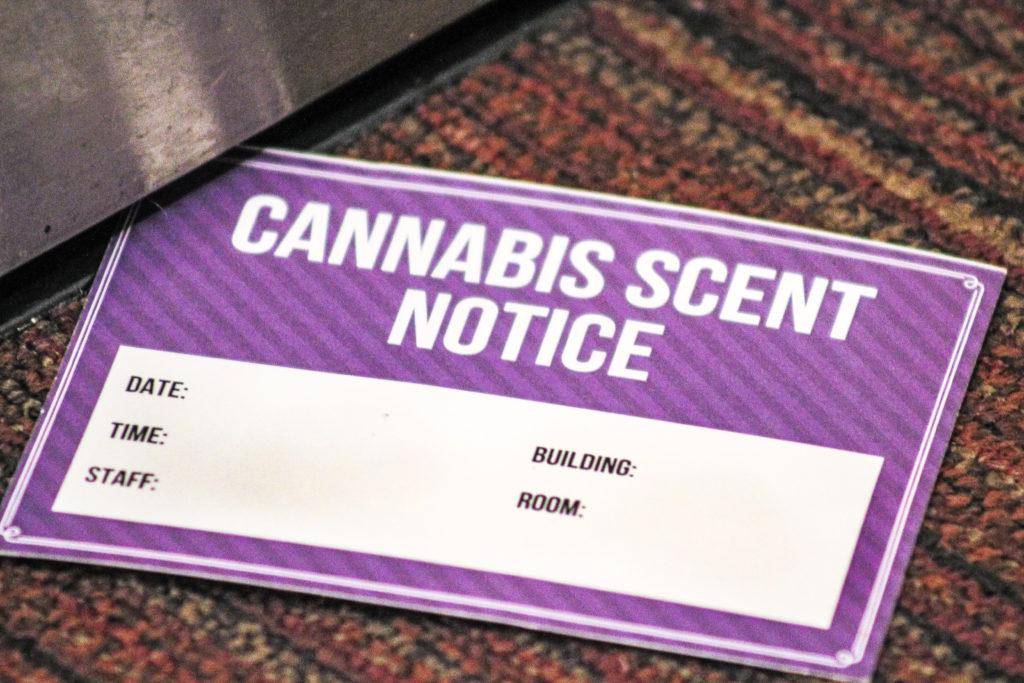 The Office of Community Standards and Student Conduct is reviewing its drug and alcohol policy regarding medical cannabis on campus as part of a larger campus-wide policy review for the JED Program and will continue discussions throughout the summer, according to a college official.

Melissa Woolsey, assistant director of community standards and student conduct, said in an interview that the policy review is a part of Emerson’s participation in the JED Campus program, which guides schools through processes that address student’s mental health and overall well-being. A committee of several students, staff, and faculty members from across departments are re-examining the state and federal laws regarding cannabis and potential approaches when dealing with medical marijuana cards, Woolsey said.

“As the state is ramping up its dispensaries, we are continuing to educate ourselves on what any implications might be on the college and our students, and part of that continued review will include medical cannabis,” Woolsey said.

Emerson would lose its federal funding if the college changed its policies to abide by the Massachusetts state law that legalizes cannabis.

The college follows federal policy which dictates that medical cannabis is not to be permitted on campus or used within residence halls or any campus facility—the same protocol the college uses for recreational cannabis and other controlled substances, Associate Dean for Campus Life Erik Muurisepp said in an interview.

Woolsey said the college should have more concrete information in fall 2019 regarding the committee’s discussion on medical cannabis on campus. She said she doubts changes will come from the review besides altering policy language, such as replacing “cannabis” with “marijuana.”

“The way that the federal government talks about and requires us to respond to cannabis-related issues is really strict,” Woolsey said. “We’re just trying to see if anybody has found any wiggle room. Not saying that means we would take it, but as of right now there’s really only one way we can respond.

Freshman Erika Bloom said obtaining a medical cannabis card for her Crohn’s disease diagnosis in Boston during her first semester at Emerson took several months. A medical card is a state-issued identification card that allows an individual to obtain, posses, or cultivate cannabis for medical use. After the process concluded, Bloom said she had a dispute with the college regarding the possession of legal cannabis on campus.

“Legally, I am allowed to have possession of it, even if federally I’m not, which is where it becomes tricky,” Bloom said in an interview.

Muurisepp said if students with a medical card felt they were unable to live on campus because of the college’s cannabis policies, the Office of Housing and Residence Life would work with them on a case-by-case basis to find a housing situation that supports their well-being, which could include getting a housing exemption.

“It’s easy to say, ‘You can’t use it on campus,’ but then you also can’t store it on campus,” Muurisepp said. “So, we don’t have a sense of where folks would go and do that, and I think that’s a part of that unfortunate grey area.”

Muurisepp said that, to his knowledge, no student has reached out for such housing accommodations during his time as associate dean. The college does not keep track of students with medical cards.

Bloom said officers from the Emerson College Police Department came to her suite after her roommate reported her for possession of cannabis, and the officer confiscated everything related to cannabis, such as her rolling papers, THC cartridges, and cannabis. Bloom said the officer took pictures of her medical card and wrote a report to the college that Bloom uses the drug medicinally and she was simply storing it in her dorm.

Bloom said the residence director that handled her case gave her a warning and explained that other misconducts could lead to the college fining Bloom or prohibiting her from living on campus. In the warning, the college informed Bloom about the use of cannabis and the school’s federal drug policy, Bloom said.

“The school cared more about letting me know the effects of [drug use] and what the implications are for smoking,” she said.

Bloom said she does not use other medications daily because they don’t work for her, and she feels frustrated that she cannot smoke as easily as she does at home in Los Angeles, California.

“If I have a medical reason, why can’t [the college] make some sort of accommodation for that?” Bloom said.

Emerson joined the JED Campus program in 2016 to focus on mental health, substance abuse, and suicide prevention among college students.

“We are looking for students to participate in the JED committee, as well as staff and faculty,” Woolsey said. “If anybody was ever interested in being a part of this committee they absolutely can write to us, and we’re always looking for people to come in and give us their viewpoint.”

The committee looks at the school’s alcohol and drug policies and typically meets every other week, while other Emerson JED committees might meet once a month or every other month depending on where they are in discussions and plans related to their respective topics.

Muurisepp said he supports medical cannabis use, and he wants to find a middle ground for card holders so students can care for themselves while adhering to the college’s policies and regulations.

“You know, I would hate to see students live off campus for [cannabis], but obviously if that’s a need, we’ll work with them so that the student’s best interest is in mind,” Muurisepp said.