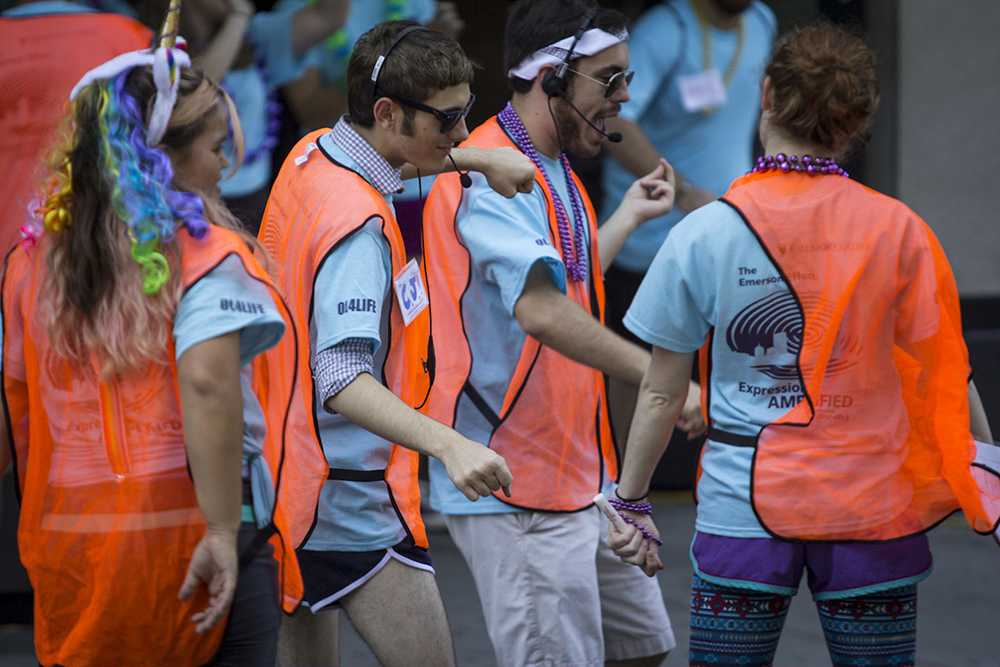 All students’ first experience with Emerson College’s particular flair begins at move-in: The image of orientation leaders in rainbow tutus, sparkly spanks, and bizarre hats burns into the brains of Emerson students taking their first steps onto campus for as long as anyone still here can remember.

“No one does move-in quite like Emerson College… It’s quite the production and I love the reaction from new students. It’s electric,” said Jason Meier, director of student activities. And this year was certainly no exception — social media blew up with pictures of and comments about OLs’ dancing, sporting bow ties, and wearing banana suits.

Although OLs are traditionally some of the most spirited and unique members of the Emerson community because of the responsibilities the job entails, the goal of orientation is to make everyone feel at home, no matter how active they are in the social and extracurricular worlds, according to Emily Enters, chair of undergraduate orientation core staff.

“I’ve heard a lot of feedback in the past about how our orientation program is overwhelming or targeted towards more outgoing students, but I don’t think that’s true,” said Enters. “The OLs we had on staff this year were a great reminder that you don’t have to be ‘crazy’ to fit in at Emerson.”

With this awareness in mind, a new training program has been implemented for OLs.

“This year, the Student Life team included the StrengthsQuest program into its orientation leader training,” Meier said. “Our OLs are able to identify what they’re the best at and how to use it when working with our new students.”

The success of StrengthQuest among orientation leaders has led to a new class that will be open and free for all students next spring, said Meier. It will focus on the leadership training techniques of StrengthQuest, which Meier described as “a multi-faceted training program that helps students discover their inherent strengths and how to use them in day-to-day activities.”

OLs utilized the program to learn self-awareness and how to use that to unite the school, Enters said.

“It’s about embracing the person you are and want to be,” said Enters. “Not everyone is going to love or even like their Orientation week, but if every incoming student makes at least one meaningful connection during the week, we succeed.”

Even returning OLs were able to embrace the changes in the program.

“I love orientation training,” said Jen Tiedemann, a second-year OL and junior performing arts major. “There’s a strong focus on team-building, and I love that. We all come to realize what our strengths are and how we benefit the orientation program.”

OLs returned to Boston early to go through a four-day training program before freshmen arrived for move-in on August 26.

“The process reminded me of camp.  It could even be called OL Training Camp,”  said Noelle St. Louis, an orientation leader and junior marketing communication major. “It was a lot of fun but also exhausting,”

But the exhaustion doesn’t end with training for OLs. As St. Louis described it, waking up before dawn and attending events all day was the norm for OLs during orientation week itself.

“Although it is hectic, it is a good hectic,”  said Caroline Lacy, an orientation leader and junior performing arts major. “You are having fun doing all of these things because you get to see the smiles on the new students’ faces and how excited they are to be in this new place, but also help the ones that are a little overwhelmed become more acclimated to the community,”

Katy Rushlau, lifestyle editor and orientation leader, did not edit this article.