One City, one story: a ‘common text work’ 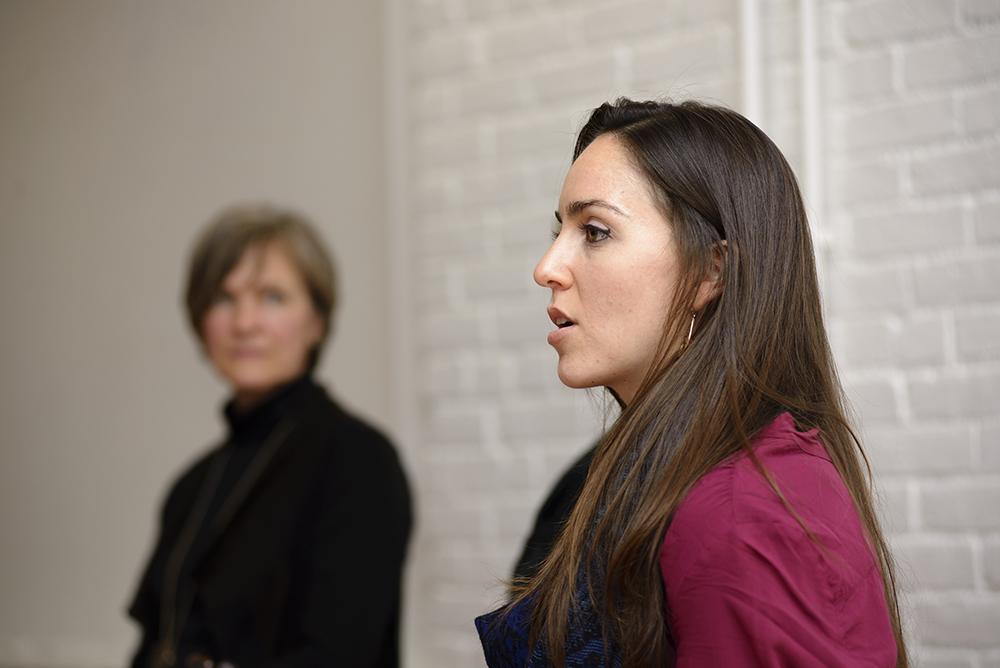 In the first scene of Jennifer Haigh’s short story “Sublimation,” a mother and son sit down to watch Jeopardy!. As he sips on his drink, the son leaves lipstick on the rim of his glass. His mother says nothing.

On Oct. 23, a panel of staff and faculty members from Emerson’s writing, literature, and publishing department gathered in the Iwasaki Library to discuss the subtle complexities of gender nonconformity portrayed in Haigh’s story. The discussion was part of a citywide event titled One City One Story, an initiative launched in 2010 by the Boston Book Festival to promote and strengthen the city’s literary culture.

The organization annually selects a short story from a prominent Boston writer, then prints and distributes roughly 300,000 copies free of charge, across the city.

“Sublimation” was originally published in the Spring 2014 edition of Ploughshares. Ladette Randolph, the magazine’s editor-in-chief, said that by distributing stories through various outlets like libraries and coffee shops, the program establishes a strong sense of community among those involved.

“[One City One Story] has been a really great program to bring libraries into the Boston Book Festival and to bring people to a common text work,” Randolph said in an interview with the Beacon. “I think it gives a sense to people that they belong because they read this story.”

Part of the program’s mission is to engage readers in group discussions, creating a platform to share different perspectives and interpretations of the texts. Works are released in five different languages and electronically to maximize accessibility.

Randolph, who sits on the selection committee for One City One Story and participated in the panel discussion, said “Sublimation” is particularly interesting because it deals with the complications of gender expression.

“We are all realizing that gender expression is on a spectrum,” said Randolph. “There is sizeable population of people for whom it is not an easy thing to negotiate sometimes. So we are all becoming sensitive and more aware of the expression of gender.”

Though the story deals with specific issues regarding gender and sexuality, Haigh said that some aspects of the piece—like intergenerational relationships—are universally recognized.

“Everyone has parents,” said Haigh in an interview with the Beacon. “It’s a story about how essential it is to change and adapt and I think it’s a story everybody can relate to.”

Randolph added that students can find value in Haigh’s work because it illustrates notable contemporary themes.

“[“Sublimation”] addresses some issues about transgender people in a way that I think it is interesting not by making a too big deal out of it,” said Randolph.

In the text, Haigh alludes to the blurred line between the characters’ gender identification without explicitly saying so. In the opening scene of the mother, Dolly, and the son, Bruce, watching Jeopardy!, she writes: “[Bruce’s] new wig is an improvement over his old one, closer to his natural color. [Dolly] never had the heart to tell him he was unconvincing as a blonde.” She weaves in understated details of the characters’ identities to create a complex, layered piece.

Christina Daly, the director of retention and student success at Emerson and a panelist at the event, said that she read the short story several times.

“It’s not easy to read the story without having questions about these people and their relationships to each other,” said Daly in an interview with the Beacon. “I think there is a lot about identity, gender roles, and how people do or do not present their inner identities to the world.”

Daly added that the story places these questions in the context of family dynamics, introducing universal complications like acceptance and communication.

Lisa Haines, a senior writer-in-residence at Emerson, said that she has recommended the story to her students for its balancing of pathos and humor.

“It’s truly wonderful. We are a community that embraces differences,” said Haines in an interview with the Beacon. “Our community in particular can relate to this story.”