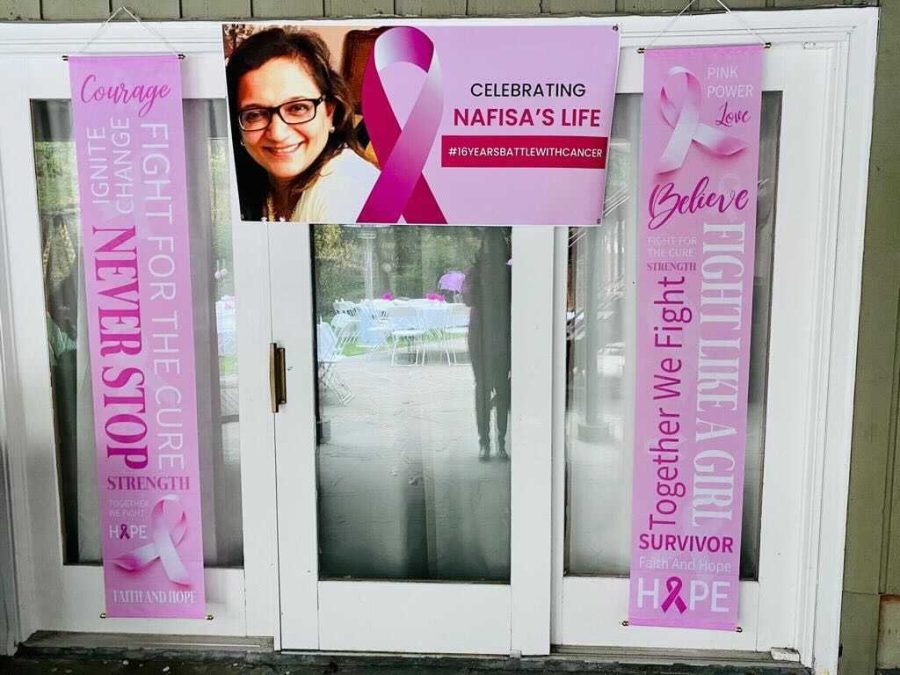 On Oct. 17, I lost my aunt, Nafisa, to breast cancer. After 16 years of fighting, she was forced to give up because her body gave in, even if her conscience wasn’t ready yet. Losing her made me realize that we need more than a month to truly honor those who have lost their battles with breast cancer.

As October comes to end, so does Breast Cancer Awareness Month, a month that honors the lives lost and the lives still battling against a disease that has a mind of its own.

According to the World Health Organization, breast cancer is the most common cancer in the world as 2.3 million women were diagnosed with it in 2020 alone. In the United States, there are more than 3.8 million breast cancer survivors, including those still fighting and those who won the fight. There will be an estimated 280,000 new cases of invasive breast cancer in 2021.

It’s important to remember these numbers as more than shocking statistics. These numbers represent human beings persevering through the worst of odds and these human beings must be commemorated everyday, not just from Oct. 1 to Oct. 31.

Breast cancer tired my aunt out, and despite the harsh procedures and indescribable pain she endured, Nafisa never let it show. Instead, she planned an extravagant wedding for her son, traveled the world with her husband, laughed with her friends, and loved everyone around her more than anyone else. My aunt was so happy that even the people closest to her had no clue that her body was invaded by a ruthless disease.

This is a reality for many breast cancer patients. The disease makes them fighters, so the world perceives them as just that. Very few look deeper as to understand why they became fighters in the first place. And it’s because of this, because of their resilience, breast cancer patients deserve more attention. They go through hell for years, and society gives them one month out of 12?

Those diagnosed with breast cancer are given five main treatment options: surgery, chemotherapy, hormonal therapy, biological therapy, and radiation therapy. During surgery, doctors can either perform a lumpectomy—cutting out cancer tissues along with some normal tissue—or a mastectomy—removing the entire breast. Chemotherapy uses special medications, administered intravenously and/or as pills, to shrink or kill cancer cells.

Many side effects accompany this treatment, like weakened immune systems, easy bleeding, hair loss, nausea, rashes, mouth sores, and so much more. Hormonal therapy prohibits cancer cells from growing by refusing them hormones. Biological therapy works with one’s immune system to fight the cancer cells, and also control side effects from other treatments. Radiation therapy uses high-energy rays to kill the cancer cells, and you can only imagine the harm that comes from such an intense treatment.

My aunt was first diagnosed with breast cancer in 2005, and it was stage four right off the bat. She proved to be indestructible from the beginning, until she just couldn’t anymore. After beating that monster the first time, it wasn’t until 2015 that the cancer came back stronger than ever. She endured treatment after treatment, side effect after side effect to stay alive for her parents, her husband, her sons, her brothers, her family.

Cancer is embedded in the unknown. It’s a relentless bully of the human body, and breast cancer especially strips women of their persona by attacking a cherished part of the female body. Breasts represent one’s sexuality and give people body types they grow to love and nurture.

Not only are they a symbol of womanhood, but they also play a role in being a mother through breastfeeding. Breasts are a woman’s protection for her heart—they allow women to embrace being female.

Those who have never encountered cancer, whether that’s through a loved one or personally, will never understand the pain of watching a body deteriorate against a force that continues to warn us to not reckon with it. It took losing a family member to a bunch of mean cells to realize the importance of commemorating breast cancer fighters for more than 31 days.

To everyone, wearing pink for the warriors around the world does not have to be limited to October. Donating to breast cancer foundations for research, helping less developed countries, awareness and more can be a year-round gesture.

Breast cancer is not just a nasty monster, but also a powerful one, and those who fight it deserve all the recognition and support in the world, all the time.