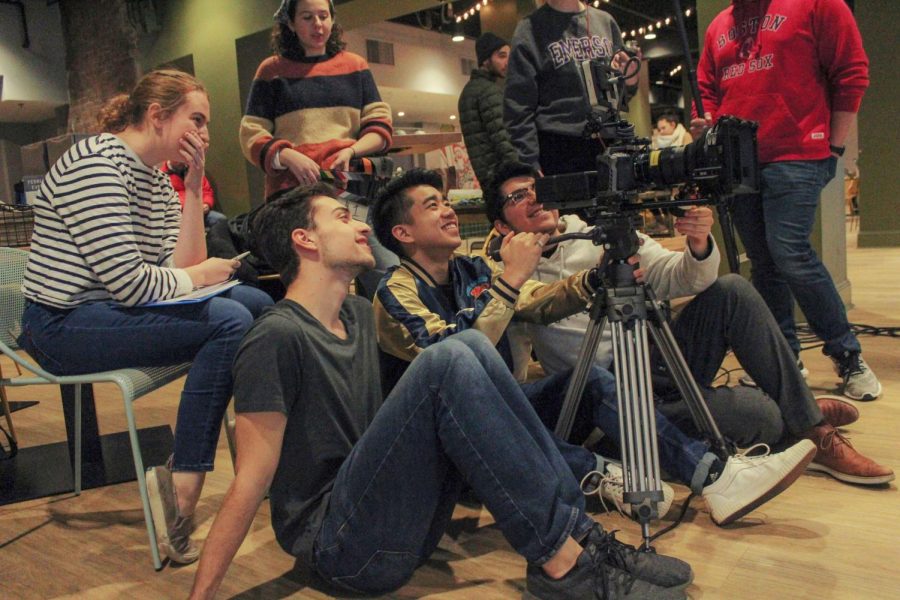 VMA Department Chair Brooke Knight said he and the associate chairs identified 92 sections of production courses that would be significantly impacted by the transition to online.

Sophomore visual media arts major Lauren Miller was preparing to film a group final project when the college announced it would be switching to remote learning in light of the progressing COVID-19 pandemic—she worried about what this would mean for her and her classmates’ work.

“Obviously if you’re at home, you don’t have access to as much equipment as you do [at Emerson],” Miller said in a phone interview from her home in California. “It was a kind of upsetting because I was supposed to direct one of those final projects. I had written the script, I was all set to direct it, and it all just very quickly wasn’t possible to do anymore.”

Chair of the VMA Department Brooke Knight said the transition to online learning, announced on March 10, posed an immediate concern for students, especially for those in production courses that require specialized equipment and spaces that are easily accessible on campus. The pandemic, which has upended nearly every facet of life, continues to impose challenges on students in production-based majors such as VMA.

Knight said he and the associate chairs identified 92 sections of production courses that would be significantly impacted and difficult to translate to online learning.

“Faculty are being inventive and figuring out ways to use materials that they do have to still be able to get across the main points of the classes [and] to…meet their learning goals and their learning objectives given the situation,” Knight said in a phone interview with The Beacon.

Throughout the week of March 16, Knight said he reached out to every VMA professor individually to provide support during the transition to remote learning. He then held multiple Zoom meetings that week for professors to collaborate on ideas and discuss issues they anticipated or were facing regarding online classes.

He said the Instructional Technology Group, Information Technology, and Media Technologies and Production departments also provided guidance and instructions for the faculty on how to use Zoom.

Knight sent an email to VMA students on March 17, informing them that he had asked faculty to reconstruct their assignments in a way that doesn’t require the use of specialized equipment.

“I hope you look at these limitations as opportunities to allow your creativity [to] flourish,” Knight wrote in the email. “I have been watching the faculty do it through the radical reconfigurations of their classes.”

The department anticipated more difficulty in transitioning classes such as Editing for Film and Video to online, so it began implementing online tools and software programs including Avid Media Composer—which edits film and video—Knight said.

For the directing classes, he said the department got licenses for students to use a software provider that would allow them to do previsualization, a technique that can visually map out scenes and sets.

“That way they can prepare shoots … and do all that kind of work beforehand virtually rather than doing it [in-person],” Knight said.

Miller, the VMA student, said her professor for Introduction to Narrative Drama altered the requirements for the final project. Rather than requiring students to do a group film, the professor gave them the option to either participate in a group project or propose an individual project, such as writing a script or creating a production book. She said that if students choose to do a film, they can record on their phones.

“Some [students] are still doing a group collaborative project in which everyone in the group picks a time of the day, more or less, to film some B-roll type of footage, and we all share our footage and then we write a script [about] how we would assemble the footage, and then we’re going to edit it,” Miller said. “It’s been a lot of us composing ideas, and [the professor] proposing ideas, and trying to find the middle ground of what’s possible for everyone versus what still fits the class.”

“That particular copyright class is a class that I always just said ‘Oh I’ll never do that online, that won’t work,’ and now we’re doing it,” Marshall said in a phone interview. “It’s not totally complicated, but it’s more [complicated] than doing it in person.”

He said the class requires students to present a case study related to copyright law, which is followed by a class discussion. For online classes, Marshall said he is having his students record and upload their presentations and hold the discussions on Canvas.

Miller said that she appreciates how accommodating and communicative her professor and the college have been throughout the transition to online learning. Her biggest concern is how production courses will proceed if remote learning continues through the fall. Miller said she’s grateful to have had some production experience from the first half of this semester at the very least.

Knight said if online courses continue through the fall, the VMA Department will ensure that students can still progress with their degrees.

The department is considering shifting the course offerings so that students can take more required classes that are more adaptable online, such as writing and history courses. He added that once in-person classes resume, the department can offer more production courses so students can still gain hands-on experience.

Knight said he and the rest of the VMA Department are continuing to support students and faculty individually throughout the semester. They are proud of how the Emerson community has adapted to the transition to online courses.

“I just want to give a huge amount of gratitude to the students for their flexibility and adaptability and the faculty for their creativity and their perseverance in this difficult time, and to our friends at ITG and IT for giving us the tools to make it happen,” Knight said. “It’s been an incredible team effort.”