Op-ed: Don’t let social norms pressure you out of solitude 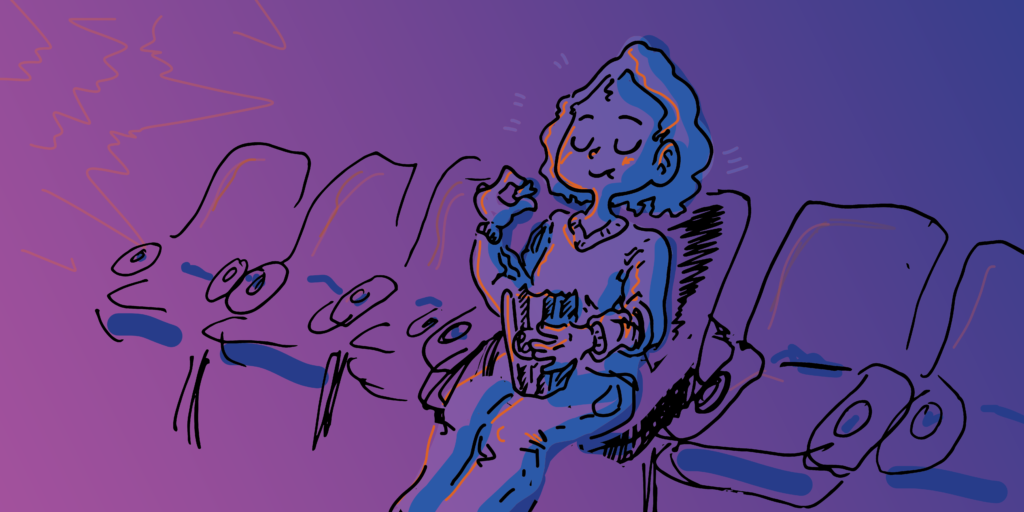 Learning to become self-reliant and even enjoying leisurely activities such as going to the movies, dining, and sitting in the park alone is not something women, or anyone, should feel self-conscious about. / Illustration by Ally Rzesa

Last semester, my intermediate magazine writing class at Emerson required me to travel to Gloucester, Massachusetts, to report on the Portuguese fishing community there. I was more than eager for this opportunity—my first chance to travel and report in a new town that was a considerable distance away from Boston. I finally felt like I was beginning to embody the image of the independent, female journalist I aspire to be.

But in the weeks leading up to my trip to Gloucester, I became apprehensive. I felt self-conscious about traveling by myself to a town I had never been to, not for safety reasons, but because I’m a woman. I questioned whether I’d feel self-conscious traveling alone, eating alone, or walking the streets of an unfamiliar town alone. To some, this may seem unreasonable, but in a world that depicts women as extroverted, social beings always with a friend or man by their sides, I sometimes feel wary of independence.

I conversed with a close friend—also a female journalist—about my apprehensions, and came to find out she was also familiar with this stigma. We discussed how our passions for writing and journalism require us to work, travel, and act on our own. Yet as young women, there is a constant pressure to always have friends or someone in our company.

Just this past weekend, I was having dinner with friends, when one discussed how excited she was to see the horror film Us, yet hasn’t seen it because she had no one to go with. She even told us how she debated seeing it by herself, only to stay home instead, out of fear of a friend or acquaintance seeing her alone at the theater.

I’m always perplexed by people’s fears of doing things by themselves, even though I’m guilty of this fear as well. But I’ve never understood why people—specifically women—experience scrutiny and self-consciousness as if being in public without friends or a man is a sort of repugnant crime.  From my personal experience, I can assume this fear derives from social norms that position women as social, caring, and emotional beings.

But there’s a double standard between men and women when it comes to independence. For men, there’s a sense of being the “lone wolf,” the distinguished rebel. If a man acts alone, no one questions it—he’s simply an independent, confident man. For women, eating alone, seeing a movie alone, or even traveling alone raises eyebrows because it’s not typical. People begin to think, “Where are her friends?” or “Why isn’t she being social? Is she okay?”

Women being alone in public places also carries another problem—predatory men. I know from personal experience that when I’m alone in public, men are more likely to approach me, to hit on me, or to flirt with me. But just because a woman is alone does not mean she is asking for company. This all ties back to the stigma and oddity about women and solitude—that if a woman is alone, she isn’t supposed to be.

Yet it’s important not to equate being alone to feeling lonely. Solitude, when done in a healthy manner, is actually beneficial for our psychological health. In his op-ed “A Quiet Cheer for Solitude,” New York Times columnist Frank Bruni describes solitude as a state where “much of the sharpest thinking is done and many of the best ideas are hatched. Yet solitude is often cast as an archaic luxury and indulgent oddity,” Bruni states. “Inferior to a spirited discussion and certainly to a leadership conference.”

This isn’t to say we should all ditch our friends and take on the world alone—we should balance the two. According to an article from Harvard Health Publishing, “dozens of studies have shown that people who have satisfying relationships with family, friends, and their community are happier, have fewer health problems, and live longer.” Thus, this equilibrium of solitude with strong, healthy relationships allows us to be happier.

Learning to become self-reliant and even enjoying leisurely activities such as going to the movies, dining, and sitting in the park alone is not something women, or anyone, should feel self-conscious about. If we constantly spend time with others, we leave no room for self-reflection and self-assessment. Without solitude and acting alone, we have no basis for discovering our own views of the world, or what we are capable of.