Op-ed: Moving past panic and perfection 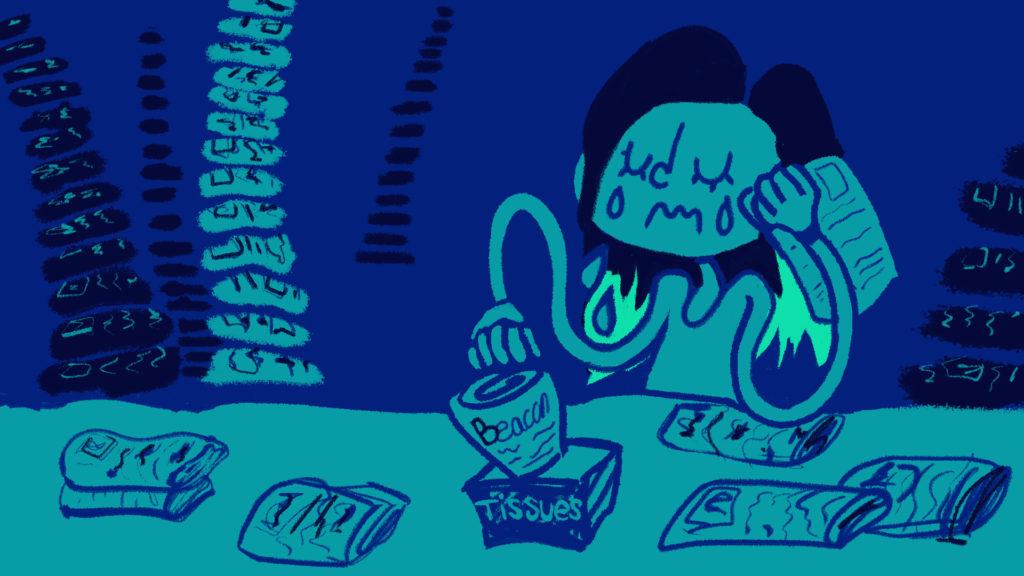 Despite my valiant attempt at perfection, my time as editor turned out more like a stream of consciousness ramble than a polished final draft. Illustration by Ally Rzesa / Beacon Staff

During my first critique as editor-in-chief of the Beacon, our advisor described my decision to feature the profane internet term “shitposting” in a headline on the front page as “regrettable.” I felt convinced that Rome would soon fall at my fingertips, crumbling hard work and dedication from countless students throughout almost three-quarters of a century to ruins.

The nerves in my stomach echoed a discomfort that’s plagued me since the first grade. Sounds associated with achieving long-term goals may include angels harmonizing or the chorus of Queen’s “We Are The Champions.” But when my predecessor nominated me for the position of editor last semester—a position I’d dreamed of fulfilling— I could hear the Jaws theme song underneath their words. As this semester approached, my confidence didn’t kick in. The ominous music got louder.

During my three years working at the Berkeley Beacon, I’ve noticed a personal and painful problem ransacking the newsroom each semester—anxiety. Our elders have dubbed millenials the “anxious generation.” Health Status reports 19 percent of millennials suffer from anxiety and depression, and rate their stress at a high 5.4 average, compared to 4.7 for baby boomers and 3.7 for the matures, born before 1946. I suspect the numbers for both college newsrooms and Emerson College would surpass these figures, which means our newsroom often transforms into a pressure cooker of doubt.

The Beacon restructured its staff this semester to take part of the burden off newsroom leaders. We hoped this would purge some anxiety from the staff, but these jobs will never be stress-free. I used to wake up sweating in panic about print production night on Thursday mornings, but stress dreams are not confined to one day a week under our new daily publishing schedule.

I would categorize most of my anxieties as irrational. On the day of the headline incident, one word turned my stress dreams about leading one of the college’s oldest organizations into a tarot card reading. Anxiety solidified my brain’s prophecy. After the first meeting, like a yellow cartoon-dog sipping coffee in a burning house, I told myself everything was fine.

Breaking news: The semester turned out better than fine. Associated Collegiate Press awarded the paper Best in Show for our website at their midwinter conference, which marks the Beacon’s premier first-place title. I dedicated countless unpaid hours to improving this organization, but my proudest accomplishment is selfish: I learned to believe in myself, that praises of my competence and talent are not in vain.

After the victory, I still endured fits of nerves and hysteria on the regular. I could say the solution to anxiety attacks and stress dreams lies in taking it easy, and giving less. But I don’t think the fierce passion I see in students from every little pocket of this community should be extinguished.

To my little chickens at the Beacon, and anyone else on campus dedicated to an organization, may your devotion remain unflinching. Get to know your anxiety, and find a way to maintain balance. Seek help when responsibilities start to pile up. Watch lighthearted TV shows in your free time to distract from any heavy subjects your work entails. (Survivor and Glee were my picks this semester. The underrated and underfunded Rescue Mediums earns honorable mention.) Go to class! Ask professors for extensions when needed, because poor academic performance will amplify pre-existing stresses. When peers show vulnerability, meet their insecurity with kind words. I will never forget the love and support I received from my staff. Thank you for watering me until I grew into a leader.

Did I have a perfect semester? Of course not—things never turn out as planned, and young reporters make mistakes often. Despite my valiant attempt at perfection, my time as editor turned out more like a stream of consciousness ramble than a polished final draft.

But imperfections will not define you. I worked hard, earned my title, and yet proceeded to place a photo of a student smoking a joint on the toilet accompanied by an obscenity on my first front page. I plan to spend next semester co-oping at the Boston Globe. My outrageous, inaugural top-of-the-fold display has not prevented others from seeing the same potential my peers saw in me when I entered the newsroom, an awkward but ambitious blue-haired freshman—so consider this messy confession my sign off as editor-in-chief. (Perhaps if someone called me out on using profanity in a headline beforehand I would have made a different call, but I stand by the defense I presented at the meeting: That shit was hilarious.)