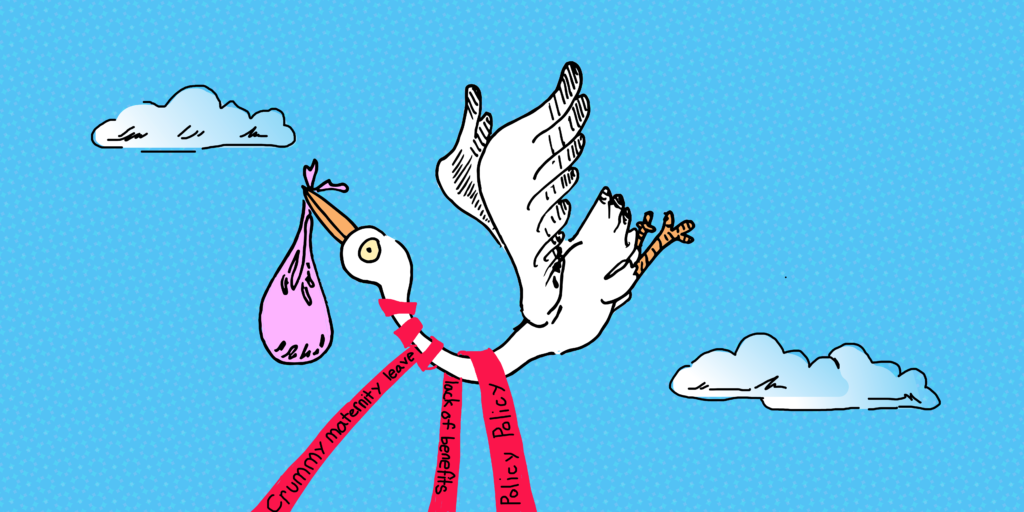 What choice are parents left with if they or their child suffers from a minor sickness that continues past the mandated 12 weeks in Emerson’s current policy? / Illustration by Ally Rzesa

Teary-eyed and six months pregnant, Emerson program manager Nicole Martignetti held her belly gently. After quietly shutting her office door, she recalled returning to work after her 12-week maternity leave following the birth of her first son in 2013.

“Babies are so small at three months. They need so much,” Marignetti said in an interview. “You’re at the train station on your way to work and all you can think about is your baby.”

As a staff member at Emerson, Marignetti received three months of unpaid leave with guaranteed job security under the Family and Medical Leave Act, a federal labor law Emerson must follow. Under the 2013 college handbook, she recovered only 40 percent of her salary by filing for short-term disability and the rest by sacrificing her accrued personal, sick, and vacation days. Her husband was at the house for only 14 days after the birth due to restricted vacation time at his workplace.

“If we want to consider ourselves the kind of institution that’s supportive of working parents, I think the question is: Is this the kind of policy that shows that significant support?” Marignetti said.

Other Emerson staff members who were angered by a number of Emerson’s policies, including maternity leave, created a chapter in April 2016 under the Service Employees International Union and established their first finalized contract in July 2018 according to the union chapter’s website. This union includes those who work in Academic Affairs, Information Technology, Communication and Marketing, and Institutional Advancement; all other staff members are not unionized.

The union’s newer collective bargaining agreement improved the maternity leave policy— most prominently, it created a parental leave policy that applies equally to men and women, heterosexual, and same-sex couples alike. Now SEIU members receive 100 percent of their regular pay for the first two weeks of leave using personal, sick, and vacation days and 60 percent of normal pay for the remaining 10 weeks they spend under short-term disability. Sacrificing remaining personal, sick, and vacation days is the only option for union staff members to collect the remaining 40 percent.

Despite the improvements, Emerson’s policies still trail behind the standards of other progressive institutions. A statistical compilation of 197 parental leave policies at American universities and colleges reveals that private institutions offer an average of 10.1 weeks of full paid leave, while public colleges offer 8.2 weeks—Emerson offers a measly two.

What choice are parents left with if they or their child suffers from a minor sickness that continues past the mandated 12 weeks in Emerson’s current policy? New parents relinquish their accrued personal, sick, and vacation days for pay during their leave. For some, this is the only way to remain financially afloat. Following the leave policy offered to them should not impact how they care for their children once they’ve returned to work.

Even more so, parents should not have to file for disability after childbirth to receive pay. Other colleges, such as the University of Virginia, and Santa Clara University, enforce similar short-term disability policies. Though a new baby has the potential to physically stop faculty and staff from completing their jobs, a child is in no way a disabling factor in parents’ lives. By having faculty claim short-term disability, Emerson’s maternity leave policy prioritizes individuals’ jobs over their familial decisions.

Despite these policy flaws, Human Resources representative Julie Spataro said in a phone interview that even though revised leave of absence policies will debut in early April, she believes parental leave policies would see no change as they are mandated by the federal FMLA law.

Emerson’s parental leave of absence policies may also affect the student population. An article in The Guardian cited a study from Warwick University which found that qualified women on staff were far more likely to leave their positions, disrupt or even end their careers at universities with shorter paid leave policies. If Emerson wants to maintain their talented female staff members and professors for the benefit of their students, upgrading parental leave policies should be a top priority.

The lack of progressive parental leave policy at Emerson inevitably begs the question—is Emerson refraining from improving its regulations to shield off faculty and staff members who will take advantage of it? Glassdoor and CNBC lists U.S. companies with the best parental leave policies. Wouldn’t a place on these lists only attract more accomplished men and women who are also interested in starting families?

If Emerson cannot amend its postnatal care policies, then the college’s administration should be at the forefront of a state or national movement advocating for improved regulations. As a forward-thinking institution, the college should be leading the nationwide change to aid working pregnant women, rather than upholding the long-standing suppression of women’s rights and entitlements regarding childbirth. This inaction implies indifference.

In a nation with one of the highest infant mortality rates among developed countries, and the lowest quality relationships between father and child, poor parental leave only adds to the list of negative factors affecting children’s health today. Emerson’s inadequate policies and lack of action perpetuate the federal law’s unseemly evaluation of American families’ needs. And simply, the college’s lack of protest against the law is a disservice not only to its faculty and staff, but also to its students.