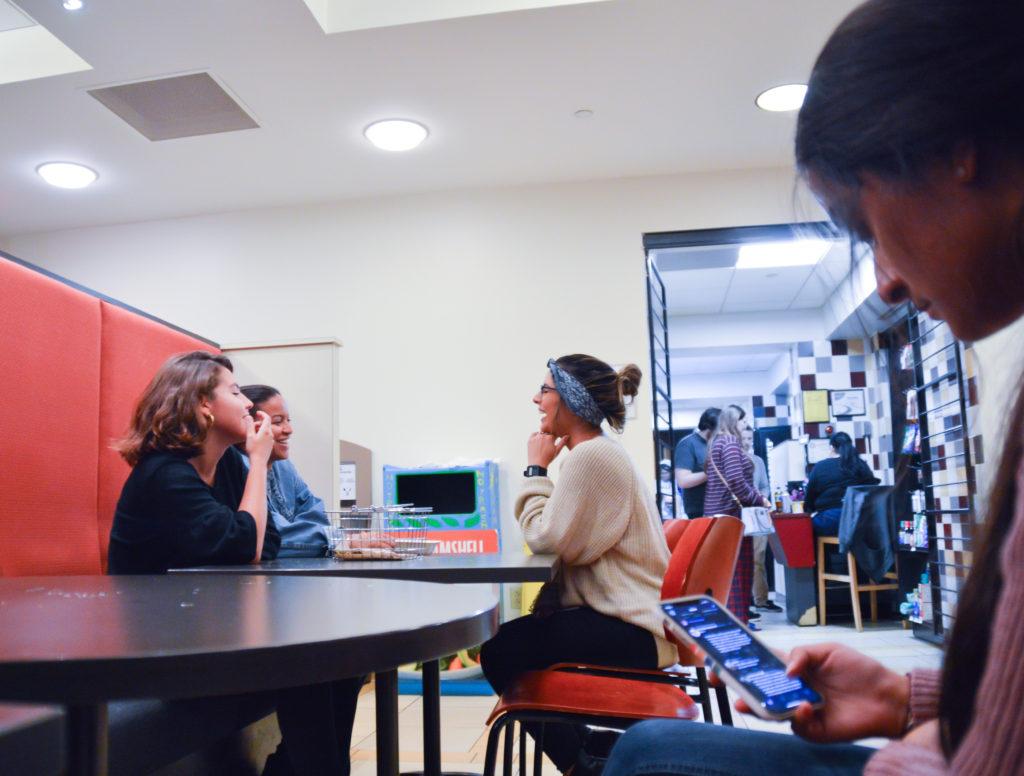 International students may hesitate or avoid interacting with domestic students because of the language barrier and cultural differences. / Photo illustration by Erin Nolan

One day, as I sat struggling with a reading assignment, my roommate simply asked, “What’s up?” I wasn’t sure how to reply. In China, I never studied such exchanges in my English classes. I asked her, “How do people usually respond when asked, ‘What’s up?’” She told me I could just answer “All right” or “Nothing.” So I nodded my head, said, “Okay, then I am all right,” and that was the end of the conversation.

For international students raised with a different cultural background, socializing can be challenging. International students may hesitate or avoid interacting with domestic students because of the language barrier and cultural differences. For me, it takes more effort to speak in English, because my brain automatically translates my ideas Chinese, my first language, and I have to re-translate my ideas to English. Sometimes I  fail to use the right word to describe my feelings accurately.

Freshman Zichen Zhou, who is not a native English speaker, said he’d rather stay silent than struggle in a conversation with friends. Because of the language barrier, he sometimes cannot fully express himself to make his friends genuinely understand his feelings. He said socializing with friends is different from participating in classes.

“When I failed to organize my language in class, my professor would ask ‘Pardon?’ [to understand what I meant],” he said. “But my classmates would not.”

Ziyang Lin, a Chinese first-year student, said that she had difficulty finding topics to talk about with her American friends.

“Sometimes I heard my classmates laughing, but I had no idea why,” she said. “I thought I might interrupt them by joining their conversations.”

A lot of international students experience these socializing problems. However, hesitation and anxiety regarding communicating and socializing with domestic students can be resolved one way—by speaking more.

By talking more, the language barrier diminishes. Communicating in English may be harder for some international students, but they can improve with practice. Oftentimes, I’d stop talking because I did not want to botch the conversation with awkward sentences. I remained silent but later realized it’d become a bad habit. It can be difficult to speak up, but it becomes easier with practice.

My mother once called me after orientation week, and asked if I had had any new friends from America. I said I hadn’t. I decided then to force myself to talk to others. Once I was on the elevator with a domestic student. I made up my mind and tried to appear casual, “Your boots are cool.” She said thanks and told me more about her boots. I was more relaxed to ask follow up questions and we talked naturally. Starting a conversation was not that hard. The more I talk, the more confident I become. Although I am still struggling to speak fluently, I have made progress. Language barriers can only be solved with consistent practice.

Talking more can also help us recognize cultural differences. During orientation week, my friend Grace invited me to have dinner with her friends. While eating, Grace and her friends discussed the television series “Black Mirror.” I had never watched “Black Mirror,” so I inquired as to what it was. They explained their favorite characters and described the show’s creepy moments.

In that half-hour talk, I did not feel excluded. Rather, I learned about an interesting sci-fi show and, by conversing about my friends’ interests, I did not bore them. I didn’t know anything about the genre, but I still had a pleasant conversation. What I did wasn’t complicated—I just asked what they were talking about.

We should believe that our words are indispensable. I come from a country with ideas and customs with which others are unfamiliar; these cultural elements make up my brain structure, which enables me to construct opinions towards everything I feel and see. My voice is different and it brings a fresh perspective to others.  My confidence and the confidence of my culture gives me the courage to initiate and engage in conversations with other students. I realize I don’t speak English fluently, and I realize I don’t have a deep comprehension of American culture. However, what I truly believe is that my voice is valuable, and I will continue to share it.