Opinion: Will there be mass violence on Election Day? 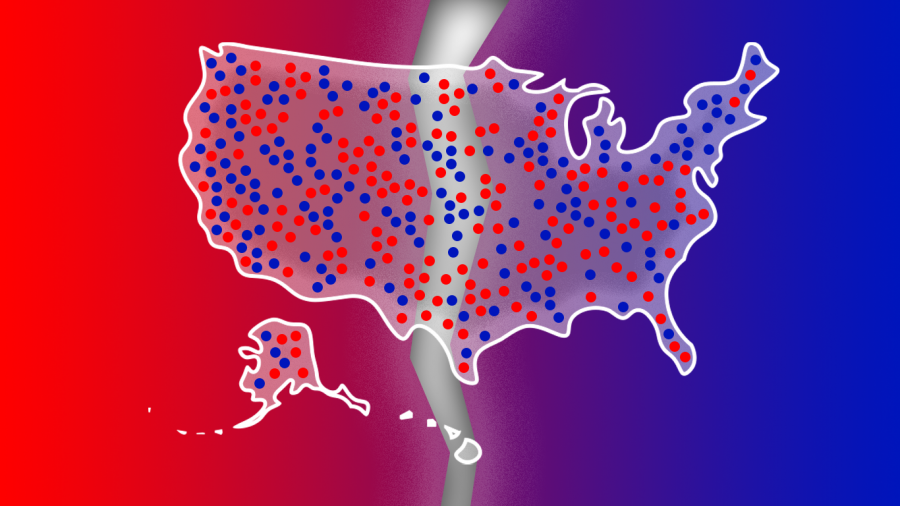 The question raised in the title of this piece is one that is almost unanswerable, and that is due in part to the fact that everything is on the line

From watching the news or even looking outside, a conflict seems inevitable. Political polarization is up, gun and ammunition sales have spiked, killers like Kyle Rittenhouse are being made a hero by the far-right, and protests have been ongoing since June. Police continue to kill unarmed Black people in the street, and our institutions are being sabotaged from the inside. Armed far-right militias patrol U.S. streets and groups like the Boogaloo Boys and Atomwaffen have been rooting for and plotting the collapse of society in order to usher in a white ethno-state. It leads me to believe the probability of an American civil war is not unlikely.

A civil war can be defined as when two or more groups of people with political differences start to kill each other with weapons. Firearms are now more evenly distributed now than they were just a year ago. This can mean two things. One possibility, of course, with a greater number of guns in the hands of a violent far-right, in combination with the furthering political divide, is an increase in domestic terror. White supremacists were responsible for the majority of US domestic terror attacks in 2020, with only one attack being perpetrated by a self-described “anti-fascist.” Said attack was the first killing in the US linked to an antifascist in 25 years. The point is that the American far-right is violent, has been violent for years, and will continue to be violent for years to come.

However, the threat of violence from an insurgent group against a dominant group puts the dominant group’s power in check. With more guns in the possession of the left, the right may be deterred from carrying out acts of violence. This is mutually assured destruction on a smaller scale. While mutually assured destruction is not a policy I’d advocate for under any circumstance, one cannot deny that when it was last put into practice, the world did not face nuclear war. While armed far-right militias and “lone gunmen” have carried out shootings at protests, the lack of an organized follow-up of mass violence could be due in part to the fact that violence is no longer one-sided.

There is a left-wing resistance, and they are not afraid to speak the language of violence. The threat of violence itself is a potential deterrent. These far-right wingers who have a motive to kill their political enemies know that there is a significant risk that they too may die–and they’re not willing to. But as we’ve seen in the past with the likes of Timothy McVeigh, perpetrator of the 1995 Oklahoma City bombing, maybe that person willing to die just hasn’t come around yet.

One thing I notice that is different about America now compared to other countries that have been plagued by civil war in the past is that there is a not an insignificant number of Americans who believe that civil war is a very real possibility. They see the threat and see it coming, and this awareness is something unique. But much like how the increased presence of firearms could both deter violence or catapult us towards it, the increased awareness of tragedy in America can lead to desensitization.

It’s incredibly easy for the majority of Americans to separate themselves from an imminent threat and carry on living life as normal. In Portland, Oregon, bars remain open while fascists and antifascists clash in the streets. Another way to look at it is through the lens of what I call “the brunch problem.” There’s a certain allure to the idea of “returning to normalcy.” In the midst of a pandemic and rising social unrest, those who had the privilege of ignoring politics want nothing more than to be able to get away with it again, to the point of such a fantasy being Biden’s main campaign promise. People want normalcy in a country where “normal” is a problem. Those who want to be able to ignore politics because political unrest does not directly affect them, and instead go back to eating brunch.

According to BuzzFeed’s Peter Aldhous, “the nation will still be a powder keg that is waiting to blow, even if a Biden landslide means that Trump has little choice but to step aside.” A Biden victory is not the be-all, end-all. If you look at other countries who’ve had civil wars, they are generally much more economically unstable. And while America is a wealthy country on paper, it’s a wealthy country with a lot of poor people, ridden with income inequality, made only worse when the rich get richer and do everything in their power to ensure the poor get poorer.

To put it simply, America was broken under every president, and it will continue to be broken under either Trump or Biden. A Democratic president isn’t going to be the solution to years of systemic failings on behalf of the government. The government hasn’t taken care of its people,  and its people do not trust it. You can’t compare America to other countries, because the circumstances that could lead to a second American civil war are uniquely rooted in our history.

A modern American civil war isn’t going to look like a stereotypical war. It isn’t going to be one army versus another. It’s going to be an amplification of what we’ve already seen in these past few months. Imagine the Rittenhouse shooting, but with a higher body count, happening somewhere every week, and involving exchanges of fire between multiple nonstate groups. According to Bellingcat’s Robert Evans, that’s the second American civil war.

However, such a thing is preventable. I assume most people don’t want to die, and most people don’t want a civil war. As awareness of the possibility rises, the chance for a de-escalation of the threat comes with it. So, will we see a second American Civil War? I don’t know, and none of us will until it happens.

Claire Rodenbush is a junior majoring in creative writing. If you would like to respond to this thought piece in the form of a letter to the editor, email Letters@BerkeleyBeacon.com. Letters may be edited for style and clarity.