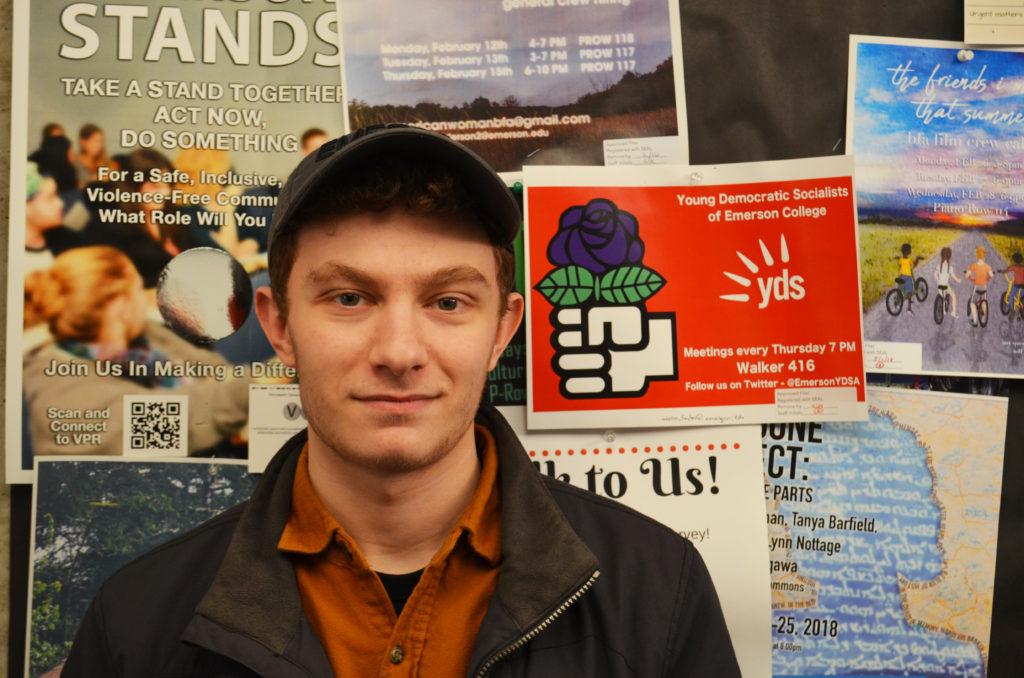 Roommates Seamus Malekafzali and Aaron Foster share both a 2 Boylston Place triple and a dedication to leftist politics. The two freshmen started a new group, Young Democratic Socialists of Emerson, as a way to support left-wing socialist ideals and engage in activism in campus and around Boston.

Freshmen Foster and Malekafzali hope to show these students that there is a political party for them, so they started holding meetings for the group every Thursday at 7 starting on Jan. 25, 2018.

Foster said he hopes to bring about change not just by generating support from civilians and reaching out to elected officials.

“We’re talking to regular people who many in the media would say don’t have a lot of impact, but actually they do if they organize around an issue,” Foster said.

Foster said he saw the walkout organized by Protesting Oppression With Educational Reform in Oct. 2017 as very effective and wanted to organize a similar event for his group’s core issues.

“In terms of things specific to Emerson I think tuition is one of the biggest issues. We’re one of the most expensive colleges and there are far less financial aid opportunities than other colleges,” Foster said.

In addition to bringing awareness to issues on campus, Foster says he hopes the group will also spread awareness about Democratic Socialism and what the ideology stands for.

As a member of the group, freshman Fintan Grafe said he wants to make sure action is the primary focus.

“Many leftist groups are accused of meeting and not doing anything. We’re trying to break that cycle,” Grafe said.

Grafe acknowledged the fact that many people are instantly skeptical of socialist ideologies because capitalism is the established norm, but said he hopes people remain open-minded enough to look past the label.

“[Skeptics are] not wrong for being wary of the idea. I understand why there’s a stigma around socialism, particularly in America,” he said.

Malekafzali grew up with two leftist parents, his dad being a Democratic Marxist. Eventually Malekafzali decided he could no longer remain passive about leftism.

“As I was researching into leftist movements, I knew I couldn’t just talk about it,” Malekafzali said. “I needed to take action.”

As of now, the organization’s is focusing on making themselves known and increase membership.

“I’m still learning about how to navigate this and how to advertise,” said Malekafzali.

Though attendance is low at the moment, Malekafzali does not find this concerning.

“I used to serve on the board of my University of Oregon Young Democratic Socialist Association, and even though they were going strong for about two years, they only get about 15 per meeting, so the fact they we have 5 or 6 people at this stage I would say is pretty good,” Malekafzali said.

Interest has generated online—the group managed to build a 26-person email list, but only a few have made it to meetings.

Foster and Malekafzali hope to reach out to other left-leaning activist organization on campus that they admire and support such as POWER and the Socialist Alternative, which has been having Socialist Feminist meetings at the same time as the Young Democratic Socialists of Emerson. Foster admits that this scheduling conflict might play a role in their low attendance.

At the moment, the organization consists of mostly freshmen, but Grafe sees this as an opportunity rather than a setback.

“If we can keep this growing for four years, once we graduate, we can pass the torch to the next leaders so that this can be a permanent thing,” Grafe said.

Correction 3/14/2018: A previous version of this article incorrectly stated that Malekafzali’s father is a Communist. This has been accurately changed to state he is a Democratic Marxist.