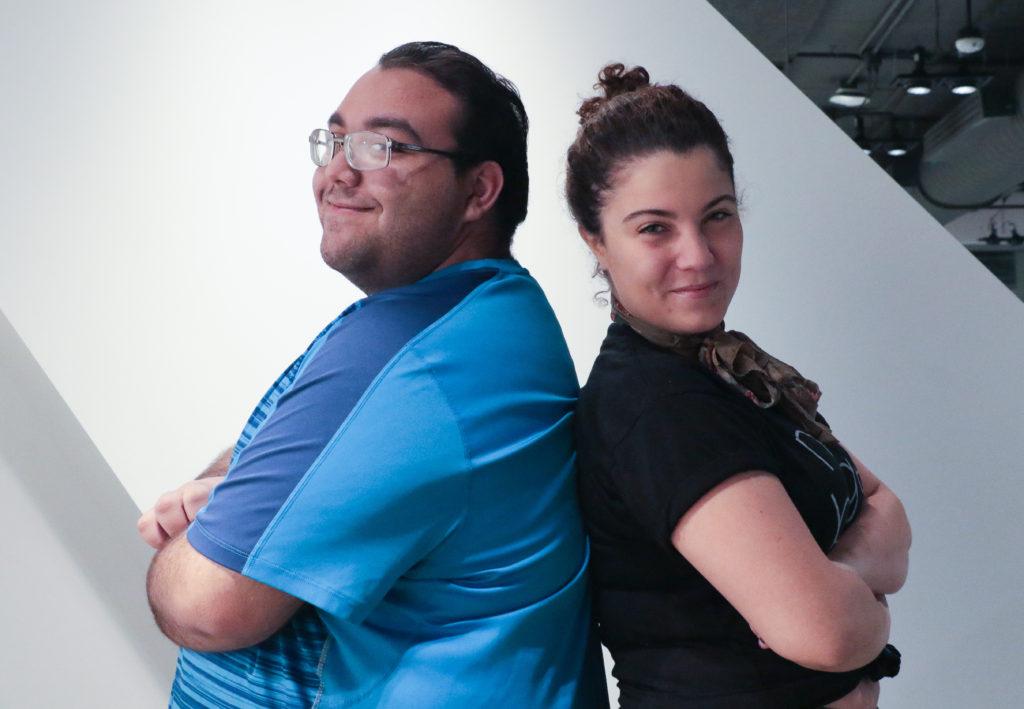 Sophomore Anthony Rodriguez and junior Cassie Poirier thought Emerson didn’t have enough resources for first-generation students, so they made their own. / Tivara Tanudjaja / Beacon Staff

Junior Cassie Poirier identifies as a first-generation college student, yet she didn’t know what that meant or the challenges it entailed until freshman year.

“It was this feeling that everyone else around me was more prepared, not only academically, but socially and just existence-wise,” Poirier said. “There was this sense of, ‘We know how to navigate situations like this and places like this.’”

Poirier said she didn’t know who to reach out to for advice freshman year when she realized Emerson did not provide enough resources or support for first-generation college students like herself. She said she felt she must take the matter into her own hands and started First Gen E-M with sophomore Anthony Rodriguez.

Poirier said she and Rodriguez, the only other first-generation student she met at Emerson, decided to create an organization for students like themselves after a resident assistant introduced them to each other.

First Gen E-M aims to provide first-generation college students with the resources and connections originally unavailable to them. Poirier said they want a collaborative organization that communicates with students and bases their work on their needs.

Poirier said she and Rodriguez work closely with the Division of Student Affairs and the Office of Student Success to create places for first-generation college students to get financial support.

“That is something that is a real big part of the first-gen experience—money and loans, and trying to figure that out—it’s a real nightmare. And it’s caused me to almost have to drop out of Emerson multiple times,” Poirier said. “And it’s caused me to really suffer as far as grades are concerned.”

Rodriguez said he always believed he would attend college despite his parents never finishing high school. When applying to colleges, Rodriguez said he never thought of himself as a first-generation college student and didn’t realize the stigma around students like him before starting at Emerson.

“Knowing that I go to a school with mainly white, privileged kids—being a person of color, low income, and first-gen—I know that I have such a different viewpoint of life,” Rodriguez said. “At first, when I first realized it, I felt like a fraud for being here for a little bit.”

Both Rodriguez and Poirier said financial aid poses the main struggle for first-generation college students. They said they took out government loans and are financially independent.

Rodriguez said he faces $80,000 in debt due to limited financial aid from the school after only two years at Emerson.

“Actually, when I had applied, I never told my parents how much it cost to save them the heart attack. I dealt with all the financial aid stuff on my own. I filled out my FAFSA on my own. I did the Parent PLUS Loans on my own,” Rodriguez said.

The organization hosted an event on Friday where Carol Smolinsky, associate director of student success, offered financial counseling. Smolinsky, Poirier, and Rodriguez helped students fill out their FAFSA and answered questions about their financial concerns.

Poirier said their organization, which just began planning regular events this semester, will host two events a month. One will focus on an educational aspect such as the FAFSA event. The other one will allow students to socialize and connect with others sharing the same experiences.

The two students said they hope SGA approves them for the next academic year. Meanwhile they work with the offices on campus to reach out to as many first-generation college students as possible.

Chris Daly, director of retention and student success, said Emerson only started tracking data on first-generation college students about five years ago, but the school now actively tries to better meet the needs of these students.

“I think a role our office could play, should play, and can play is just raising awareness among faculty, staff, and students and the rest of the college community, just about first-generation college-goers and what some of the great things they bring are and what some of the challenges that they might be facing are,” Daly said.

Last year the Office of Student Success partnered with others on campus and started a free one-credit class called “Emersion” that meets once a week and helps incoming students transition into the school.

Daly said he hopes the class can provide the extra support that some first-generation college-goers might need and make them feel comfortable at Emerson.

“I think for some students it’s just having someone on campus—a faculty member, a staff member, a student employment supervisor—who feels like gets them and understands a little bit of the context of what they’re going through and their life experience,” Daly said. “Our hope is that we can provide a little bit of that too so that students can just feel comfortable.”

“It was actually super difficult because I know that in American high schools you have counselors to help you with your applications. So, basically, I did everything myself,” Morier said. “It’s hard because you’re supposed to turn to your parents when you want to talk about these things, but they didn’t know.”

Poirier said, although the school has gotten better at answering their needs, Emerson needs to change how students and staff think about first-generation students.

Rodriguez said he hopes Emerson becomes a better place for first-generation students by the time he graduates.

“Even though I didn’t get the chance to get that for myself, I am so grateful that I’m able to give it to other students, whether it be new students or returning students. Because, honestly, someone has to do it,” Rodriguez said.