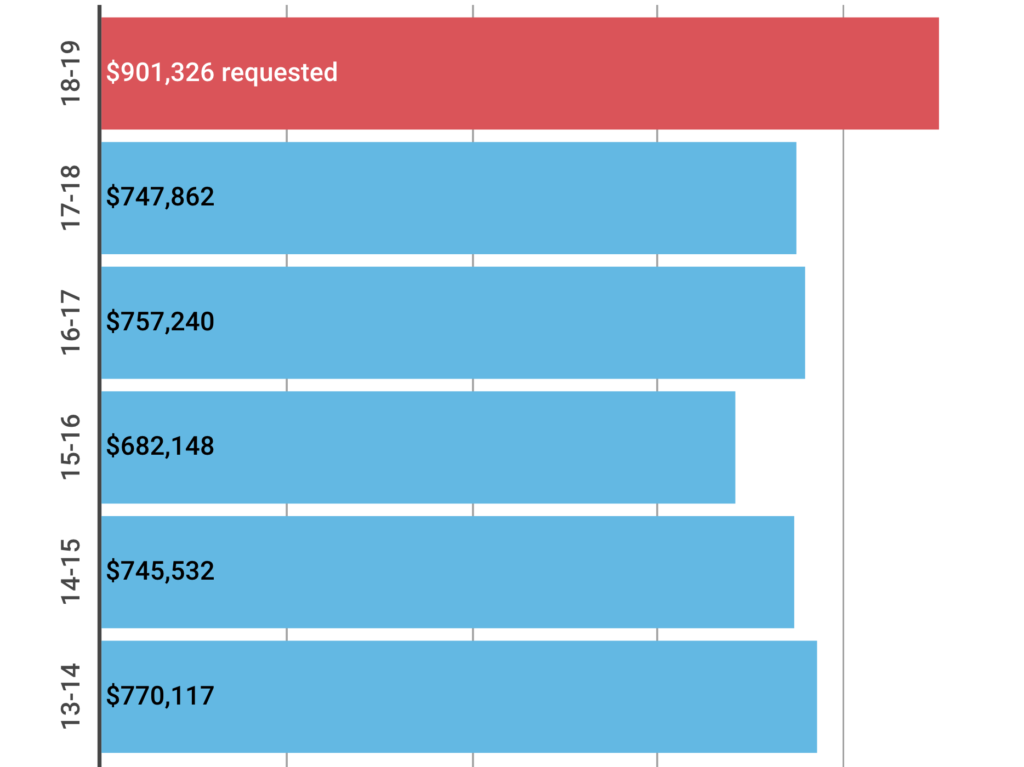 ABR allows SGA-recognized organizations, and SGA itself, to apply for a yearly budget. Once organizations turn in their requests, SGA holds a private meeting to decide each organization’s financial allocation for the following academic year and notifies them by June 1.

The money SGA allocates to organizations is funded directly by undergraduate students through an $800 yearly charge called the student services fee.

One aspect of the increase is the new SGA scholarship, which is funded in part by the student services fee.

SGA members said in previous meetings that the scholarship is aimed at student-leaders and will not be available to incoming freshmen or transfer students. SGA wants to raise $50,000 by the end of the year for the fund. To start, they submitted an appeal request of $25,000 and plan to find another $25,000 in unspent organization money before school lets out for summer.

Executive Treasurer Ian Mandt speculated that SGA does not have enough money to grant every single request to the fullest extent. The student government estimated they can allocate a total of $796,650 to organizations for the 2018-2019 school year—compared to the $901,326 requested.

“I’m not surprised,” Mandt said in an interview.

To decide the total amount of money available for allocation for any given year, SGA estimates the number of undergraduate students for the upcoming year. They then multiply this number by $226—the amount of money SGA receives per year from the student services fee.

“That’s always the case,” Mandt said. “Every year we give out less than is requested, part of that is due to policies that we just can’t fund certain things that are requested.”

When deciding requests, Mandt said SGA adheres to the Financial Advisory Board’s bylaws. According to the bylaws, when determining budget requests, SGA takes into account the number of active members, the benefit of the proposed spending to the student population, and if the organization spent its funding responsibly in the past.

“The rest of it follows the priorities that organizations list,” Mandt said. “If we get to the point where we need to start cutting things based not on policy, but on the actual availability of funds, then we start cutting based on what the lowest priority items are.”

Low priority items are expenses an organization deems less important than those that come before them.

Mandt also said when an item gets cut, SGA provides an explanation in the form of a Google Documents comment. However, when an organization gets awarded a budget, they can spend the money on whatever they choose. If SGA cuts something the organization feels is important, they can reorganize their funds to pay for said item.

“It’s not like an appeal where you are restricted to the things it’s approved for,” he said.