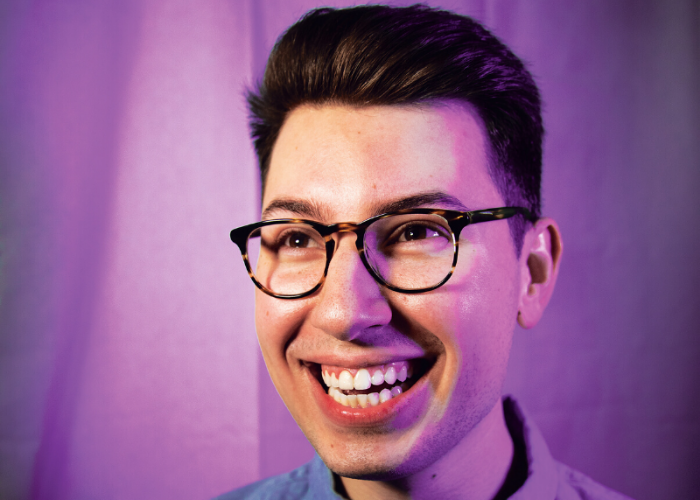 Will Palauskas served at Executive Vice President during the fall 2019 semester.

The race for the Student Government Association’s executive presidency was thrown into turmoil last week after the two candidates originally slated to compete for the position abruptly withdrew from contention, leaving it at risk of vacancy.

Following mounting pressure from peers to bring experience to the organization’s premier role, Executive Vice President Will Palauskas told The Beacon in an interview Tuesday that he is officially organizing a write-in campaign for SGA’s executive presidency.

The upheaval comes after current Executive President Raz Moayed prepares to step down as she will travel to Emerson’s Los Angeles campus in the spring semester.

“There’s a lot of things that I have on my mind, and if I can be of use to SGA and of use to the future of this college, especially whether it’s with the Marlboro merger or the students’ outlook on construction and all that kind of stuff, I figured, why not?” Palauskas said in the interview.

Palauskas officially kicked off his campaign early Wednesday morning, sending out invitations to a Facebook event entitled “Will Palauskas for SGA Executive President,” scheduled for Dec. 11, the day voting begins.

A candidate press night, intended to provide students with the opportunity to learn about candidates’ stances and platforms, is scheduled for Thursday. Voting in the election will run from Wednesday, Dec. 11 through Friday, Dec. 13.

Prior to Palauskas’ announcement, the competition for SGA’s executive presidency appeared to be a two-person race. Sophomore Jake Sockett and SGA Sustainability Commissioner Gianna Gironda had both entered the race before abruptly withdrawing.

Sockett, an outsider to the organization, garnered the constitutionally required 50 signatures to appear on the ballot in the week prior to Thanksgiving, but quietly dropped out before beginning a campaign.

Sockett declined to comment on his decision to withdraw from the race.

Gironda, a senior, told The Beacon in an email that she intended on running for the presidency and began collecting signatures. However, before she could begin campaigning, she received an email from Director of Student Engagement and Leadership Jason Meier informing her that she did not meet the appropriate 2.7 GPA prerequisite for the position, according to Gironda.

SGA’s constitution dictates that it is the job of the organization’s advisor—a role Meier is set to step into next semester after current advisor Sharon Duffy leaves to fill another role at the college—to determine the eligibility of candidates for elected positions.

Palauskas is now the only candidate for executive president, leaving a possibility that his current position, executive vice president—a position typically held for two semesters—will become vacant in the spring semester.

Should Palauskas win the presidency, SGA’s constitution dictates that it would be his responsibility to appoint a vice president.

“If the Vice President, Treasurer, or any departmental senator’s position becomes vacant in the second semester of an academic year after the midterm elections process has commenced, the SGA president shall appoint a replacement for the rest of the semester, subject to a two-thirds approval by a Joint Session,” it reads.

Already, Palauskas is branding himself as an experienced candidate who can successfully ease the college through what he describes as an upcoming period of change.

“This semester, especially after getting through the [academic] initiative and the [academic] town hall, I feel more confident about doing this than ever before,” he said.

In the Facebook event, Palauskas pointed to the upcoming merger with Marlboro College as a major transitionary period for Emerson, citing the approximately 100 students and 20 tenure and tenure-track faculty who could potentially come to the college next year.

“Together, we can help prepare our community for the changes in the future that are coming,” the event’s details section reads. “I’m asking for you to write me in because I believe I can help work towards a future that works for all of us here at Emerson College.”

Executive President Raz Moayed said she believes Palauskas is well-fit for the position.

“I think Will is going to make an amazing executive president,” she said. “Anyone who truly has a vision for this role and knows the ins and outs of SGA can do no wrong.”

News Editor Stephanie Purifoy did not edit this article due to a conflict of interest.