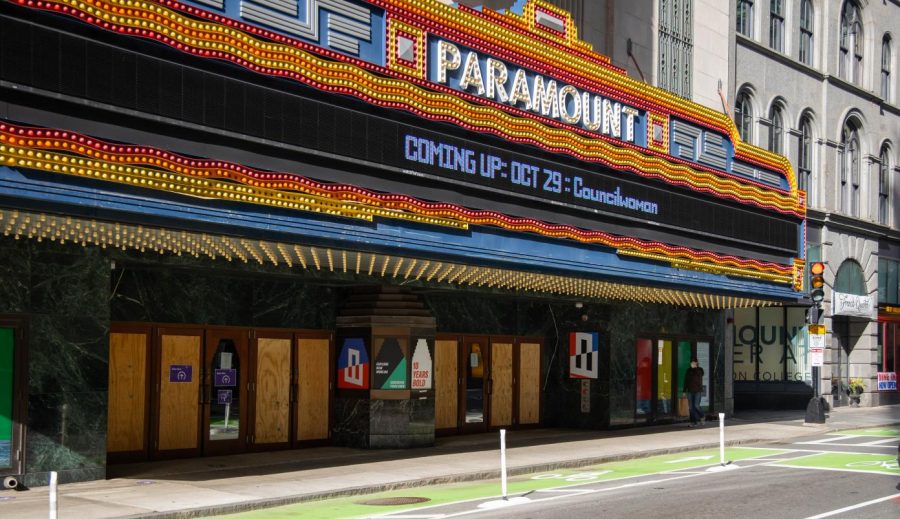 Boarded up entrances to the Paramount Theatre.

Four weeks into the fall semester, some students housed in the Paramount Center are being asked to move to new residences in the Little Building—despite the desires of many to stay right where they are.

Administrators notified students in the “Paramount Pod”—a small group of first-year and transfer students housed in the Washington Street residence hall—that they should expect to be moved to permanent lodging within the next several weeks. Students will be relocated to the Little Building as spaces are made available, concentrating first-time students in a single building closer to the nucleus of Emerson’s campus.

“Our hope is to complete all transitions within the next few months, housing all of our first-year Emersonians in one community,” read a Sept. 10 email from Housing and Residential Education.

The college chose to house the group of students in the Paramount as a temporary measure, according to Director of Housing & Residential Education Christie Anglade. The decision was made in response to the size of the incoming class of 2025. Emerson registered an unexpectedly strong enrollment of 1,060 first-year undergraduates, compared to 940 the previous year.

The 13-story Little Building, which is intended to house all first-year students, has a bed capacity of 1,035, according to Emerson’s website—with an undisclosed number of these rooms reserved as isolation spaces for students testing positive for COVID-19.

Anglade said students were notified of the housing situation over the summer, before moving in. However, many students felt that the college hadn’t adequately communicated the implications of the “Paramount Pod” to them—so when the Sep. 10 email reached the inbox of first-year interdisciplinary studies major Leila Minkara, it came as a complete surprise.

“My roommate was actually the one who told me, once the [Sept. 10] email was first sent out,” Minkara said, in an interview with The Beacon. “We both looked at each other in shock, we were in disbelief. It was very much out of nowhere.”

Minkara, like many of her peers, had been under the impression that because they had spent their first few weeks in Paramount—with little communication from the college—that Emerson had decided against, or simply forgotten about, moving them. After all, they were already settled in, going to class and getting to know their suitemates and neighbors.

“I remember they mentioned it in one of our [Resident Assistant] meetings,” Minkara said. “[They said] it would be ridiculous for us to have to move in the middle of the year—so it was very unexpected to get the email that it would be mandatory for us to move.”

Tomas Macasaet was conflicted when he heard the news. He said he understood why the college would want to move the pod students—but also felt that it would be far too much of a hassle at this point in the semester.

“You don’t really get as many social interactions [living in Paramount],” Macasaet said. “My roommate feels the same way—all of our friends are in the Little Building. Not only is it a five minute commute every day, but also, like, ‘Where are my friends?’”

Macasaet, however, said he had grown accustomed to the positives of living in Paramount—the suites, the bathrooms, even the quiet—and that he wasn’t looking forward to having his living space taken away so abruptly.

“I’m not going to be happy about it,” he said. “It’s just going to be a pain in the ass to move all of my things to the Little Building, especially before the winter break.”

Since the beginning of the relocation process on Sept. 14, the college has not yet moved any students without them specifically requesting a room change first, according to Anglade. However, students who do not request a room change will likely be assigned to a random roommate in the Little Building—or even to a vacant room.

“We would have to get acclimated with our new roommates,” Macasaet said. “It’s definitely going to take a toll, physically and mentally. I know that sounds pretty dramatic, but we’re going to have to balance time between getting to know our roommates while we have schoolwork. It could be a lot.”

For those students electing not to request a change, the Housing and Residential Services department plans to individually provide new room assignments “as soon as possible.” Macasaet, though, remains skeptical that the college will be able to move all of the Paramount Pod students into the Little Building.

“The reason there are [first-years] in the Paramount is that, apparently, there’s no space in the Little Building,” he said. “But it seems as though Emerson is like, ‘Oh, we’ll just move people around.’ That doesn’t help—unless you expect freshman dropouts.”

Anglade reiterated that all students of the Paramount Pod would be moved to the Little Building over the course of the semester—though she did not detail how or when the spaces would become available.

For students facing imminent removal, the college’s approach to the entire issue has been  less-than-forthcoming.

“There’s been no transparency whatsoever,” Minkara said. “For a communications school, they’ve done a poor job in the sense that they haven’t been really following up with any of their plans.”

“We don’t necessarily know when we’re gonna be moved in,” she added. “At least having some sort of timeline would have been a little nice—but we’ve been given nothing. A single email telling us, ‘Eventually, you’re going to have to move out. Prepare yourself.’”