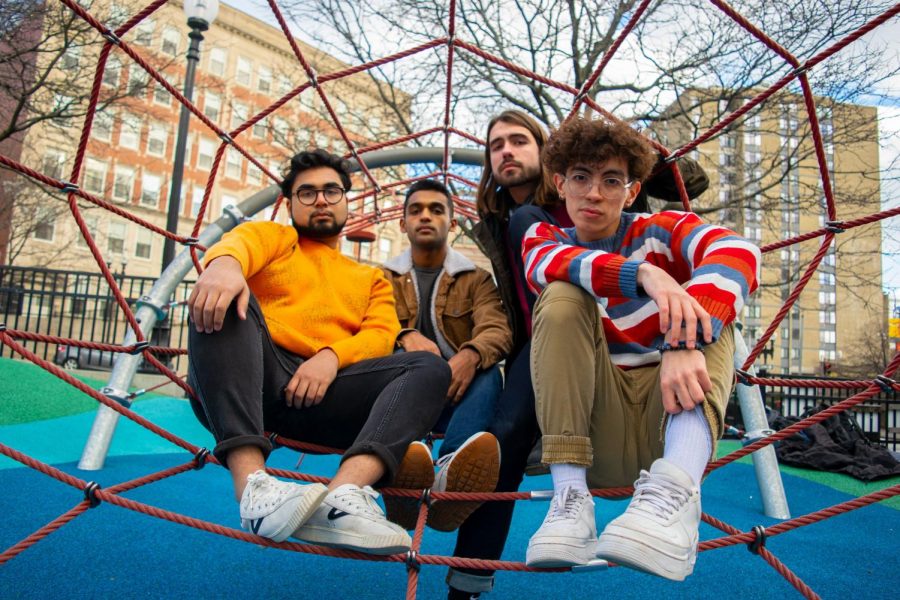 Sophomore drummer Amogh Matthews posted on the Emerson Musician Mafia Facebook in 2018 in search of a group of fellow musicians to jam with. He received a response from sophomore singer and guitarist Karthik Ramaswami that led to the creation of Sunsetta, a band the two describe as a “pastel” punk band.

“During our first rehearsal playing together, we started a song and ended the song together,” Matthews said. “If you are a musician, you know that never happens and I just knew we clicked.”

The group is made up of four Emerson musicians—Matthews, Ramaswami, sophomore singer and guitarist Thomas Chadwick, and sophomore bass player Henry Tyndall, who joined the band in Oct. 2019. Their new single and first music video will be released by the end of January, and they plan to release their first EP in April.

The band began rehearsing in March 2019 at Berklee College of Music, since Matthews has access to the college’s studio space through the ProArts Consortium. Chadwick described Sunsetta’s sound as a mix of alternative, rock, blues, pop and some punk, but the members of the band call Sunsetta’s style “pastel” punk. The style comes from their love for the mindset of punk music and pastel colors.

“When we say punk we don’t mean like punk, but like bring down the norms—punk as in the mindset,” Chadwick said in a phone interview. “We want to redefine masculinity.”

They performed their first live show in April 2019 during the EM Magazine release party at Studio 550 in Cambridge, Massachusetts. When the band first started out, Chadwick and Ramaswami wrote and composed all of the music. Over time, however, the songwriting process became more collaborative. Every member contributes to the final sound of a song by helping out with the composition.

“Now we are getting to a sweet point of collaboration where [Chadwick] or I come up with lyrics and the direction we want for the song, but then we as a band fill out the rest by helping with composition,” Ramaswami said. “We are very open when it comes to ideas. We want to come up with the best possible song, so the only way to do that is to listen to each other’s suggestions and ideas.”

Tyndall, who approached Chadwick about being Sunsetta’s official bass player at the beginning of the Fall 2019 semester, said the band plays with more dedication than he’s seen in his past music groups.

“I have worked for many bands in the past, but I have never seen the level of commitment like this band has,” Tyndall said.

During a trip to the Boston Museum of Fine Arts, Chadwick saw a building in the skyline with the company name of Sonesta—an international hotel chain.

“Sonesta is such a sick name for anything so I started to play around with the word and eventually I came up with Sunsetta,” Chadwick said.

Sunsetta will start recording for their first EP in February at Nothing Productions music studio outside of Boston. All four band members of Sunsetta plan to pay a combined $2,000 for the recording costs, spending money out of pocket and through donations from a GoFundMe page they plan to set up. Sunsetta will release the EP during their release party on April 25 at the Lily Pad in Cambridge.

“The EP will have Sunsetta’s ‘staples,’ the songs that we have been playing since the get-go,” Ramaswami said in an interview. “We want to progress forward, so we need more than just a SoundCloud to do that.”

Over the winter break, Sunsetta worked with sophomore William Rowley to produce a music video for their new single, Bruise, set to be released by the end of January.

The band has a live show on Jan. 16 at the Lily Pad in Cambridge and another on Feb. 10 at O’Briens Pub in Allston. Additionally, Sunsetta is planning a promotional summer 2020 tour. They will start in Boston and make their way down the coast to Atlanta, GA.

Sophomore Laura Phillips, a fan of Sunsetta and friend of the players, met Ramaswami during their freshman year. Phillips saw them perform at the April 2019 EM Magazine release party and she enjoyed their performance.

“You just know that their music is written by them because it’s based on their own life experiences as college students,” Phillips said. “You just know they are passionate about music in the way they perform.”