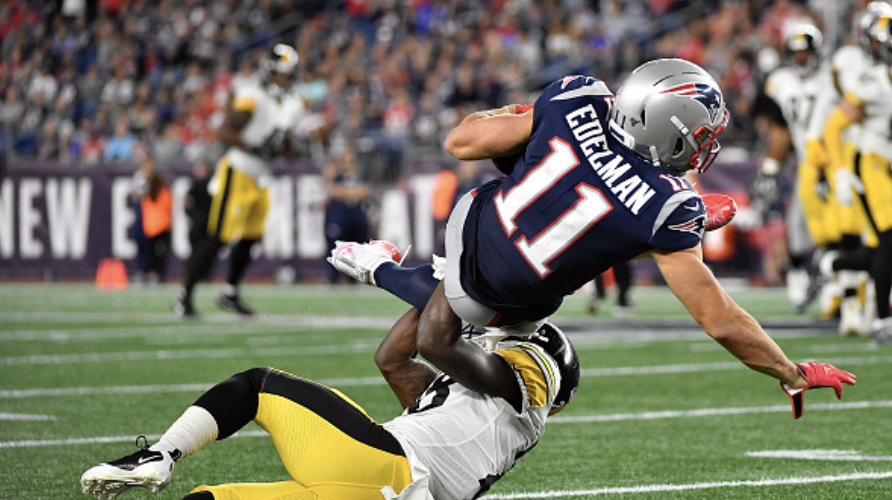 Embed from Getty Imageswindow.gie=window.gie||function(c){(gie.q=gie.q||[]).push(c)};gie(function(){gie.widgets.load({id:’xcdXN4OTRqNU6KOoiNGTvw’,sig:’Fma_ice1jaKPksOHrNcHd3EpNhvrbiQuyhf_PU6RWJ4=’,w:’594px’,h:’396px’,items:’1173256955′,caption: true ,tld:’com’,is360: false })});
The New England Patriots dominated in week one—and their defense has never looked better. While I watched the game Sunday night, one thing caught my eye: The Patriots’ tackling is impeccable.

During Matt Patricia’s last season as defensive coordinator, the defense struggled with tackling, especially during Super Bowl LII. Since Patricia’s departure, head coach Bill Belichick and the defensive coaching staff has placed a strong emphasis on tackling, which has shown a massive improvement in the overall passing and rushing yards allowed. This helped the Patriots shut down the explosive Los Angeles Rams offense in Super Bowl LIII and in their game Sunday night.

Even without linebacker Kyle Van Noy, the Patriots’ defense dominated the Pittsburgh Steelers’ offense and helped them secure a 33-3 victory at Gillette Stadium. The Patriots stuffed the Steelers’ running game, allowing only 32 rushing yards.

Steelers’ quarterback Ben Roethlisberger completed only 27 of 47 pass attempts for 276 yards and one interception against a near flawless Patriots defense. All-Pro cornerback Stephon Gilmore and a strong secondary shut down star wide receiver Juju Smith-Schuster, holding him to six receptions for 78 yards.

The defending champions made a statement with their first score, a 20-yard catch and run from quarterback Tom Brady to wide receiver Josh Gordon, who evaded tackles from two Steelers defenders to reach the endzone. This scoring play was just the start of the Patriots’ complete dominance over the Steelers.

Forty-two-year-old Brady threw for 341 yards and three touchdowns to continue proving his “Greatest of All Time” status in his 20th season with the Patriots.

After a playoff performance last season that debatably launched him into the Hall of Fame conversation, wide receiver Julian Edelman reached 500 career receptions, becoming the fifth Patriot to reach that milestone.

Wide receiver Phillip Dorsett set career highs with 95 receiving yards and two touchdowns. Although Dorsett’s playing time is expected to decrease with the arrival of star wide receiver Antonio Brown, he is proving that he still deserves snaps even with Brown in the mix.

I worried about the tight end position after the retirement of Rob Gronkowski. After Sunday night, I’m not worried anymore. Fullback James Develin saw more snaps than usual to help fill the void in the blocking game left by Gronkowski’s departure. The Patriots’ wide receiving core proved to be incredibly effective. Running back James White contributed 56 receiving yards Sunday night.

However, I worried about the offensive line. Last season, the Patriots had a consistent starting offensive line that only let Brady get sacked 21 times, placing them in the top three teams for sacks allowed. With left tackle Trent Brown joining the Oakland Raiders and veteran center David Andrews being placed on injured reserve, two out of five offensive linemen from last season were out of the lineup. However, the offensive line stepped up and only gave up one sack. I hope to see this effectiveness continue through the season.