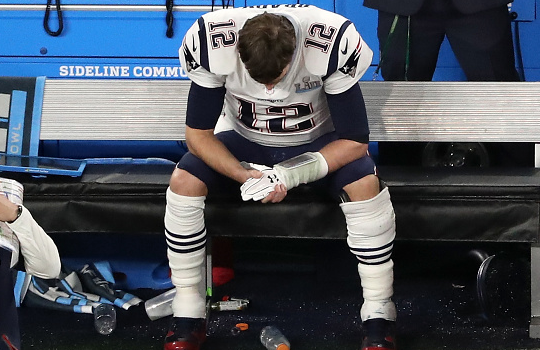 In the last few years, the New England Patriots turned their season around by December. No matter how they look through the rest of the regular season, the Patriots become a different team when entering the playoffs. This season, the Patriots could not change their story, which is why they were eliminated from the playoffs against the Tenessee Titans in their first wild card game since 2009.

The Patriots fell 20-13 to the Titans on Jan. 5, just their fourth playoff loss at Gillette Stadium. The Patriots offense looked stagnant and out of sync the entire matchup, with many dropped passes and overall, a lack of chemistry in the passing game. The defense managed to only give up 14 points despite allowing 182 rushing yards to Titans running back Derrick Henry. Patriots safety Duron Harmon intercepted Titans quarterback Ryan Tannehill at the start of the fourth quarter, but the offense failed to score off the turnover. The narrative of the game reflected the Patriots’ season as a whole, with the defense giving the offense more than enough opportunities, but with quarterback Tom Brady and company unable to capitalize on the other end.

There are plenty of reasons why the Patriots lost to the Titans. The wide receivers could not get separation from defenders and execute their main task of catching the football. Wide receiver Julian Edelman dropped a crucial pass on third down late in the fourth quarter that would have prolonged a potential game-winning drive. While these factors impacted the early end to their season, the Patriots were decimated by their lack of character in big moments.

As I watched the Patriots lose five games this season, I felt that the team gave up towards the end of important matchups. Their frustration always dominated over their perseverance. Brady struggled to lead the team down the field during his classic fourth-quarter comebacks, which he executed beautifully in prior seasons. The defense lost its dominant energy by the final few games after carrying the offense through most of the season. This team did not have the heart to push through until the very end.

When I think of a Super Bowl team, I think of a well-rounded, consistent team that can execute when facing adversity. The 2018 Patriots fit this description nearly perfectly. They pulled out comebacks in two nail-biting matchups against the Kansas City Chiefs and proved their dominance when entering the playoffs. The team showed consistency despite losing five games in the regular season. The 2019 Patriots never pushed through their difficult matchups and did not execute when it mattered most.

This season gave the Patriots a whole new dynamic heading into the offseason. The team faces many difficult decisions surrounding Brady’s status as a free agent, and it will likely take quite a bit of offensive retooling to convince him to stay for another season. Although I believe Brady will play another season in a Patriots uniform, he will be quite demanding this offseason, and his drive to win will be more present than ever.

The Patriots are facing a partial rebuild for the first time in years. With wide receivers coach Joe Judge heading to the New York Giants, the team faces an opportunity to overhaul their receiving core. If Brady chooses to sign before March 18, saving the team millions of dollars in cap space, the Patriots have many talented players to look into. Dallas Cowboys receiver Amari Cooper and Cincinnati Bengals receiver A.J. Green both enter free agency after disappointing seasons and could be looking for a change in atmosphere. The Patriots still need an answer at the tight end position after a lackluster season from Rob Gronkowski’s replacements. Patriots tight ends Ben Watson, Matt LaCosse, and Ryan Izzo gained only 418 yards all season, just 10 percent of Brady’s 4,057 passing yards. Players such as Indianapolis Colts tight end Eric Ebron and Los Angeles Chargers tight end Hunter Henry will be players to watch going into this offseason.

Looking ahead to the 2020 season, the Patriots have a massive opportunity to change the narrative and bounce back. With their season ending in disappointment and frustration, the team faces their largest moment of adversity since their loss in Super Bowl LII. Brady is known for thriving off of adversity, and next season now represents redemption for him and the rest of the team. If Brady returns to the field next season in a Patriots uniform, he will be more ready to dominate than ever.