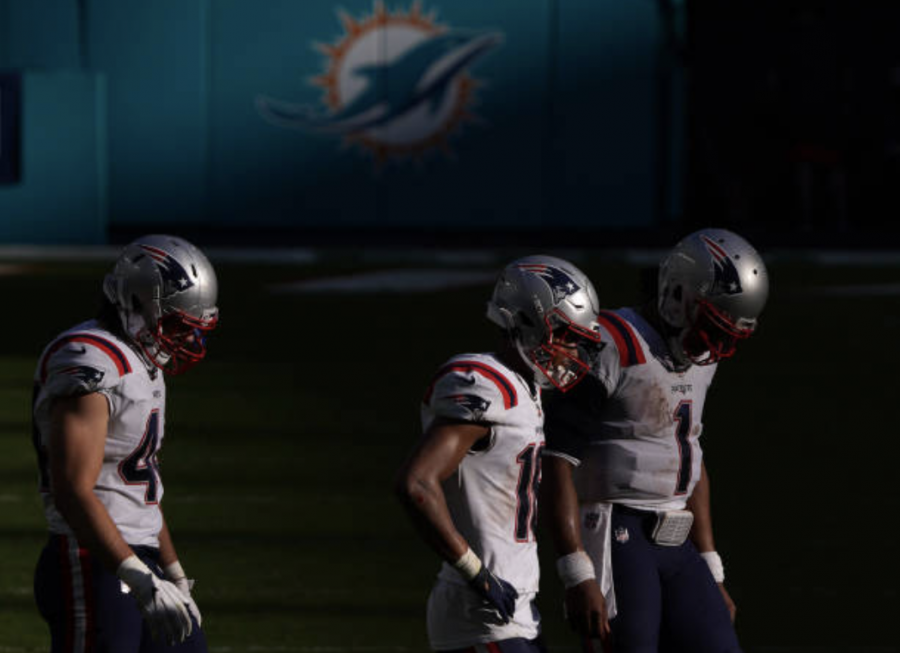 For the last 20 years, New England Patriots fans would look at the team’s schedule every year and most likely say “I’m thinkin’ 12-4 and a first-round bye,” and they would be right most of the time. It was never about if New England would make the playoffs, it was always about how far would they make it. That goes to show how spoiled Patriots fans have been since the turn of the century. But as the old saying goes, “all good things must come to an end.”

The Patriots were officially eliminated from the playoff race following a 22-12 loss to the Miami Dolphins on Sunday. The loss snapped an 11-year streak of consecutive playoff appearances for New England, and it marked the first time the Patriots will finish without a winning record since the 2000 NFL season.

“It’s obviously a disappointing day for us,” Patriots head coach Bill Belichick said in the postgame press conference. “We didn’t do anything really well enough to win the game. We didn’t deserve to win today.” Didn’t deserve it is right, Bill.

For the second straight week, the Patriots failed to score a touchdown and performed sloppily on offense and defense. Quarterback Cam Newton threw for just 207 yards and had a total quarterback rating (QBR) of a lowly 25. New England’s running game only mustered 117 yards in the absence of starting running back Damien Harris.

“It’s a tough loss,” Newton said. “It’s just unfortunate. We just didn’t do enough and that’s what it comes down to.”

Newton has been forthright with how New England’s season has gone, but every week has almost sounded the exact same—something he actually picked up on during his press availability.

“We just got to keep getting better,” Newton said. “I know that sounds like a broken record each and every day, but that’s what it really comes down to. When our best is expected, that’s when we have to be our best.”

On defense, it was a tale of not stopping Miami’s run game and injuries to key personnel. The Patriots gave up 250 rushing yards and saw Miami run into the end zone three times for touchdowns. This was also a Dolphins offense that ranked in the bottom third of the NFL in terms of rushing coming into this game, according to ESPN. On the injury front, starting Patriots linebacker Ja’Whaun Bentley left the game in the second quarter with an arm injury and did not return. Additionally, Patriots star cornerback Stephon Gillmore suffered a leg injury before halftime and is now expected to miss the rest of the season.

If you’re looking for any positives from this game, receiver Jakobi Myers continued his impressive season with a stat line of 7 catches for 111 yards—despite having a costly fumble in the third quarter.

“The team put me in a position to make plays and help the team win,” Myers said. “I didn’t do my job to the best of my ability.”

Regarding special teams, Patriots kicker Nick Folk went four-for-four on field-goal attempts, extending his streak to 25 straight successful field goals, according to ESPN. This shows how much New England has relied on Folk to get points on the board when the offense is stagnant.

It’s still mind-boggling to think that New England won’t be in the hunt for the Lombardi Trophy this season. You can say this was expected given a certain former Patriots quarterback taking his legendary talents to sunnier pastures and other personnel changes. Still, the Patriots’ 20 years of dominance were right up there with some of the most dominant sports franchises in American sports history, such as the Detroit Red Wings’  25 consecutive NHL playoff appearances from 1991 to 2016, and the NBA’s San Antonio Spurs who saw their streak of 22 straight NBA playoff berths come to an end this past season.

This is an unusual time for the Patriots and their fans alike, but the franchise’s era of Super Bowls and excellence had to come to an end at some point. After 20 years, this section of the book of the New England Patriots seems to have finally reached the last page in the chapter. While New England is still on to Buffalo and the rest of the regular season, they are also on to a new path with the potential for even more changes coming once the season is over. The times they are a-changin’ indeed.