Patriots fumble in the final minute, lose to Bills in fourth straight loss 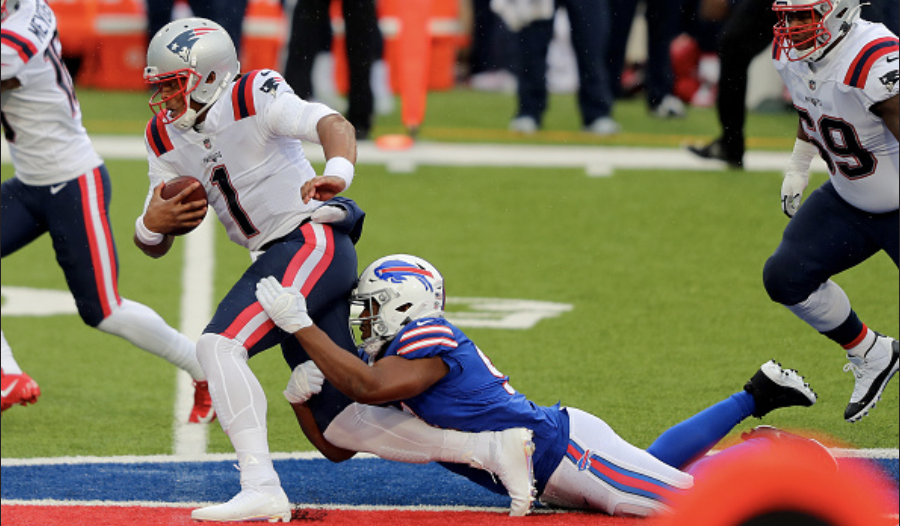 After last week’s downright terrible loss to the San Francisco 49ers, the New England Patriots were arguably in must-win mode heading into Sunday’s game against the Buffalo Bills. The result? Well, I think the headline explains it.

A costly Cam Newton fumble in Bills territory during the final minute halted any chance of a comeback win as New England lost to Buffalo 24-21, falling to 2-5 on the season. This is the first time since the 2000 season that New England has lost four straight games.

“It’s unacceptable,” Newton said in the postgame press conference when discussing the fumble. “I have to protect the ball. I still am jeopardizing this team’s success because of my lackluster performance protecting the football.”

Though Newton had a slightly better performance compared to last week, completing 15 of 25 passes for 174 yards and rushing for 54 yards and a touchdown, his fumble made it the fifth straight game Newton has had at least one turnover. Hit the yikes button with that one.

A bright spot on New England’s offense was running back Damien Harris’s performance. The second-year back ran for over 100 yards and a touchdown, averaging over six yards per carry. But, that isn’t what Harris wanted to talk about afterward.

“Losing is very frustrating,” Harris said in the postgame press conference. “The frustration level is definitely high. Moral victories mean nothing in this organization. We’re frustrated. I’m frustrated. The team is frustrated. We’ve just got to do better.”

There wasn’t just frustration on New England’s offensive side as the Patriots defense had plenty to be mad about, too. Though it did pick off Bills quarterback Josh Allen that led to a field goal for New England, the defense could not contain Buffalo’s running game.

New England gave up 190 yards on the ground and saw all three of Buffalo’s touchdowns come on run plays. It marked the third straight game New England allowed the opposition 100-plus rushing yards. Can I hit the yikes button again? I can? Okay, thank you.

This loss fits right in with New England’s season so far—it’s like a game of Jenga in which, except for a few lucky turns, the tower has crumbled over and over again on the Patriots.

“This is the third time we’ve been in the situation this year, and unfortunately we haven’t made enough plays to win,” Patriots head coach Bill Belichick said during the postgame press conference. “We just came up a little bit short. It’s disappointing.”

“Disappointing” is the right word to describe New England’s play of late. What seemed like a promising 2-1 start to the season transformed into a 2-5 hole which grows deeper each week for the Patriots to dig themselves out of.

If New England somehow does not win against the 0-8 New York Jets next Monday, Nov. 9, it’s simply hard to imagine how they’ll make it to the playoffs, especially with tougher games against the Baltimore Ravens, Arizona Cardinals, and Los Angeles Rams fast approaching.

Here’s to hoping New England can finally turn it around next week. On to New York.