Patriots: Offense in need of identity 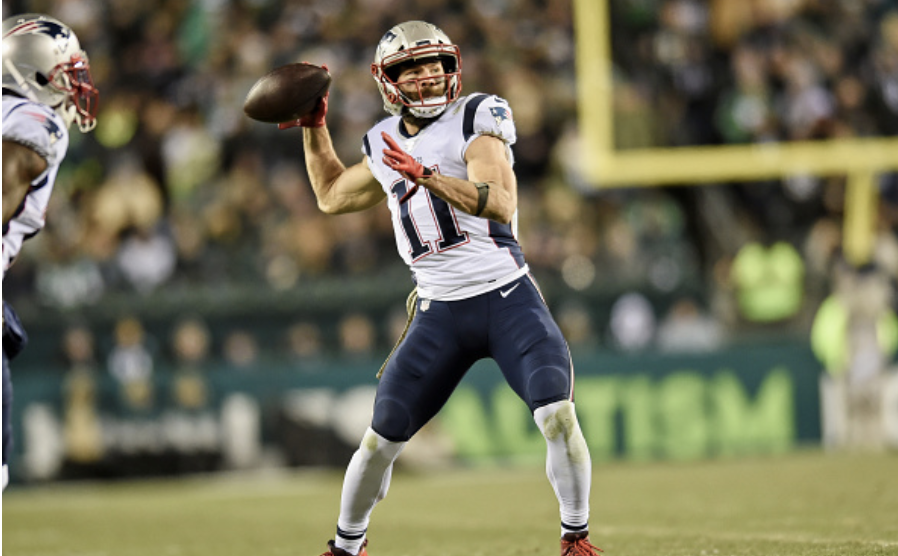 Embed from Getty Imageswindow.gie=window.gie||function(c){(gie.q=gie.q||[]).push(c)};gie(function(){gie.widgets.load({id:’WnebUfYPQN1E-qukKinJeg’,sig:’1oVNkGS77ik_lhbpRAaNyjomw6Cb389WAjH07kvz-cQ=’,w:’594px’,h:’395px’,items:’1183237034′,caption: true ,tld:’com’,is360: false })});
The New England Patriots’ offense looked stale during Sunday night’s 17-10 victory over the Philadelphia Eagles. Consistent injuries and a lack of explosive plays leave the Patriots’ offense without a clear identity, which could hurt them in their pursuit of another championship.

Quarterback Tom Brady and company struggle to find a rhythm. I often place the blame on the offensive line, but there are more factors contributing to this issue. Having an inconsistent receiving core is especially challenging for the 42-year-old Brady. Brady, wide receiver Julian Edelman, and running back Sony Michel are the only offensive players to play in all 10 regular-season games.

Because of this, Brady does not have solid chemistry with most of his receiving core. Trust is an essential part of a functioning and unpredictable offense, and injuries prevent Brady from establishing this with most of his receivers. Even though the team recently acquired wide receiver Mohammed Sanu Sr. and activated wide receiver N’Keal Harry from the injured reserve, Brady is still building relationships with new talent.

The roster lacks a deep threat after releasing wide receiver Josh Gordon. Brady tries to create big plays with Edelman but often fails because he is less of a deep threat and is averaging 10.5 yards per reception this season. These plays often result in incomplete passes or interceptions, which interrupt any rhythm the Patriots’ offense establishes during the drive.

Even though Brady does not have established chemistry with Sanu or Harry, there is still plenty of time left in the season to form those relationships. With more development, Harry could become the deep threat and explosive player the offense needs.

The Patriots will receive a bit of help on the offensive line with the return of left tackle Isaiah Wynn off injured reserve. This addition will improve the Patriots’ run-blocking, which has suffered the entire season. With an injury-filled offensive line and the absence of fullback James Develin due to injuries, the Patriots rank 30th in the NFL in rushing yards per attempt and 24th in rushing yards per game. The return of Wynn could bring life back into the struggling run game.

Next week’s matchup against the Dallas Cowboys presents multiple challenges for the Patriots. The Cowboys’ offense is the most well-rounded unit the Patriots have faced so far. Dallas’ offense ranks first in the league in total offensive yards and passing yards per game and its offensive line allowed only 12 sacks through the first 10 games of the season.

Cowboys’ running back Ezekiel Elliott boasts 833 rushing yards, seven touchdowns, and 220 receiving yards. When facing the New York Jets, who allow the least rushing yards per game this season, Elliott rushed for 105 yards and one touchdown.

The Cowboys receiving core is filled with talent, with their top three wide receivers combining for 2,059 receiving yards and 13 touchdowns. Shutting down all three wideouts will be a difficult task for the Patriots’ secondary.

Dallas also ranks among the top passing defenses in the league, giving up only 216.9 yards per game. This poses a massive threat to a rebuilding Patriots offense, which heavily relies on Brady and the passing game.

This matchup and their difficult stretch of upcoming games act as an opportunity for the offense to find their identity. With the recent additions of key players and a game against a well-rounded opponent, a victory could make a massive statement for the Patriots.