Patriots: Stidham will be the starter, for now 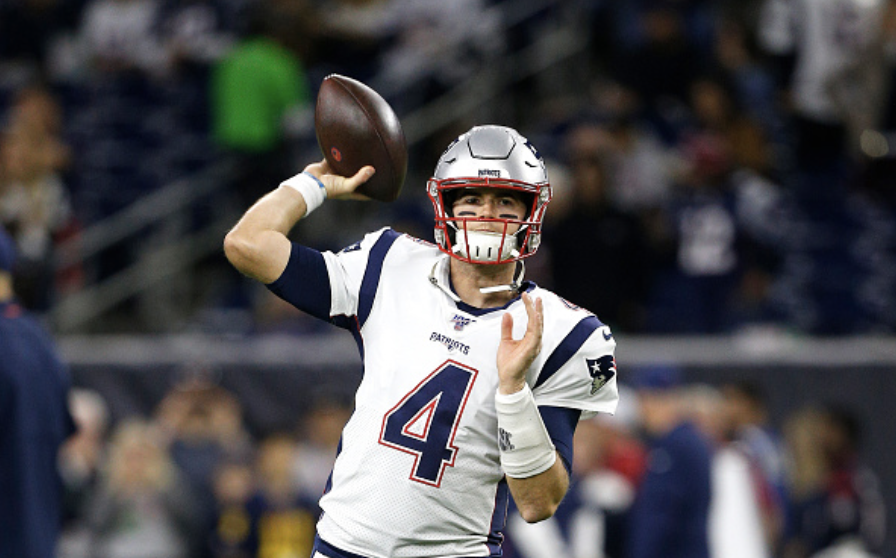 Jarrett Stidham is set to become the Patriots' starting quarterback

With quarterback Tom Brady heading to Tampa Bay next season, New England Patriots fans are anxious to know who will start week one. The Patriots are without a franchise quarterback for the first time since 1994. Although the team still has plenty of options to fill the role, the Patriots are under substantial pressure to find the ideal candidate for Brady’s replacement.

Not many moves for the quarterback position have been made across the league this offseason, leaving many big-name players still on the market, including quarterbacks Cam Newton and Jameis Winston. However, head coach Bill Belichick has expressed zero interest in signing them. Signing a well-known quarterback would diminish the team’s ability to fill the void at the wide receiver, tight end, and linebacker positions.

The Patriots have two remaining quarterbacks on their roster: Jarrett Stidham and Brian Hoyer. Both players offer interesting strengths and weaknesses for the team.

For the third time in Hoyer’s career, he signed with the Patriots on March 22 on a one year, $1.05 million dollar deal. Hoyer previously played five seasons for the team and served as Brady’s backup during the Patriots’ Super Bowl run in 2018. Because of his history with the team, Hoyer is very familiar with the Patriots’ offensive scheme.

Hoyer does not boast impressive statistics through his time with the Patriots or as a member of other franchises. Throughout his 10 year career, he played in 68 games, threw for 10,274 yards, 52 touchdowns and 34 interceptions. Hoyer is also not very familiar with the Patriots’ current receiving core, and a lack of chemistry and communication between Brady and his receivers became a major issue last season.

With Brady out of the picture, this creates an ideal scenario for Stidham to make an impression on Patriots fans. His rookie season proved to be lackluster, with his first career pass ending in a pick-six. Stidham still has a lot to prove.

Stidham also has experience with the Patriots’ current offensive scheme. He had the chance to develop chemistry with the young receivers during practice and can continue to develop following his rookie season.

Belichick and offensive coordinator Josh McDaniels now have the opportunity to shape Stidham into the quarterback the team needs. Belichick’s recent stints with young quarterbacks have proven to be relatively successful. He helped shape quarterback Jimmy Garoppolo, who led the San Francisco 49ers to the Super Bowl this past season, and quarterback Jacoby Brissett, who stepped up for the Indianapolis Colts through Andrew Luck’s various injuries and retirement.

On top of these two intriguing options for starting quarterback, the Patriots have 12 draft picks in the 2020 NFL draft. Notably, the team holds the 23rd overall pick and three picks in the third round. These draft picks present an excellent opportunity for the Patriots to select a suitable quarterback to compete with Stidham and Hoyer for the job. Some names being thrown around include quarterbacks Jordan Love, Anthony Gordon and Tua Tagovailoa.

Many mock NFL Drafts predict the Patriots will draft Love with the 23rd pick. However, Love ended his junior season at Utah State University with 17 interceptions. Belichick is known for having a  low-tolerance for mistakes, especially regarding turnovers, and Love’s high frequency with interceptions could be a turn-off for the Patriots coaching staff.

Gordon recorded 5,579 passing yards in 2019, the second-highest passing yardage in college football, and threw for 48 touchdowns. He also recorded 16 interceptions.

Tagovailoa is a bit of a long shot, with the team possibly needing to make a trade in order to draft him.Tagovailoa also missed part of his final season at the University of Alabama with a hip injury in November 2019. Significant injuries like this always pose the question of whether the player will be the same after recovery.

With all of these potential quarterback options on the plate, there is one option that makes the most sense. While Patriots fans might feel reluctant to support Stidham as the starting quarterback week one, it might be the reality when September rolls around.

Stidham beat Hoyer last season to be Brady’s backup, so the coaching staff certainly sees something in him. After all, the vast majority of Patriots Nation held little faith in Brady in his second year when he took over for injured quarterback Drew Bledsoe in 2001. Stidham has not received his chance to show Patriots fans what he can do. With Belichick and McDaniels around to guide Stidham through offseason practices, he could potentially prove his doubters wrong.