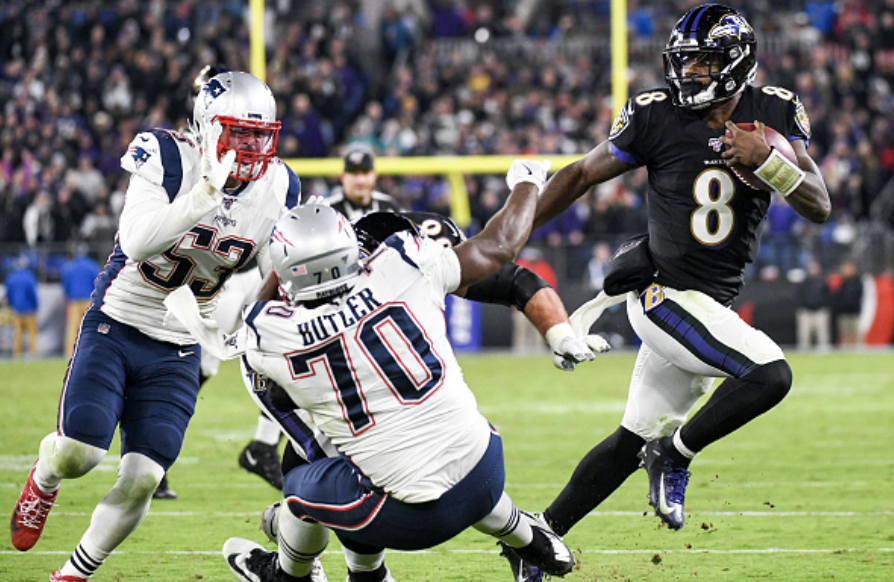 The New England Patriots did not look like themselves in their 37-20 loss to the Baltimore Ravens on Sunday night. With their weaknesses exposed, the Patriots enter their bye week with an opportunity to bounce back.

The Patriots, previously ranked as the fourth overall rushing defense in the league, gave up a season-high 210 yards rushing to the Ravens. The Ravens established the perfect rushing strategy against the Patriots, consistently confusing their defensive line and linebackers with fake handoffs to running backs. This left plenty of space for Ravens’ quarterback Lamar Jackson to rush for first downs.

Though the Ravens relied more on their running game, their passing attack challenged the Patriots’ secondary. The Ravens implemented a variety of crossing routes into their offense, which created confusion for the Patriots’ cornerbacks, who mainly defend with man-coverage. Jackson completed 17 of 23 pass attempts for 163 yards and one touchdown, making this the only game without a Patriots interception.

Quarterback Tom Brady helped the Patriots get into an offensive rhythm multiple times throughout the game. Brady led the team down the field consistently, mostly completing passes to wide receivers Julian Edelman and Mohammed Sanu. However, turnovers and penalties prevented them from getting back in the game. The Patriots drew seven flags for 48 yards and gave up four first downs to the Ravens due to penalties.

The offensive line failed to give Brady sufficient protection once again, allowing two sacks and 10 quarterback hits. Brady received little to no time to find an open receiver and frequently threw the ball away. He committed his league-high fourth intentional grounding penalty for the third straight game. With the Patriots playing from behind, Brady tried to force big plays and shift the momentum. One of these attempts ended in an interception by Ravens cornerback Earl Thomas III and allowed the Ravens to extend their lead.

Falling to a talented team right before a bye week is the best time to lose. Though the Patriots are no longer undefeated, the loss pushed them out of their comfort zone. Undefeated teams often become comfortable until they reach important moments, and the 2007 Patriots are a perfect example of this. The team needs this time to reflect on the loss and evaluate where they stand heading into a difficult stretch of games.

After their loss, dozens of articles were released with various criticisms of the Patriots. The team faced this situation numerous times in the past, including their 41-14 loss to the Kansas City Chiefs in September 2014. This situation sparked the infamous “We’re on to Cincinnati” press conference with Belichick, which perfectly encapsulated the Patriots’ mindset after a loss.

The Patriots feed off of criticism—and Brady said it motivates him more than success. The Patriots often bounce back with a statement victory after a difficult loss. After their blowout loss to the Chiefs in 2014, the Patriots shocked the 3-0 Cincinnati Bengals with a 43-17 victory. Criticism and challenges fuel the Patriots to perform at their peak and prove the critics wrong.