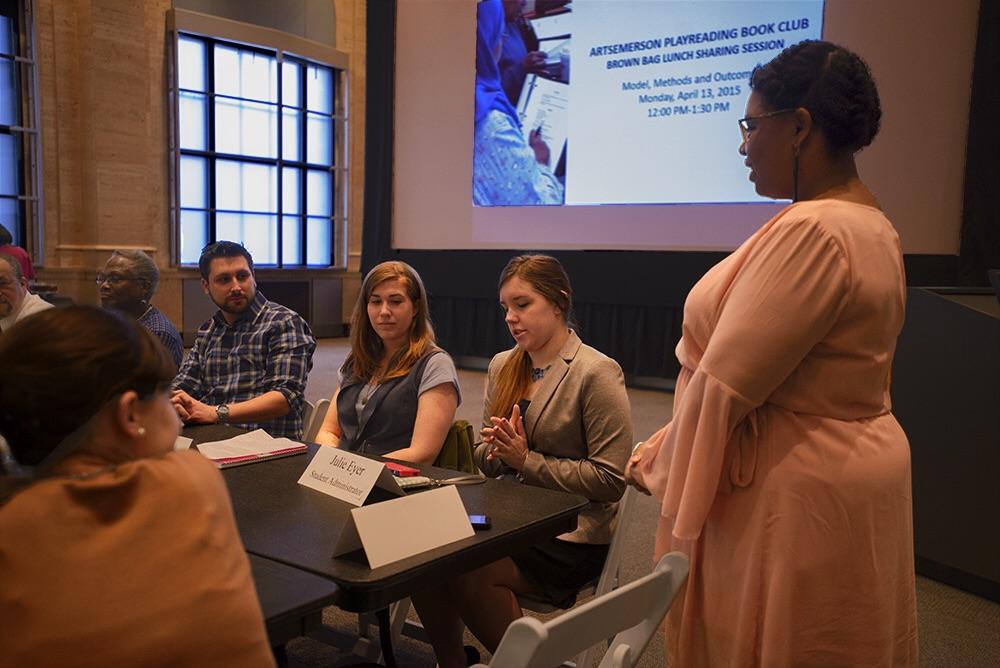 An air of camaraderie was palpable in the Bill Bordy Theater as members of the Play Reading Book Club met on April 13 to have lunch and discuss the program. The informal occasion had a strange yet heartwarming atmosphere as fairly new acquaintances greeted each other like old friends. Before the event had even begun, threads of conversation had already taken off on art, fond memories, and what they had all brought for lunch.

Members of Boston’s theater community came together with Boston’s Play Reading Book Club, or PRBC, to discuss the group’s ongoing play-reading series over a brown-bag lunch. The goal of PRBC, which was founded by ArtsEmerson, is to revitalize Boston residents’ interest in the performing arts.

“[The PRBC] is a theater literacy program,” Akiba Abaka, the ArtsEmerson audience development manager, said in her presentation. “It creates a space where audiences can read, study, learn, and experience the theater together. It also creates an environment for building community and fosters cultural bridging in human conversation.”

PRBC is held in the Boston Public Library’s Roxbury branch on Saturday afternoons. Each of their plays has had six accompanying meetings. Members spend four sessions reading and discussing the play, and divvy up the roles. The participants then meet up to watch a professional production of the play, and during their last session, put on a production of the play at the Roxbury branch.

A grassroots campaign, PRBC’s recruitment strategy is based almost solely on word-of-mouth. Abaka said PRBC consistently recruited new members with each of this season’s plays, accruing 36 members total and averaging 25 attendees per meeting, and hopes to expand to other library branches next year.

The event on April 13 focused on PRBC’s successes and challenges in its flagship season. A discussion, moderated by Abaka, featured a panel of ArtsEmerson affiliates, book club members, and others involved in the program.

PRBC receives money through a grant by the Fellowes Athenaeum Trust Fund, administered by the Boston Public Library and dedicated to financing projects in the arts that benefit the greater Boston community. The Trust Fund was represented on the event’s panel by Candelaria Sliva. Silva said she would often drop by the Roxbury branch on Saturdays and stay for hours despite her busy schedule, enthralled with the success of the program.

“I found that the program revitalized my drive to push theater like drug-pushers push drugs,” Silva said.

The PRBC sessions are led by Teaching Artists, graduate students in Emerson’s theater program who each supervise one of the plays in the series. Panel member Charles Jabour, the Teaching Artist who oversaw the PRBC’s fourth production, Ulysses on Bottles, emphasized the importance of creating a safe, non-judgmental space for discussion during the meetings.

“I saw it as my role as facilitator to bring the multiple narratives that we’re often hearing and that are oftentimes conflicting, to present them all,” said Jabour, “and to create an environment where there could be a discourse on those issues without the fear of judgment.”

The plays that the PRBC has read this season are The Trip to the Bountiful by Horton Foote, Breath and Imagination by Daniel Beaty, Tristan and Yseult by the Kneehigh theater company, and Ulysses on Bottles by Gilad Evron. All of the plays were productions in this season of ArtsEmerson.

After the slideshow, participants in the program shared their stories of personal growth and learning over the course of the program and asked panel members questions. One gripe with PRBC that came out in discussion was the lack of young adult participants. No undergraduate Emerson students are members of the book club, and none attended the event.

“We did want to do outreach with the young people,” Abaka said. “But one of the barriers we faced when reaching out [was] they were interested, they just didn’t have time. The kids, they have stuff to do; they don’t want to hang out with us.”

Panelist Julie Eyer, the student administrator at ArtsEmerson, said she believes that while the program should welcome any who wish to join, theater outreach overall is already disproportionately focused on youth demographics.

“I’m a very firm believer that theater is for everyone,” said Eyer. “There is, a lot of times, a gap for adult education, and so seeing this opportunity to literally bring the play to the people in the community and allow them to experience it, learn from it, and grow from it was so beautiful to me.”

Panelist Richard McLaughlin said his lifelong love of theater and performance art had begun to wane as a busy schedule and opportunities for creative outlets dwindled—a sentiment that many attendees echoed. When he joined PRBC, however, he said he found a way to enjoy all aspects of theater on his Saturday afternoons in reading, discussing, and watching plays.

“There’s nothing like live theater, like being in front of a group of people,” said McLaughlin. “Theater broadens your mind; it draws you in.”