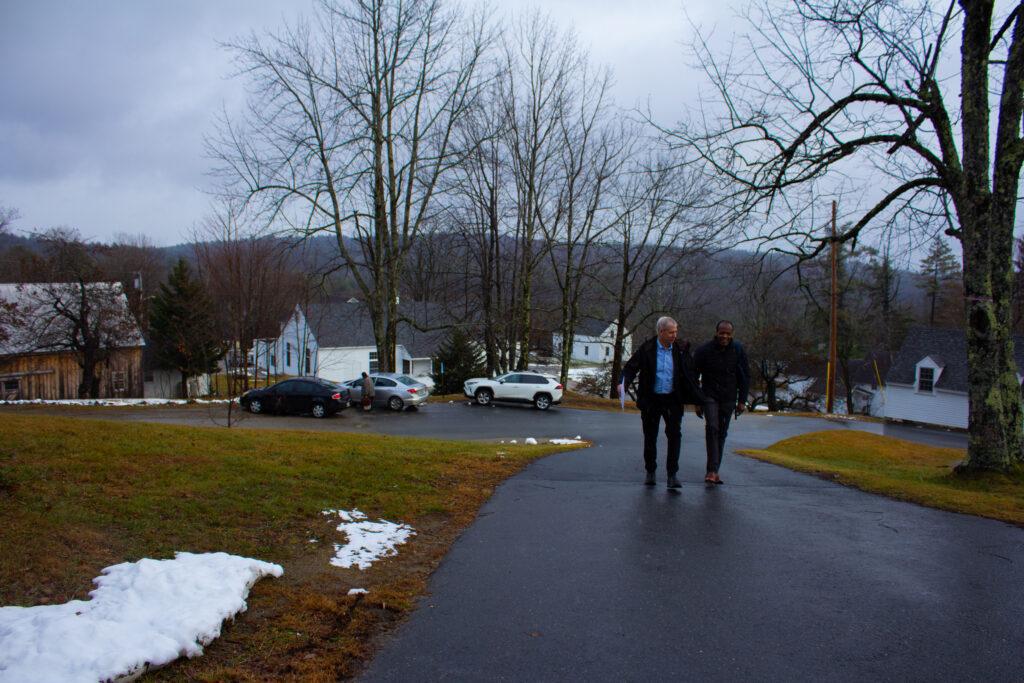 MARLBORO, Vt.—President M. Lee Pelton spoke about the future of Marlboro College’s campus and the cultural similarities between the two institutions Wednesday during his visit to the Vermont campus.

Marlboro senior Adam Weinberg asked Pelton about his plans for the future of the Marlboro campus.

Pelton said he is aware of outside offers to purchase Marlboro’s land, but said neither college’s president would make a decision about the future of the campus by themselves.

“I know that the state of Vermont and the community has some interest in the future of this campus,” Pelton said. “And all I can say right now is that we are aware of that, and that all of those perspectives and points of view will be taken into consideration as the campus is developed, and it’s my hope … to keep the campus open and alive and vibrant in some way.”

After the meeting, Weinberg said Pelton’s answer was sufficient for him.

“I think that he answered my question [about the campus] in the sense that it’s not a closed-door thing,” Weinberg said. “I think a lot of people in the Marlboro community are feeling like, ‘Oh my God, the sky is falling, it’s a done deal.’ It kind of is, but also kind of isn’t.”

Pelton addressed some criticism he has received since the merger announcement.

“Sometimes there’s an elephant in the room—I think there are two elephants in the room right now—and I want to address them,” Pelton said. “One is the question of, ‘Well, Lee, why did you describe this as a gift?’ I really struggled with how to describe this transaction, not only among us, but to broader audiences. And I felt that ‘acquisition’ was not only wrong-headed, it just wouldn’t describe this alliance that we seek to establish.”

Pelton also said he believed the merger was more than a college acquisition.

“For me, I believe that this transaction is much more than financial—it’s an alliance,” he said. “It’s an intellectual alliance, a cultural alliance, of two communities that share many common values.”

The Emerson president expressed a willingness to work collaboratively with Marlboro faculty and students to ease the transition for members of the community wishing to come to Emerson.

Pelton then addressed an article where he was quoted saying that Marlboro College is closing.

“I recognize now what I should have said is that the campus is closing, not the college,” he said. “Marlboro is a magical place, it is a national treasure—I believe that—and I feel humbled and grateful for the opportunity to participate in its future.”

Pelton said there would be physical space for the Marlboro community on Emerson’s campus to honor their campus.

Once Town Meeting ended, members of the Emerson administration took a tour of the Marlboro campus, accompanied by Marlboro President Kevin Quigley.

After the tour, Pelton and Hoppe held a roundtable discussion in the Marlboro Library to answer student questions.

Topics in the discussion ranged from fraternity and sorority life on Emerson’s campus, to study abroad opportunities for Marlboro students, and to the major transfer process.

Quigley said during the round table that, while he was hopeful for future collaboration with Emerson, the likelihood of the Marlboro campus remaining open is slim.

“I don’t want to mislead anyone in saying that Marlboro will continue here on the hill after July 1,” Quigley said. “Obviously for us, that’s the preferred option, but that is probably not the most credible option—[but] we want this to work for [students].”

In the discussion, Pelton confirmed that the $30 million endowment from Marlboro would go directly into the soon-to-be-renamed Marlboro Institute of Liberal Arts & Interdisciplinary Studies.

Pelton did not have an answer when The Beacon asked him about the ability of Marlboro students to study abroad while maintaining their discounted tuition.

Junior and Head Selectperson Charlie Hickman said in an interview with The Beacon that they were pleased by Pelton’s Town Meeting speech, but that there’s still work to be done.

“[Town Meeting] went better than I was expecting,” Hickman said. “[Pelton] is a good speaker and I think that he was correct in addressing the two elephants in the room because there were many hurt feelings around those comments, but I don’t think that it has solved or ameliorated those feelings completely.”

Hickman also said they think students at Town Meeting needed to voice their concern and discontent rather than ask questions.

“I think that maybe there are less questions and people just want to be able to say that they’re pissed about what has been said about this,” Hickman said. “The kind of information that has been put out is not representing this agreement in a light that feels authentic to Marlboro students. And while there was an allusion to that in Town Meeting today, it didn’t scratch the itch like we needed it to.”

Hickman said the current climate on the Marlboro campus makes it hard for students to ask questions.

“It’s also such a difficult time to ask questions because there are no good answers right now, and I know a lot of students have so many feelings of anger and dissatisfaction,” Hickman said. “I think in Town Meeting a lot of people were looking to voice those feelings to [Pelton] in this public space. And that didn’t quite happen.”