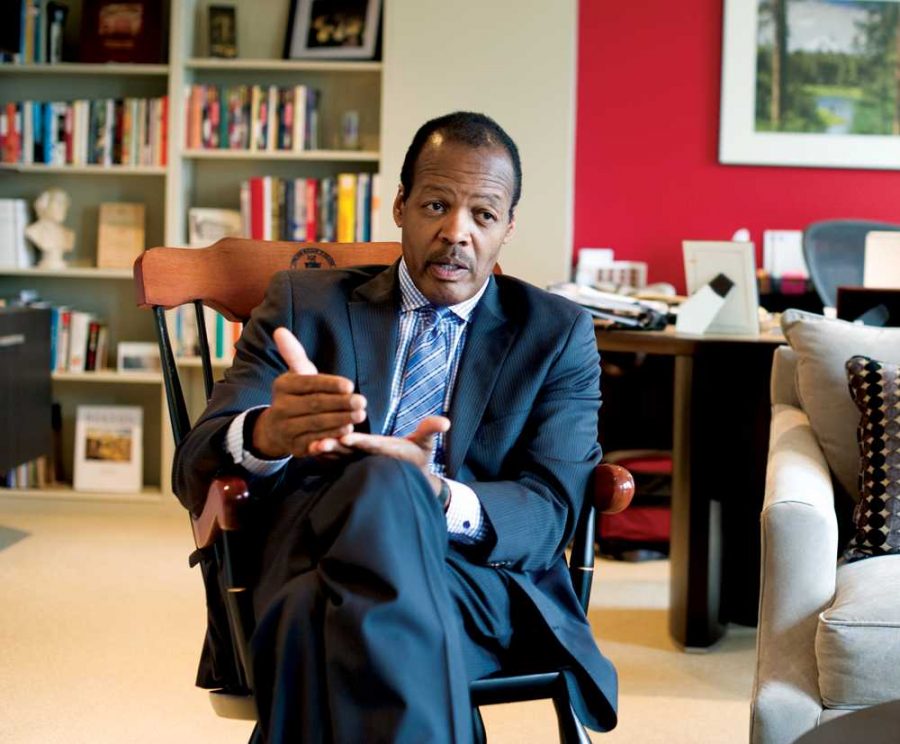 The parade, which received a permit from the city of Boston in June, coincides with move-in day for returning students. Vice President and Dean of Campus Life James Hoppe sent a community email several hours after Pelton’s containing safety procedures for Saturday, including locking all exterior college doors, designating an Emerson College Police patrol, and prohibiting guests from entering any college buildings.

Pelton opened his email to the college community with a strong rebuke of the ideology found on the Straight Pride Parade’s website, Super Happy Fun America.

“Fear and ignorance, humanity’s most potent cocktail, masquerading as freedom of speech, have been given permission (i.e. given a license) to hold a Straight Pride Parade on August 31st, which, barring the Boston Police determination that doing so would be unsafe, will march by our campus – an affront to the wonderfully pied beauty of our affirming and diverse commonwealth of learning,” Pelton wrote.

Super Happy Fun America spokesperson Samson Racioppi said members of the organization were extremely disappointed by Pelton’s comments and added that the parade is bringing up serious issues.

“We believe that they’re heterophobic in nature and that free speech and the free expression of ideas on college campuses is dead, at least at Emerson College,” Racioppi said in a phone interview with the Beacon. “The fact that he called us ignorant and compared our movement to things like white pride shows the president is indeed ignorant as to the nature of our movement.”

Racioppi said the organization has made no attempt to contact officials at Emerson and the college has not reached out to Super Happy Fun America. Racioppi called on Pelton to retract his comments and issue a full apology.

“I have nothing against Emerson College or any of the other colleges in the Boston area. I can’t imagine why it would be in the scope of our organization to have to talk to every single business, college, organization on our parade route,” Racioppi said. “That just seems ridiculous to me.”

“The Grand Pooh-Bah of Spectacles, the pitiful Milo Yiannopoulos, who will do just about anything to get attention,” Pelton wrote.

Pelton added that the ideological motivation of the parade reflects a wider national trend of ignorance and hate.

“The Straight Pride Parade is a perversion,” he wrote. “It is a desecration of beauty, truth, and generosity and that is why we must call it out, call it what is, with a loud, clear, unambiguous and unified voice.”

The Boston parade, if approved by the BPD, would follow a rally held by the National Straight Pride Coalition on Aug. 24 in Modesto, California outside of a Planned Parenthood. The event drew roughly 200 counter-protesters that outnumbered the rally’s attendees.

Several Facebook events designed to counter-protest the Straight Pride Parade have received over 700 RSVPs from people marked as “Going” or “Interested.”

Racioppi said he is not worried about counter-protesters and has full faith that Boston police will keep opposing crowds separated.

“What we are worried about is the police told us yesterday that even though we have a permitted event and we have the lawful right to own that public space between Copley and City hall, they’re not going to clear protesters and they’re not going to make arrests for people who try to obstruct our path,” Racioppi said.

A Boston Police spokesperson said the department is not in a position to comment on Racioppi’s remarks and a statement from the police department will be issued prior to the parade.

Updated 8/28: The article has been updated to include statements from Vice President and Dean of Campus Life James Hoppe and Super Happy Fun America Spokesperson Samson Racioppi.