Pelton examines pandemic, ‘flex’ learning, and the future in annual State of the College address 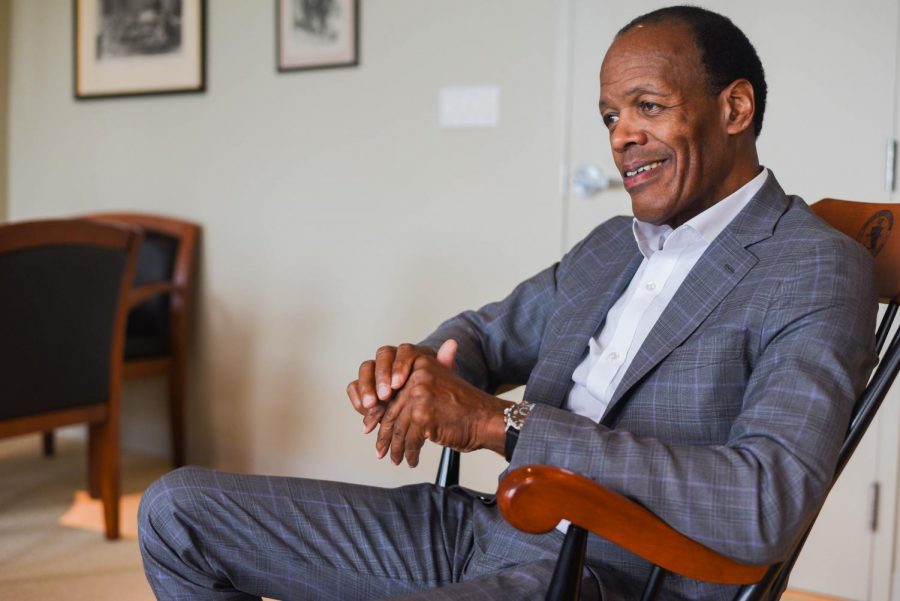 Amid a spiraling pandemic that Emerson administrators once warned may financially devastate the college, President M. Lee Pelton released his annual State of the College address Friday, praising the college’s COVID-19 response, a successful fiscal year, and a projected increase in enrollment.

The address, centered around Emerson’s response to the coronavirus, painted a positive picture of the college through the pandemic. Pelton focused on the shift to online learning in spring 2019 and the subsequent hybrid “Flex” class model developed for fall 2020.

He had a positive fiscal outlook for the college after the shift to online learning in his address. Pelton mentioned the college’s cost-saving measures including a hiring freeze on new faculty and an early retirement initiative among senior administration officials.

The college initially predicted between $33 and 76 million in losses should students return to campus, and up to $100 million should the college continue instruction entirely online.

Pelton thanked faculty and staff for their participation in early retirement programs and hiring freezes to prevent potential layoffs caused by the pandemic.

“Our financial approach and the commitment of faculty and staff saved jobs,” Pelton wrote.

Unlike other Boston schools such as Boston University, Emerson did not lay off any faculty this semester. The college only promised not to lay off employees in the fall, leaving faculty and staff worried for their jobs in spring.

Pelton also touted the college’s increase in enrollment, saying that this year’s influx of new students numbers reached a record high, with 1,805 new students—80 more than last year. These new students come from a variety of backgrounds including new undergraduate and graduate students, transfer students, and students from Marlboro College, he wrote.

Pelton mentioned that the overwhelming majority of students returned to campus to participate in the “Flex” learning model, with only 18 percent of the undergraduate student body choosing to continue learning remotely.

At another point in the address, Pelton touched on the Marlboro merger, acknowledging the community from Potash Hill.

“As we move forward, we will continue to weave the Marlboro legacy into the fabric of our College,” he  wrote

Pelton mentioned in the address that the merger brought the college about $22 million overall to support the Marlboro Institute for Liberal Arts. The completed merger did not bring in as much money as initially projected, with the $10 million campus being sold for only $225,000.

Additionally, Pelton discussed online accommodations the college made for faculty and students who preferred to stay away from the Boston campus in Fall.

“This past year, we were called upon to reinvent courses and programs to be not only safe in the face of the global pandemic, but to reimagine them in a way that did not diminish the quality of education for which we are known,” Pelton wrote. “I am enormously grateful to our faculty for their inventiveness, creativity, collaboration, and leadership, and to the many staff members who worked around the clock for months on end to bring us to this point.”

Towards the end of the address, Pelton discussed systemic racism and urged students not to grow complacent about racism amid a nationwide reckoning on race.

“I urge us all to take actions to avoid backsliding on equity during this COVID era,” Pelton wrote “We should listen intently. We should hold ourselves to the highest standards of accountability. We should self-consciously stretch and extend our campus boundaries to engage the larger society, for we know that the nation looks to colleges and universities to solve its most pressing problems. It is work we must undertake together.”

Pelton wrote a letter to the community in May detailing his experiences with racism as a Black man in America.

Last year, President Pelton focused his state of the college on Emerson’s expansion, including 23 new global pathways programs and the merger with Marlboro College.