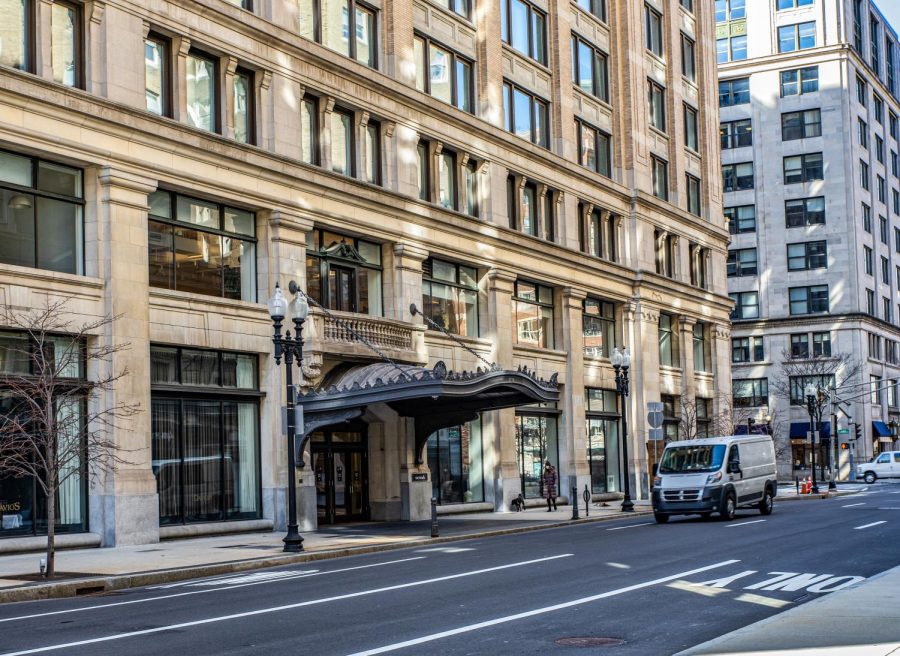 75 Arlington St, the Building where the Boston Foundation office is located in.

After Emerson President M. Lee Pelton steps into his new role as CEO and President of The Boston Foundation on June 1, he will be tasked with setting new priorities for the organization, managing its $1.5 billion budget, and serving as a liaison between donors and nonprofits.

Established in 1919, The Boston Foundation works as “Boston’s largest grant maker,” providing grants to nonprofit organizations in the greater Boston area through their endowment fund. The foundation also works  to create “donor advised funds”— funds invested into donor-created charitable funds and dispersed over time. Among its other duties, the foundation acts as a civic and research innovation hub to develop solutions for issues facing the greater Boston community.

“The job has changed a lot because the organization has changed a lot, mostly for the better,” current President Paul Grogan said. “It’s like a bank for community improvement. Much of our money is supplied by donors [who] wish to do their charitable work in conjunction with the foundation. We’re able to assist generous donors, putting their money in the right place, identifying programs for them to fund, and so forth.”

Grogan, who led the Foundation for 20 years, said the President must manage relationships both with the board of directors and nonprofit organizations across the country and internationally—though most grants go to nonprofits in Boston and Massachusetts. The president is also responsible for hosting and organizing fundraisers, as well as determining the foundation’s priorities alongside the Board.

“Our goal is to work with all the major stakeholders in Boston to focus on the major challenges and opportunities facing our city,” Linda Mason, chair of the foundation’s board of directors, said. “That would be community leaders, the universities, the business community, the government, other foundations, [and] donors. We represent the city in its entirety [and] serve the city in its entirety.”

The organizations supported by the foundation typically align with one or more of the foundation’s “five impact areas,”—arts and culture, education, health and wellness, neighborhoods and housing, and jobs and economic development, according to their website. Nonprofits can also apply for “open door grants”—which envelops nonprofits that don’t fall under the impact area—or directly through donors-established funds. In the 2020 fiscal year, the foundation and its donors made approximately 12,000 grants, totalling to more than $215 million, according to Ted McEnroe, senior director of communications and digital media.

The job of the president has changed as the foundation expanded. He said the most significant shift has been the financial responsibilities of the position. Grogan said it was time to leave the foundation and allow a new leader to develop a fresh vision.

“Fresh blood and a fresh pair of eyes are needed in most institutions periodically,” Grogan said. “It’s a very demanding job and it’s relentless… I feel like I’ve had my experience with that and I think it went very well, and [now it’s] time to do something different.”

Grogan said Pelton could expect a steep learning curve after his induction into the foundation following commencement.

“Part of it is just a whirlwind that takes place as he gets into the job,” Grogan said. “Given the relationships that have to be built, the number of people who will want to be meeting with him and talking with him, there’ll be a lot of pressure.”

Pelton will be taking the helm as the 10-year priorities for the foundation are being set.

”It will be a real opportunity for him to put his stamp on the foundation and its activities and his priorities,” Grogan said. “He’ll have a lot of flexibility to do that.”

When searching for Grogan’s successor following his resignation in January, J. Keith Motley, chair of the presidential search committee at The Boston Foundation said they sought an experienced leader engaged in all sectors of the community.

“The goal was… to find someone who has a proven track record of excellence, but also someone with a proven record of being able to get other people to participate in this work,” he said.

Pelton checked “most of the boxes” for the foundation, serving as the Board of Directors Vice Chair for the Boston Chamber of Commerce, the Chair of the Boston Arts Academy Foundation Board, a member of the WGBH Board of Trustees, and a Trustee at the Barr Foundation.

“He’s worked hard to make Emerson an incredible institution,” Motley said. “He’s also been engaged in the Boston community in a very complete way… He has an understanding of Boston, Massachusetts in its politics, but he also has relationships which are key to a role like this. He also has experience as a leader.”

In November 2019, Pelton was one of the guest speakers at TBF’s Annual Campaign for Civic Leadership. The next month, TBF gave a $20,000 grant to Emerson to support the Emerson Prison Initiative.

Grogan said he wished his best to the incoming president, advising Pelton to be adventurous with his new role and to ensure the foundation’s finances, resources, and good reputation remain intact.

“He is so talented I expect him to have a lot of a lot of impact in a lot of different ways,” Grogan said. “We have a lot of big issues that require a lot of thought and effort, and we need institutions, like the Boston Foundation, to really step up and take on the tough issues.”