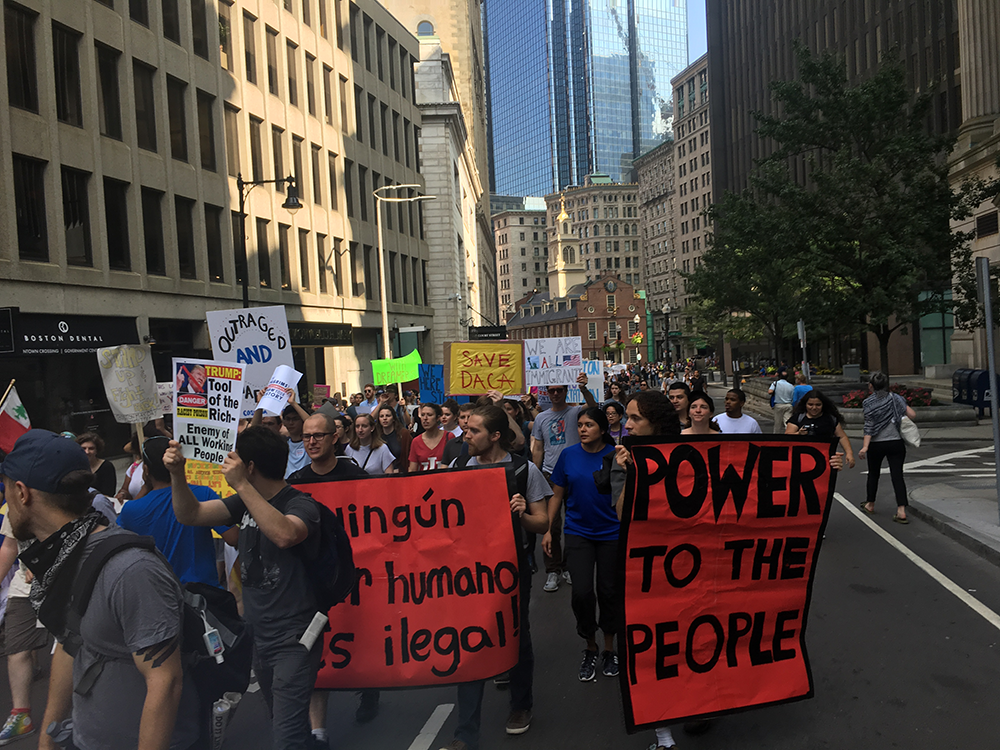 President M. Lee Pelton is pledging that the college will continue to support and protect undocumented students, regardless of the future of the Deferred Action for Childhood Arrivals policy.

Earlier this month, Attorney General Jeff Sessions announced the program, which protects these students from deportation, will be terminated. President Donald J. Trump’s perspective on the policy remains unclear.

In an interview with the Beacon, Pelton said DACA students will continue to receive financial aid and access to external legal counsel.

“We’re going to continue to work with other schools and university to ensure that DACA is extended,” he said.

The college will continue its policy of refusing to willingly comply with U.S. Immigration and Customs Enforcement and extending the city of Boston’s protection policies for undocumented students, he said.

Pelton also said the college designated an on-campus staff member to reach out to DACA students.

“We will maintain our commitment,” he said. “These are our students. We want them here and we’re going to do everything that we can do to keep them here.”

Ilina Ghosh, member of Understanding National Immigration Through Education (UNITE), said the organization’s goal is to make sure Pelton follows through on his statement and to continue to educate the community on the issue of immigration.

The junior said undocumented students should be supported and made to feel like they’re a part of the community. She said it’s important to create a space where undocumented individuals feel they belong.

“A lot of students coming [to Emerson] undocumented have worked really hard just to get to higher education but now they don’t even know if they can get jobs in this country,” Ghosh said.

Ghosh said she recommends students who want to educate themselves on the issue to volunteer for long-term programs related to immigration, like Alternative Spring Break. Ghosh said she also thinks the college should hold more events on the subject to continue to provide information to the community.

“It’s about not letting being undocumented have to be your first and foremost identity,” she said. “The best way those barriers are broken is through education. Once you are able to understand the situation, it allows you to have perspective and empathy.”

Freshman Anthony Rodriguez attended the DACA rally on Boston Common on Saturday and said he saw many familiar faces.

“I’m not a part of DACA but I do know people who have DACA status,” Rodriguez said. “And even though they don’t [go to Emerson] just knowing that this place is somewhere they could possibly come because we won’t let anything happen to them is reassuring.”

Vice President for Diversity and Inclusion Sylvia Spears said the office is ensuring that DACA students have access to information about their rights, as well as legal and community based advocacy resources.

Spears said advocating for these students should be the moral imperative at Emerson and colleges around the country.

“Undocumented students applied like everybody else, were accepted, and are thriving here,” Spears said. “Why should we accept that they reap the consequences of something they have no control over?”

Spears and Pelton both said they urge students to write their congresspeople and urge them to find a solution to the uncertainty DACA students are facing.

“The more voices and the more pressure that is put on those congress folks, the more they realize there will be consequences for them should they not choose to think of something to support these students,” Spears said. “The power of vote is real.”

Stephanie Purifoy contributed to this report.