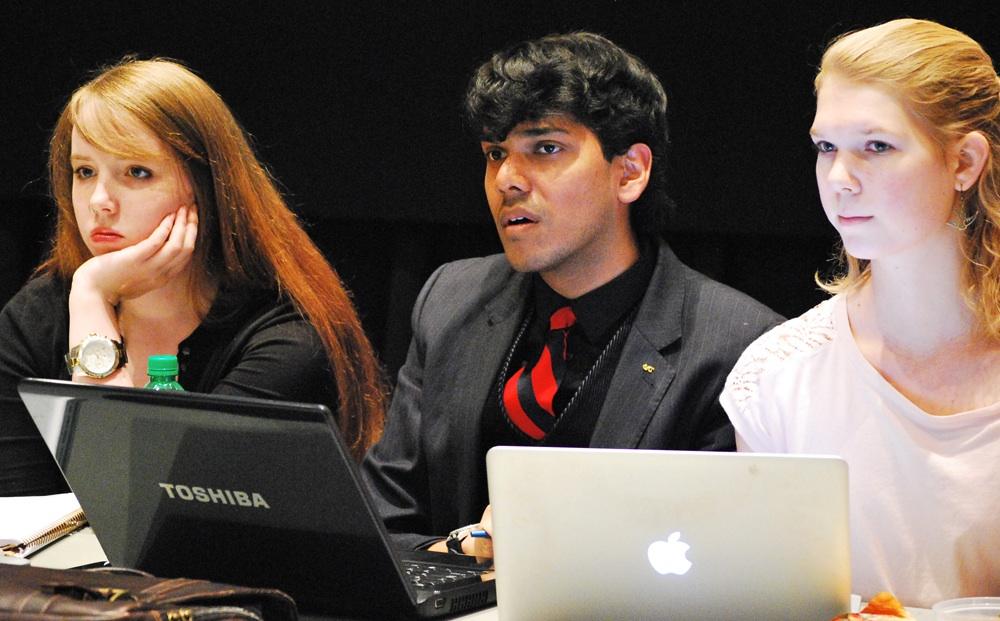 Student leaders and administration officials sat at opposite ends of a long, rectangular table in the Bill Bordy Theatre Tuesday afternoon as tensions rose during an hour-long discussion on college finances.

Two members of the board of trustees joined a visibly flustered President M. Lee Pelton—who said he anticipated a casual, closed conference with Student Government Association officials—for a meeting addressing the SGA’s concerns with tuition hikes and college expenditures.

Pelton briskly entered the room and, after observing the arrangement of the theater, quickly apologized to trustees Larry Rasky and Marillyn Zacharis for the set-up of the meeting.

“I was hoping for a more informal discussion,” Pelton said to the room. “It’s hard to have a good conversation under these circumstances.”

After SGA members received what they said was a lukewarm reply from the trustees in response to a letter recommending the college review a tuition freeze policy, student government officials drafted questions for the board members regarding the college’s finances.

Tau Zaman, the SGA’s president, apologized for the large space, and tried to open the meeting by going around the long table, where the entire 26-member SGA sat, and introducing each official.

Waving his hands dismissively, Pelton insisted that they did not have time for introductions, and asked that they begin going through the questions, which were previously sent to the president and the trustees.

The one-and-a-half page document, written by the SGA in preparation for the meeting, questioned plans for specific properties the college owns, such as Sweetwater Tavern and others in the Boylston Place alley. It also called for an explanation on the process of determining a tuition increase.

The first question posed by Zaman asked for the board to publicize a statement “explicitly outlining their mission regarding the direction of the college.”

Pelton responded by referencing the strategic plan, accessible on the Emerson website, created by college officials last May.

“To say something by way of preference, the best strategic plans don’t have a timeline,” Pelton said. “For a plan to be useful, it should be organic and ongoing.”

Zaman then asked about how the college prioritizes its major expenses and projects.

“That question was poorly worded. You’re really asking two questions,” Pelton said. “Any organization has a strategic plan that charts a course for the future. You’re asking about the annual operating budget and how that is determined, and that’s simply by fixed costs.”

Zaman defended his phrasing, saying all the questions for Pelton and the board members were carefully written.

“Maybe he didn’t know how much work went into the questions,” Zaman said in an interview. “He’s entitled to his opinion, he’s entitled to disagree and think that we didn’t word it well.”

Pelton said that this year has been the most inclusive budgeting process in the college’s history, starting in August and ending in May. It is the first year the budget received input from a college-wide committee featuring staff, faculty, and students.

“Because we just started this process, the committee did not meet until the spring term, but next year they will be involved all year,” said Pelton.

Pelton and Zacharis both responded to questions about a tuition freeze—effectively locking in a student’s tuition cost from freshman to senior year—would not be ideal and would force future students to absorb the financial burden.

“It’s a very complicated formula we go through,” said Zacharis. “We don’t want to price ourselves out.”

Toward the end of the meeting, both sides agreed they would like to open up new lines of communication. Rasky, however, acknowledged that members of the board do not always have the time to meet with students.

“We’re all trying to live lives too,” he said. “These are not things we wouldn’t want to do, it’s just that a lot of us are limited in the time that we have in terms of being away from own businesses. These suggestions are nice, but honestly a little challenging.”

Zaman said in an interview that the meeting was the first step in creating more open communication between the trustees and the students.

“We’re all trying to break in these new sneakers, and sometimes that’s uncomfortable,” said Zaman. “Part of healthy discourse is getting over that discomfort and finding out how to get into a regular rhythm with it, and I hope that happens soon.”