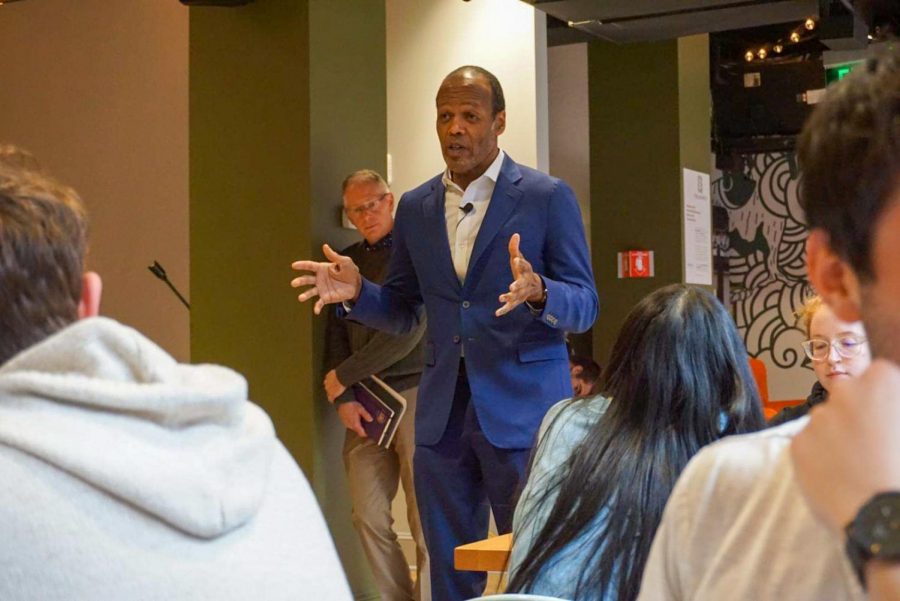 President M. Lee Pelton speaking to students who were forced to evacuate the Netherlands during the Spring 2020 semester after COVID-19 spread rapidly around the world. Pelton expressed support for the "Defund the Police" initiative Tuesday, saying that the police are overly militarized and the system needs overhauled, in a virtual panel with Commonwealth Magazine.

President M. Lee Pelton joined mounting numbers nationwide in voicing support for the “Defund the Police” initiative that calls for police department funding to be reallocated to community resources, in a Tuesday evening panel hosted by Commonwealth Magazine.

The panel, titled “The Pandemic and Police” was moderated by former Massachusetts Governor Deval Patrick  and focused on the Black Lives Matter movement, specifically in Boston, and its impact on the perception of race nationwide.

“We have to reconstruct law enforcement in this country… I’m supportive of defunding the police,”  Pelton said in the panel. “We’re obviously going to [need] the police, but we have to defund it and strip it of all its militarization which is so much a part of the culture now and… [potentially] redistribute that money to some structural issues.”

The “Defund the Police” initiative has gained nationwide traction in recent weeks following the police killing of George Floyd and an outpouring of support for the Black Lives Matter movement. The initiative calls for significant cuts to police department funding across the U.S. in order to invest more deeply in social programs and push some police duties to municipal departments and community groups.

Pelton also denounced the All Lives Matter movement, a foil for Black Lives Matter that is popular among right-wing groups and conservatives.

“The mayor’s declaration of racism as a public health issue is important because that kind of issuance also helps direct funding and directs policy [to help people of color in Boston],”  Panelist Dr. Myechia Minter-Jordan, CEO of The Dimock Center, said.

Pelton said he expects the Black Lives Matter movement to have a large presence on college campuses in the fall.

“Change requires a certain level of discomfort,” Pelton said. “As a college president, I’m going to be uncomfortable because I know a lot of these issues will come to my campus.”