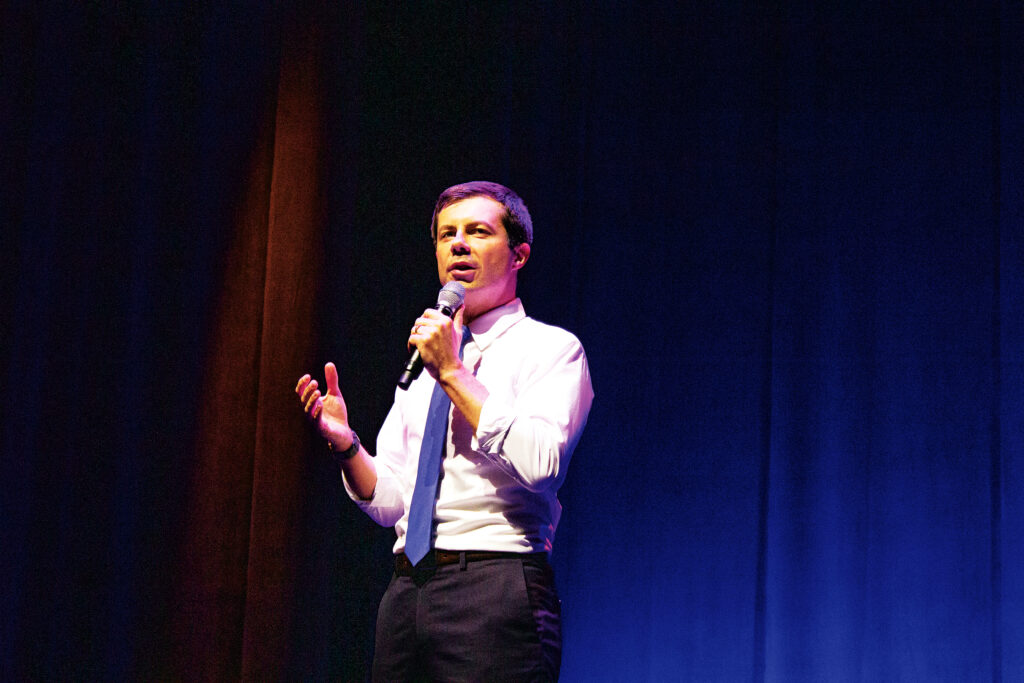 Pete Buttigieg spoke to supporters at the event about the shifted view of nationalism in America. Photo by Rachel Lo / Beacon Staff

Presidential candidate Pete Buttigieg asked voters to picture a morning when President Donald Trump is no longer in the Oval Office at a private event Tuesday in the Emerson Colonial Theatre.

“Picture, and I mean really picture, the first day when the sun comes up over the United States of America and Donald Trump is no longer in the Oval Office,” he said to the crowd. “I think we’re all ready for that day.”

The South Bend, Indiana mayor spoke to supporters at the event about the shifted view of nationalism in America and ticked through a series of key issues facing the nation, from climate change and infrastructure to Medicare and women’s rights.

The college sent an email to the student population informing of a private event that would draw a significant crowd on the same day of the event but failed to specify what the event was.

The mayor spoke about his health coverage plan—titled “Medicare for All Who Want It”—stating that citizens should have the right to choose a health system that works for them and not be put into a public one.

“It’s about the freedom to lead a life of your choosing—if we really want to deliver on freedom then, yes, it’s true sometimes that means getting government out of the way,” he said. “Getting government out of the business of telling women what their reproductive healthcare should be … And that is why the time has come to see to it that every American who wants it can get health coverage, Medicare for all who want it.”

The mayor brought state Rep. Maria Robinson to the stage to field audience questions. One person asked what the most pressing threat to the country is–the current president, or climate change.

“[Trump’s] presidency will end one way or the other … but climate change is picking up speed, and this is no longer a theoretical thing,” he said. “This is upon us and this is just the beginning, and we’re in the course of doing something about it.”

Buttigieg said he is still hoping to see a rise in young voter turnout but thinks gerrymandering has made them skeptical about the voting process.

“My message to young voters is that it will never change unless you step up and change it,” he said to press after the event. “The biggest changes in our politics and social history have been brought about by young people and the longer you’re planning to be here, the more you have at stake in decisions that are about to be made about your life.”

Buttigieg said he will reinforce Title IX policies, but failed to mention if he thought college students accused of sexual assault should have the right to cross-examine their accusers.

“I think it’s deeply problematic and, more broadly, we’re seeing a lot of attacks on Title IX enforcement right now,” he said. “It’s one of the reasons that we’ve focused on that as one of the elements in our plan for empowering women, and you also see this as a factor in how we’re approaching disability issues for students.”