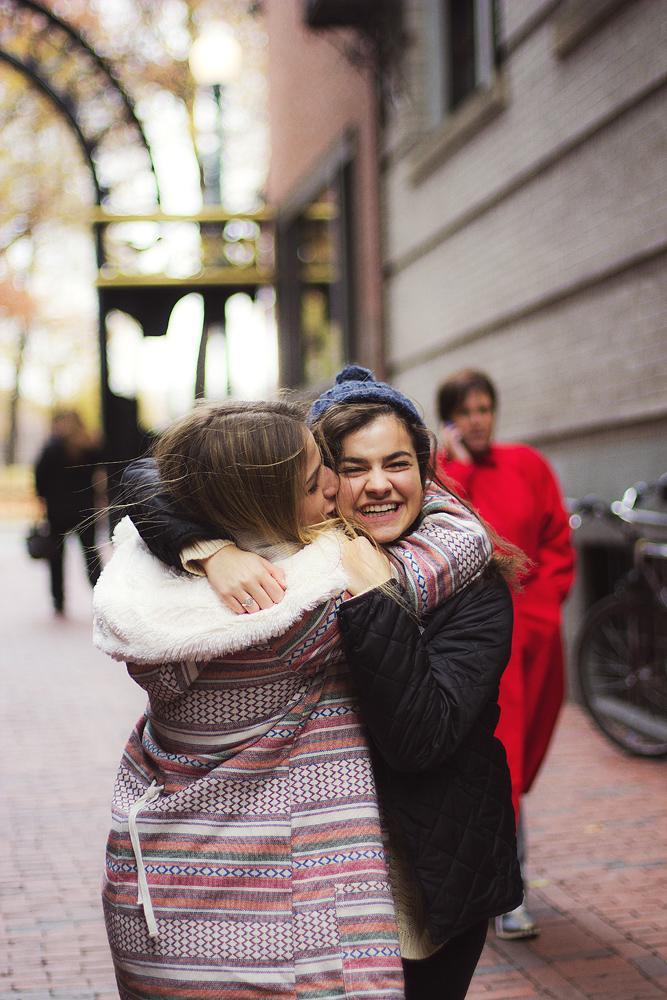 Boylston Street’s hustle and bustle is crawling with individuals eagerly rushing from classes to internships. Among the busyness, two students might emerge, requesting a picture and a brief interview to capture the creativity among the craziness. It’s all part of the new Facebook page, Humans of Emerson.

The page, created by Maya Rafie and Sara Menendez, is a spin-off of Humans of New York, a website comprised of photographs of the city’s inhabitants with mini biographies or engaging quotes.

“Emerson is so diverse and fun, so it’s the perfect place to launch something like this,” said Rafie, a freshman marketing communications major.

Rafie and Menendez said they created this project to capture students’ eccentricities and uniqueness.

“The main purpose of Humans of Emerson is to get to know each other,” said Menendez, a sophomore communication studies major. “People that we see in our day-to-day life but we don’t even notice.”

Menendez was Rafie’s orientation leader in Fall 2013, and Menendez said once they met, they instantly clicked and exchanged ideas.

They said the plans for Humans of Emerson began to arise in early October, and they quickly launched the project by the end of the month. Over 17 photos, including one that has over 100 ‘likes,’ have already been posted since Oct. 30.

Since the rapidly growing page already has over 750 followers, they said they plan on frequently updating it, with a goal of two photographs a day.

Menendez, who uses a Canon EOS Rebel Xsi, said that while a few photo shoots have been planned, the rest are on the spot.

“I’ve learned to always have my camera on me, because I never know who I’ll run into or what I’ll see,” she said.

They said they drew most of their inspiration for Humans of Emerson from Humans of New York, created in 2010 by Brandon Stanton with the purpose of cataloging New Yorkers and their personal stories.

“I started following Humans of New York quite some time ago,” said Rafie, who uses a Canon Rebel t3i. “The idea was just so captivating.”

Last year, Rafie said she met with Garry Bowden, the creator of Souls of San Francisco, which she said motivated her to create her own project. She said he posted a picture of Rafie on his page later that year.

Rafie and Menendez said Humans of Emerson is not just a scrapbook of scattered photographs. They said it also serves to communicate deeper meanings that lie beyond the portraits.

“It’s not just about the photo,” Rafie said. “The conversation on the subjects brings you to understand more about them, and that makes the photo special.”

Menendez said the most important aspect about Humans of Emerson is not the physical quality of the portrait, but the relationship established by documenting the moment.

“The photo gets so much more value because it comes to life with the person,” she said. “Every photo with the caption shows their personalities and I think that is what we are aiming for.”

Pat Lopez, a freshman visual and media arts major, was the first to be photographed for the page.

“I have been a fan of Humans of New York for as long as I’ve known about it, she said. “Therefore, I naturally became excited over the Emersonian version.”

She said Rafie approached her after class on Halloween and asked to take her picture since she was wearing an elaborate panda costume.

“The concept is simple yet fascinating, and I think it’s a great project to start in the school since there are so many unique and interesting personalities,” she said. “It’s like everyone here has a world inside of them.”

Austin Wilder, a freshman visual and media arts major, had met Menendez a few weeks prior to the creation of Humans of Emerson.

“I was already Sara’s friend on Facebook, and so when the page was first created, I saw that she was tagged in Humans of Emerson’s photo,” he said. “My eyes lit up when I saw there was a page like Humans of New York for Emerson, and I yelled, ‘Finally.’”

Menendez asked to photograph him, so they set up a photo shoot on Halloween on Boston Common. Wilder dressed for the occasion and wore his homemade jack-o-lantern sweatshirt as his costume.

“I believe that the project is a great idea,” he said. “I think this page will feature the plethora of unique individuals that is the Emerson community, and connect people with one another in a variety of ways.”