Photos: A tale of two demonstrations on Beacon Hill 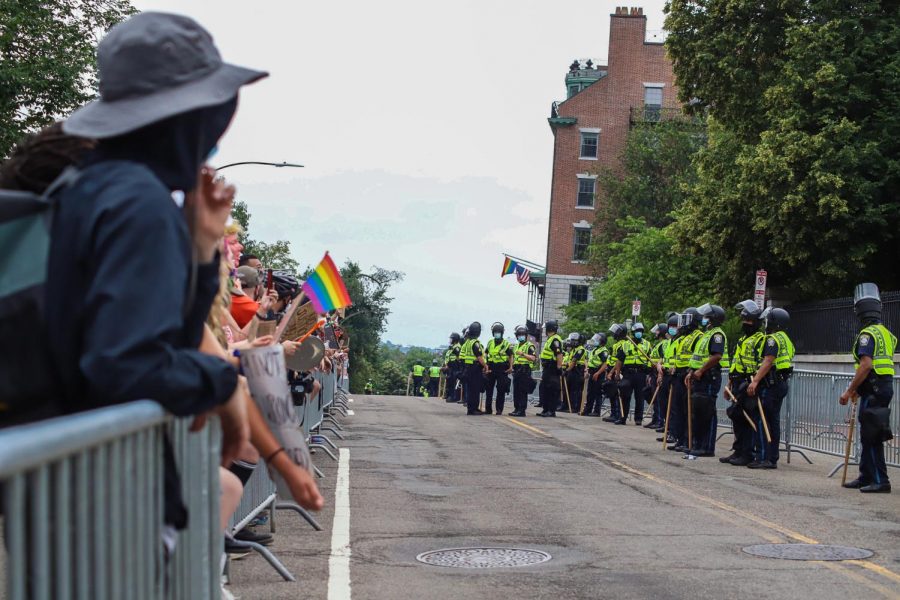 The protesters and counter protesters were separated by barriers on either side of Beacon Street and lines of police officers.

Two groups of protesters squared off Saturday in front of the State House. On one side, a local far-right political group hosted a “Restore Sanity” protest in support of police, and on the other, counter-protesters turned out for “All Out Against White Supremacy!”

The far-right protest was organized by a local conservative organization, Super Happy Fun America, to rebuke the nationwide protests against police brutality. SHFA organized last August’s Straight Pride Parade that resulted in a few violent clashes between organizers and counter-protesters. The counter-protest was organized by local community coalition Solidarity Against Hate and organizers urged Bostonians to show up in solidarity with communities of color.

After the SHFA protest dispersed, the counter-protesters marched off to City Hall where they formed an impromptu rally. Several members of the crowd gave speeches as they began to patter on the pavement. Speakers told personal stories of oppression and shared their fears of facing police brutality like many of their peers.

One of the speakers who addressed the crowd was Darrell Jones, a local man who was wrongfully incarcerated in 1986 for murder and spent 32 years in prison before being cleared in June 2019. Jones urged the crowd to continue pushing for justice but to also be open to having conversations with people who have differing beliefs.

The demonstrations Saturday come amidst a backdrop of nationwide protests against police violence and systemic racism. Thousands have peacefully poured into the streets in Boston in recent weeks, spurred by the death of George Floyd, a Black man, at the hands of a white Minneapolis police officer.