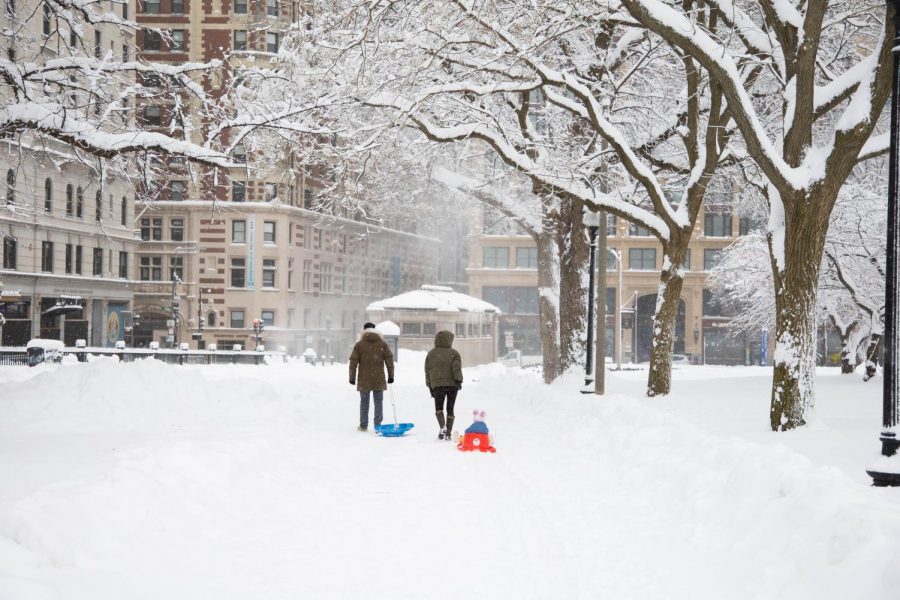 A couple sledding their child through the Boston Common.

By Domenic Conte and Diti Kohli

A thick, white blanket of snow descended on Emerson’s campus and the city of Boston Thursday, thanks to a storm that brought record snowfall, freezing temperatures, and heavy winds to New England.

It’s the first winter storm to hit the state in the midst of the COVID-19 pandemic, serving as a reminder of normalcy in an otherwise strange holiday season. Several government offices, state courts, and schools closed the day. Residents could be seen outside shoveling their driveways and the sidewalks. Snow plows lurched through the city.

Boston has seen more than seven inches of snow so far—a number that is likely to increase as the storm persists through the afternoon and early evening. It covered the Boylston Alley, the college’s Norman Lear statue, and the entirety of Boston Common and the Boston Public Garden. The National Weather Service predicts the city will experience up to 13 inches by 7 p.m.

Since classes ended on Dec. 9 and most students returned home ahead of Thanksgiving, the storm did not significantly impact campus operations. Administrators did not send out a weather advisory email or notify the community of any closures. Fewer than 30 students remain on campus through the break.

Regions of Western Massachusetts are slated to receive up to 18 inches of snowfall, and several areas of the state—specifically in Cape Cod and the South Shore—experienced sporadic power outages.