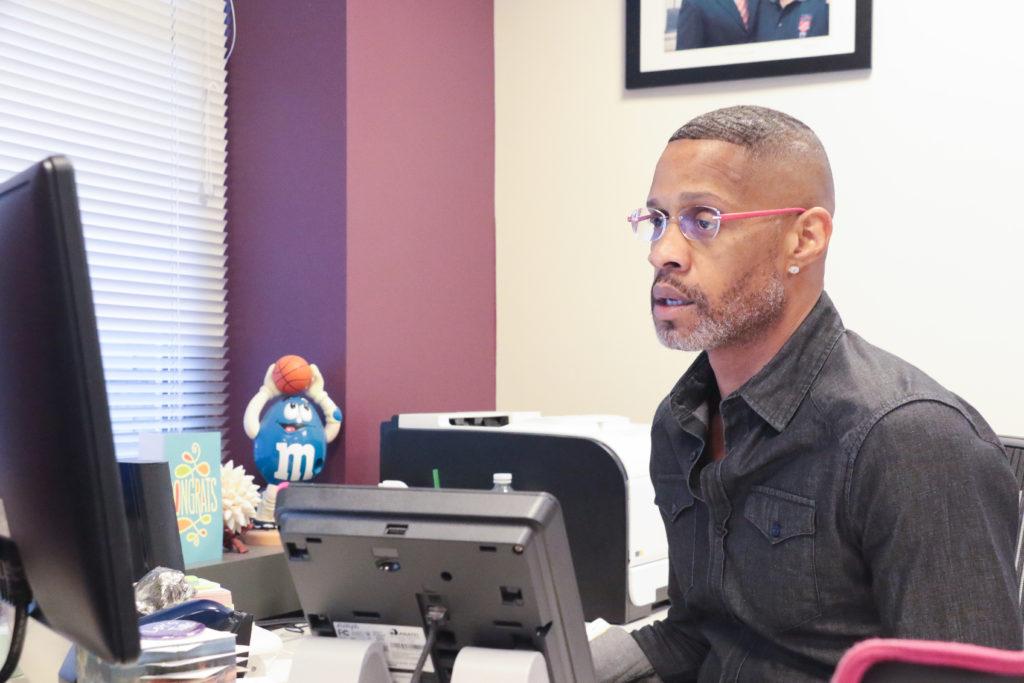 After almost a decade of working to create a hospitable environment for international students at Emerson, Anthony Pinder was named Emerson’s inaugural vice provost for internationalization and equity on April 21.

As vice provost, Pinder will oversee all of Emerson’s campuses, lead the offices of International Student Affairs, English Language Learning, and Education Abroad & Domestic Programs, and act as the college’s chief international officer—a role he has occupied since he began his career at Emerson.

“Part of my new position is really my old job anyway,” said Pinder, who served as the college’s assistant vice president for internationalization and global engagement for seven years, in an interview with The Beacon.

The biggest change to his responsibilities, he said, is promoting diversity and equity within academic affairs—something Pinder said stemmed from demands for a more equitable Emerson made by the student activist group Protest Oppression with Education Reform.

“The equity piece is, in part, a response to the institution’s increased interest and work around creating a more equitable environment and a more improved climate of belonging for everyone, especially within Academic Affairs,” he said.

As he begins his new position, Pinder said he holds his identity as a BIPOC member of the Emerson community close to his heart.

“I’m consistently reminded every day that I too am a member of the BIPOC community here,” he said. “I applaud the students for raising these issues and being so courageous. Now it’s time to align institutional responses that speak directly to the concrete issues that the students are raising.”

The intersectionality between academic affairs, internationalization, and equity is one most colleges do not make, Pinder said. He noted that he and his team have provided the Office of Academic Affairs with information about how to create an equitable environment for students for over seven years, though it was never a specified part of the job.

“Whether we want to be involved specifically with equity work or not, we are because we have hundreds of international students who struggle to acculturate to a new campus environment,” he said. “There’s a lot of things that are similar when we look at retention, persistence, and creating equitable and hospitable environments for people, so having [equity and academic affairs] connected will be very important.”

Pinder pointed to one of his first achievements at Emerson—the diversification of the Kasteel Well program—as a prime example of the work he plans to do in his new position.

“When I got here, seven years ago, mostly all white kids were going to the castle,” Pinder said. “That was alarming for me. I said, ‘This is insane. What would happen if we dramatically increased the number of diverse students?’ And then I thought about it, ‘Well, we can’t do that right away—this faculty, the staff, is not prepared.’”

Pinder said the Office of International Affairs dedicated a lot of time to providing faculty and staff with resources to make sure the castle could sustain a “dramatic increase” of diverse students. He and his team created training sessions—recruiting Dr. Sylvia Spears, vice president for equity & social justice, Tuesda Roberts, director for faculty employment and diversity, and Jeremy Heflin, associate director of english language learning—to teach the sessions.

“It was all the preemptive work that needed to go into the moment when those 90 students got off the plane and 45 of them were diverse,” he said. “We wanted our faculty to not go ‘Oh my God, what just happened?’ We wanted them to be ready, excited and prepared.”

Along with the sessions, Pinder appointed Tikesha Morgan to be the castle’s director of Student Affairs.

In his first month as vice provost, Pinder created two focus groups to gauge how BIPOC tenure track faculty have experienced their employment at Emerson.

“I was very interested, as a former faculty member and administrator, in how my BIPOC colleagues are feeling in this [community],” Pinder said. “Are their issues the same? What would they tell me?”

Pinder said he wants to strengthen the collaboration between the offices he interacts with and create “regular assessment points” to ensure these departments are meeting their goals.

“If we said we’re going to do something, then there’s a way to assess how effective we’re doing [it],” he said.

Pinder is optimistic about his future in his upcoming role, giving credit to his team for helping him over the last several years.

“If it weren’t for their ability to be so awesome, maybe this promotion would not be possible,” he said. “Having an incredible team allows the growth of our unit because it’s not just a promotion for me, as much as it’s an outgrowth of what we’ve been doing very well as a team.”

“[There’s] sort of like high in the sky kind of things that we want to do, most of which I’m proud to say we’ve done, [but] I’m excited to see where we go with this.”